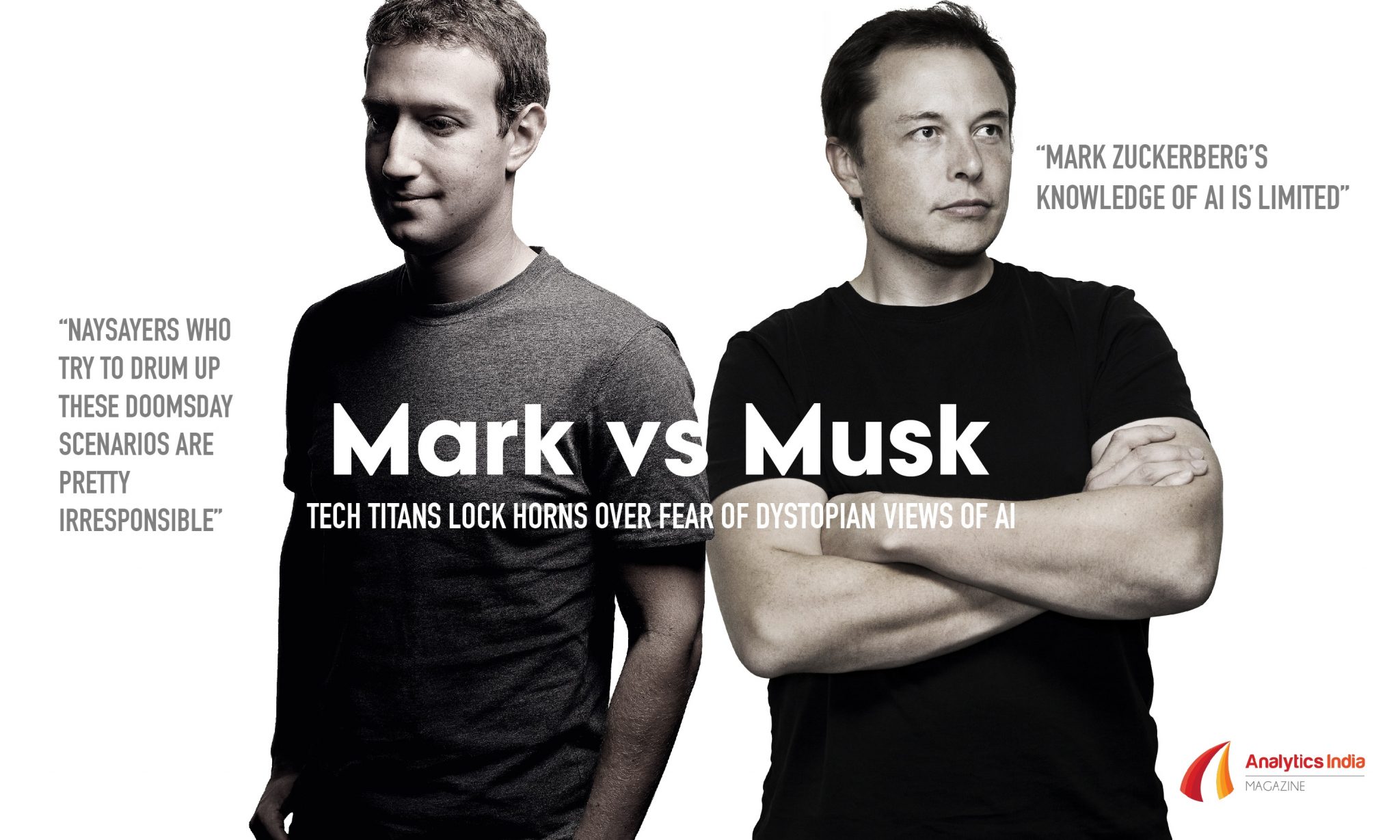 Facebook CEO Mark Zuckerberg has decidedly stayed away from controversies but this time the tech titan has locked horns with SpaceX and Tesla CEO Elon Musk over the purported fear-mongering statements. What started off as fielding queries over a FB livestream last weekend has snowballed into a verbal pow-wow between two of the world’s most admired tech leaders. Tesla CEO’s fears of robots taking over humanity are nothing new. It started off as concerns surrounding a robot apocalypse and he has voiced his fears regarding the rush to embrace AI. Over the last few years, Musk has taken a restrained stand on AI and why it should only be used for good. The futuristic CEO who is betting big on driverless cars, started NeuraLink and also co-founded OpenAI, a not-for-profit research company with Sam Altman that carries out ground-breaking research in AI.

Musk began the doomsday warning about a rogue AI three years ago. And reportedly, he perceives the colonization of Mars as a safe haven for humanity if AI systems start running amok. In fact, he even joked publicly that his “good friend Larry Page may produce something evil by accident” —including, possibly, “a fleet of AI-enhanced bots capable of wiping out mankind.” At a recent World Government Summit in Dubai, earlier this year, Musk’s fears of rogue AI surfaced again when he mused how an “AI scientist may get so engrossed in a research and invention, that he may inadvertently not realize the ramifications of their doing”.

In what is termed as a Battle of Billionaires or should it be Battle of Technocrats, Zuckerberg and Musk are dueling over their AI prowess. The Facebook CEO started the war of words during a FB livestream of his backyard barbecue where he dismissed  Musk’s doomsday statements as negative and pretty irresponsible. Not one to sit back, Musk took to Twitter with a cutting tweet that silenced his critic strongly, terming Zuckerberg’s knowledge of AI “limited”.  What’s next –  well the Twitterati has weighed in, leaning predominantly on Musk’s side.

The Tesla CEO’s industry counterparts may have deemed him “irresponsible” dismissing his comments as “fear-mongering”, but here’s where he’s right. Musk has called for Government regulation of Artificial Intelligence systems before it gets all too powerful.

Lobbying for AI in Congress is now serious business

We believe there is another way to view this battle. Globally, companies are plowing massive investment in AI research and R&D. Moreover, we have started seeing the benefits of AI and machine learning in public, with voice-based assistants, chatbots that form the first layer of interaction and robot lawyers among others.  Here’s what is happening. Venture capital investments in AI is soaring across the Silicon Valley. The reason is that American investors and technologists want to have an edge on the development of next-gen technologies around AI (deep learning and neural networks), robotics and self-driving cars to stave off competition from China that is also plowing major investment in the field.

Secondly, top companies are also investing in lobbying for AI efforts. Reportedly, Google hired government consulting firm Perry Bayliss Government Relations for actively lobbying for AI-related issues at Capitol Hill. IBM that has placed all its bets on the cognitive computing powers of Watson wants to sell the AI-driven services to Washington lawmakers. And IBM wants to put the doomsday predictions to bed, terming the fears as fantasy. David Kenny, senior vice president, IBM Watson and Cloud Platform, charged with spearheading the Watson technology platform development wrote a letter to Congress stressing the “real disaster in AI world would be abandoning or inhibiting cognitive technology before the full potential can be realized.” He further stated that the positive impact of AI is clear and the prophetic statements regarding “AI overload” and job losses are mere dystopian views.

Seems like the Partnership of AI, a consortium of biggies like Apple, Facebook, IBM & Google was set up to counter political constraints and not just to benefit people and society. In what seems like a positive move, lawmaker John Delaney, D-Md co-founded the Congressional Artificial Intelligence Caucus, an informal body of Democrats and Republicans studying the AI issue.

Here’s what we believe is right. There is no denying that mass-market arrival of AI will impact low-end jobs and overhaul the economic structure significantly. There will also be a demand for new skills in the AI era and ripple effects are already seen in manufacturing industry where machines are now working alongside men. But the industry is focusing on cutting-edge innovations that will improve people’s lives, reduce barriers and have a positive societal impact. But, a measured stance such as from Musk will help in regulating AI system.

Why is Kaggle’s upcoming challenge receiving so much flak?

Business Agility In The Digital Age