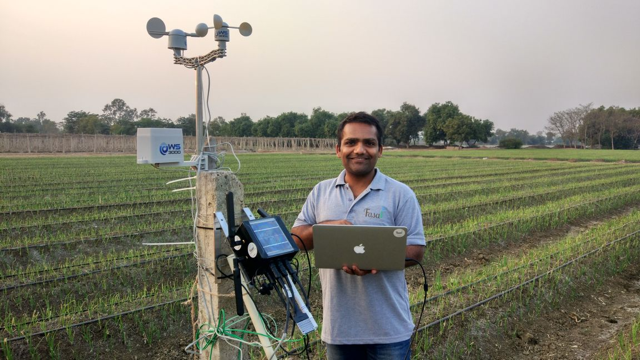 Fasal is an artificial intelligence startup that helps farmers increase productivity using advanced IoT and machine learning technologies was born out of minds of Ananda Verma and Shailendra Tiwari. Both belonged to families with a background in agriculture and shared a common passion for automated farming. The duo observed that agriculture in India and many developing worlds is based on traditional wisdom and guesswork. They looked inward towards their families and saw that farmers and seed producers faced day to day problems and saw an opportunity to address some core issues.

The initial funding for Fasal came from friends and family. Putting trust in Ananda’s ambitious efforts, his brother Arpit Verma and his friend Adarsh Verma funded Fasal in the initial days. The funds provided by families helped Ananda and team to validate their ideas and along the way, more friends like Vaibhav Singh Rajput chipped in to keep the dream of Fasal alive. All their patience was rewarded when Fasal was able to raise a pre-seed fund from Zeroth, an internationally acclaimed AI startup accelerator.

When asked about the first Fasal customers, Verma said, “It is a very interesting story. Fasal was put on a pilot mode for few months on five farms in Chhattisgarh where farmers profiles were very diverse. We also ran a pilot with Grover Zampa Vineyard in Bangalore. After using Fasal for some time all of them became our customers.” Talking about the immense value delivered to the farmers even in the initial days, Verma added, “Our customers were able to save water and increase their crop yield and quality and at the same time they were able to save input cost on sprays by following disease predictions made by Fasal. It is a great feeling for us to witness how Fasal is impacting farmers life.”

The startup mostly focuses on solving issues which are in the pre-harvest phase. Ananda says, “We are very crop focused and work with a number of crops primarily on Horticulture. We are increasing our focus to cover more crop in the near future which also includes tea estates and coffee plantations.” Fasal is also working hard on image-based crop health analysis and Soil Nutrition analysis. When these products work, they will deliver a great amount of insights into additional factors that impact farming on a day to basis.

Fasal currently is based out of HSR, Bengaluru and has 7 member team. The team works is distributed across product development, R&D, AI/ML and customer support. Fasal plans to hire more data scientists and also build a sales team in the near future. To expand into many more Indian states Fasal is looking to raise a seed fund shortly adding to the pre-seed raised with Zeroth.

Talking about the agricultural ecosystem in India, Verma said, “The Indian food industry is poised for huge growth. The Indian food and grocery market is the world’s sixth largest, with retail contributing 70 per cent of the sales. The Indian food processing industry accounts for 32 per cent of the country’s total food market, one of the largest industries in India and is ranked fifth in terms of production, consumption, export and expected growth. It contributes around 8.80 and 8.39 per cent of Gross Value Added (GVA) in Manufacturing and Agriculture respectively, 13 per cent of India’s exports and six per cent of total industrial investment.”

All these stats point to the fact that technology interventions will be a huge part of doubling farmers’ income by 2022. And technology in farming is not an easy problem to solve. Fasal has huge plans going ahead.  “We would like to see Fasal in every farm in India in coming years and farming on auto-pilot. We are on a mission to help farmers grow more and grow better and we would like to make sure that they also sell better. A very far vision is – Fasal should be able to tell you what crop you should grow this season for a better outcome and what will be the market price once you harvest.”, Verma said.