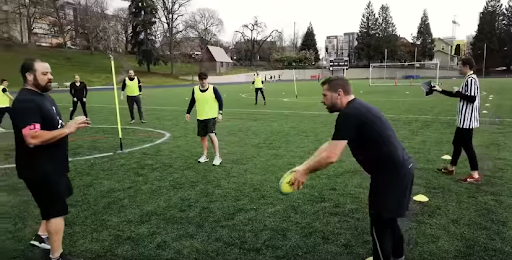 7 Ways Data Scientists Can Get Over Monday Blues & Maximise Productivity From brutal war games to PUBG, humans have found one way or the other to entertain themselves by engaging in a competitive sport. The advent of video games and the advancement of chips have confined hobbies of many to a screen.

The games and the strategies applied to win them online is considered prestigious and there are platforms where the gamers can win hefty prize money. The game developers have gone to the extent of using AI to make the game more challenging.

In a first of its kind, an attempt has been made to use computers to nudge people to play outdoors. The team at AKQA trained a recurrent neural network and a DCGAN(deep convolutional generative adversarial network) on more than 400 sports.

The neural network came up with a sport called Speedgate with new rules which is a mish mash of rugby, soccer and a bit of  hockey.

“Speedgate is fun, fast and physical, relying heavily on teamwork and passing to score and win,” the company wrote in a post. “Going all out for victory is applauded, but it should never come at the expense of having an awesome time. Speedgate is all about enjoyment, inclusivity, and sportsmanship.”

The rules of Speedgate are simple, players team up in two groups of six, and try to kick or pass the ball into a gate at either end of the field. To do so, they need to keep the ball moving every three seconds. However, they cannot cross a circle in the middle of the field. Teams can either get two points by kicking the ball through the gates at either end and three points for ricocheting the ball through the gate.

Speedgate is one of the 3 sports that were finalised from the results.  The algorithm came up with many original yet outrageous ideas like underwater parkour and exploding Frisbee, which were dropped for obvious reasons.

A variant of RNN called the textgenrnn probably was deployed for coming with results like above. Recurrent neural networks(RNN) belong to family of artificial neural networks, which unlike feedforward neural networks, can be used for processing sequence of inputs with the internal state memory. Their temporal dynamic behaviour (time varying activations at each node) made them popular with tasks such as handwriting recognition and speech recognition.

Text generation with RNN can be done on Python using module textgenrnn which has the following features:

The interesting thing about Speedgate is the rules can be customised and its success will pave the way for more new crazy ideas, which will put the physicality back in sports.

Learn how to use TextGenRNN here

Know the rules to play here

Elon Musk’s Big Message: Not Just An Electric Carmaker, But A Tech Powerhouse

7 Ways Data Scientists Can Get Over Monday Blues & Maximise Productivity

What Are The Challenges Of Training Recurrent Neural Networks?

How To Code Your First LSTM Network In Keras