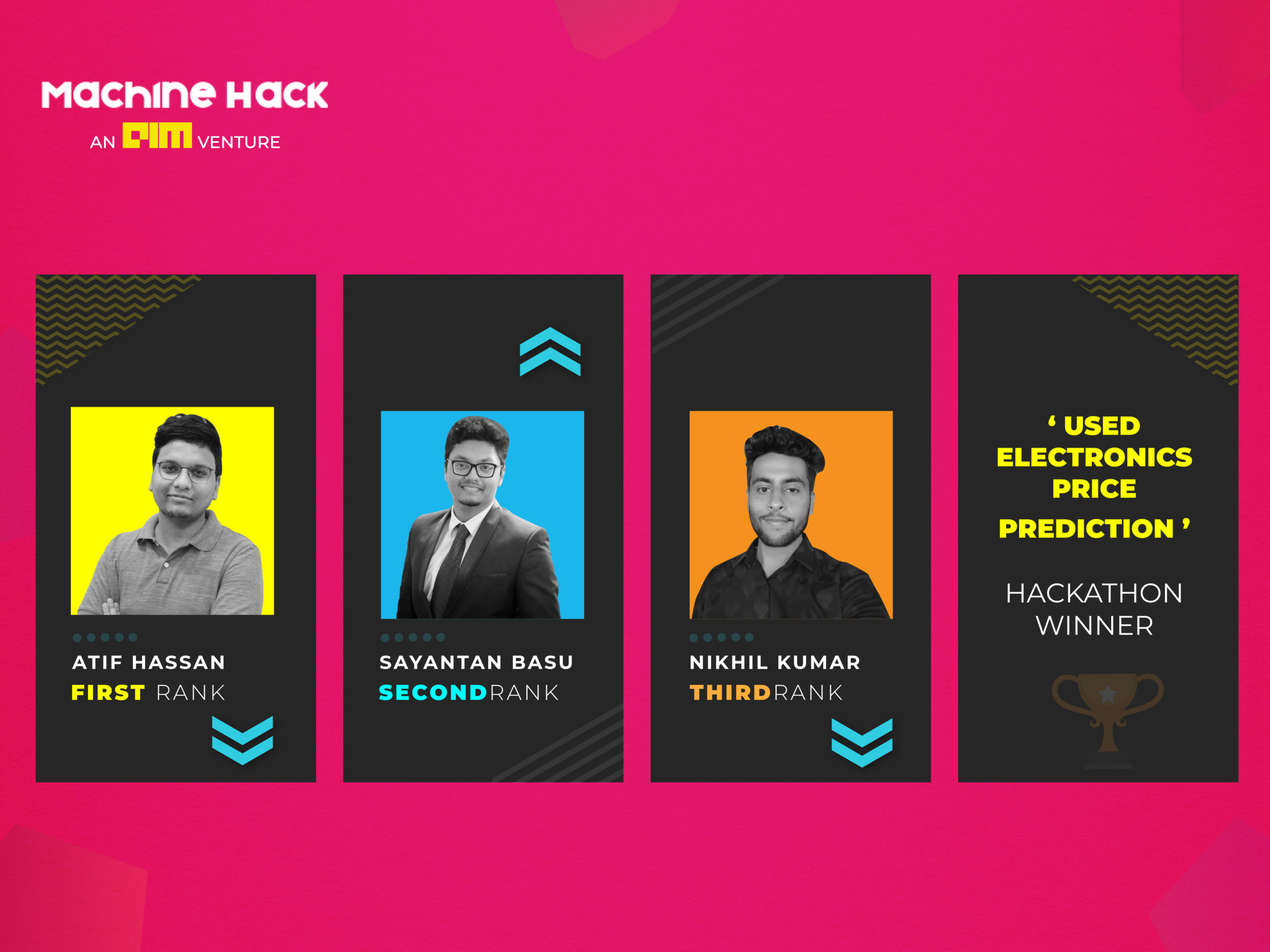 MachineHack successfully concluded its seventh instalment of the weekend hackathon series last Monday. The Used Electronics Price Prediction hackathon was greatly welcomed by data science enthusiasts with over 300 registrations and active participation from over 100 practitioners.

Out of the 117 competitors, three topped our leaderboard. In this article, we will introduce you to the winners and describe the approach they took to solve the problem.

Atif has always been fascinated with the idea of building something intelligent out of one’s own logic. As a high school student, he worked on fusing games with evolutionary algorithms. During his graduation, he worked on various ML-based projects such as topic recommendation systems, classification of scientific articles, etc.

His curiosity directed him into choosing data science as his career while doing his Masters at IIT Kharagpur. He is an active participant in many hackathons across platforms such as MachineHack and HackerEarth.He has also published two different novel algorithms on topics related to the data-mining and bioinformatics fields with another one on NLP, currently in review.

With all his skills and determination, he hopes to join an R&D department in the industry/government and simplify the lives of all his fellow Indians using data science.

Atif explains his approach as follows:

I treated this competition as an aspect-based extraction problem. My approach can be summarized in seven separate techniques.

“MachineHack is a great platform where one can practice his/her theoretical concepts and further their practical knowledge by a large extent. Due to the talented competitors on the leaderboard, one is really pushed to their limits to solve the problem, thus helping a person improve a lot. The hosting, submission and leaderboard of all challenges are seamlessly put together by the platform that allows participants to quickly take part in competitions as well as perform fast re-iteration of their models.” – Atif shared his views on MachineHack.

Inspired by his ML professors and a few of his seniors at IIT Kharagpur, Sayantan started his work in the field of data science and machine learning in 2015. The unavailability of formal courses on the subject in his college made him sporadically go through a variety of online resources. In 2017, he got a chance to work on an NLP based project, and since then he has never looked back. Later in 2018, he joined IIT Guwahati as an M.Tech student where he took formal courses and built the basic concepts of machine learning.

Even though he has been in the field for over half a decade, he still feels that he has only scratched the mere surface of this fast-paced field, where there is a new advancement every day. He acknowledges his seniors and friends who have inspired him and helped him improve a lot over the years.

“The competitive platform really motivates people to push towards gaining more knowledge.” – he shared his opinion on MachineHack

Nikhil is currently a final year Computer Science Engineering student at Pesit South Campus, Bangalore. He started his data science journey during his second year after being inspired by a YouTube video on self-driving cars. The technology intrigued him, and he was driven into the world of ML. He started with Andrew NG’s famous course and applied his knowledge in the hackathons which he participated in.

Kaggle’s Microsoft Malware Prediction hackathon — in which he finished 25th — was a turning point in his data science journey as it gave him the confidence to take it further and challenge himself with more hackathons on MachineHack and other similar platforms.

Nikhil has been actively participating in hackathons amidst the lockdown, winning and ending up in top 3 for several competitions. He wishes to contribute and make an impact in the data science community.

“MachineHack is an amazing platform, especially for beginners. The MachineHack team is very helpful in understanding and interacting with participants to get doubts resolved. Also, the community is ever-growing, with new and brilliant participants coming up in every competition. I intend to continue using MachineHack to practice and refresh my knowledge on data science,” says Nikhil about his experience with MachineHack.

Check out new hackathons here
What Do You Think?