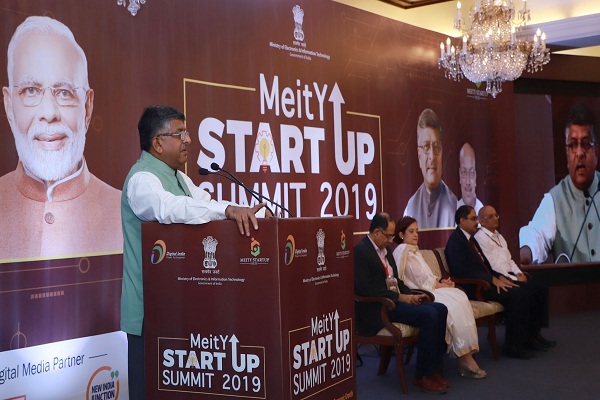 Ravi Shankar Prasad, Union Minister for Electronics and Information Technology, initiated the MeitY Startup India Summit this week. The event brought together many industry leaders, government officials, entrepreneurs and venture capitalists under one roof to discuss how regulators can boost the startup ecosystem in the country.

During the inauguration, Prasad said that the Digital India programme is finding worldwide reverberation. He added that the “digital hunger” across the country should be tapped, and instructed the officials to digitally map entrepreneurs and innovators in rural India.

“Innovation ought to be utilised to change rural India and make roads for those in small towns and Tier II and Tier III urban areas,” said Prasad during the event. He likewise propelled a software products library which will go about as a single-window point to examine Indian software product database. The Minister said that Digital India ought to turn into a reference point for inclusion, healthcare training and entrepreneurship.

Here are the other key takeaways from Startup India:

Talking about how utilising innovations like artificial intelligence would catalyse the financial development of India, Union Minister Prasad unveiled the MeitY Startup Hub (MSH). The hub is viewed as a stage forward towards uniting key partners and new businesses under one rooftop. Further, they will work with specialists to catch feasible procedures to bring the focal point of funding and government around their methods and systems. The platform will use and bring startup mediation program to the software technology parks of India (STPI). They are intended to advance business enterprise and make a supporting system for STPI CoEs in technologies, including digital payments and fintech, blockchain, IoT, artificial intelligence, etc.

As a nodal office, software technology parks of India (STPI), an association under MeitY, is used for executing the startup hubs. STPI has so far made 28 centres of excellence (COE). During the MeitY Startup Summit 2019, STPI further signed four Memorandum of Understandings (MoUs) with Intel India, IIM Calcutta Innovation Park, Pontaq and IBM. Furthermore, these MoUs are additionally expected to interlink startups with VCs, enterprises and government offices.

These MoUs can likewise be viewed as a considerable advance forward for different STPI CoEs like IoT OpenLab at Bengaluru, ESDM incubation unit at Bhubaneshwar, VARCoE at Bhubaneshwar, Autonomous Connected Electric Shared Vehicles, CoE at Pune, MedTech and wellbeing informatics CoE at Lucknow, Rural and Agri IoT CoE at Guwahati, BlockChain CoE at Gurugram and IoT in Agri CoE at Patna-Motihari and others.

Addressing the concerns related to the state of intellectual property in India, Prasad announced the patent grant timeline from four years currently to less than a year. This is to help innovators in the fast-moving pace of global innovation. “India should become a big centre for patent and Intellectual Property,” the Minister said.

To empower documenting of International Patents, a Scheme Support International Patent Protection in Electronics and IT (SIP-EIT) has been set up. Under the plan, MeitY expects to give money to help support Educational Institutes, MeitY societies, and so forth, for arranging courses and workshops on IPR mindfulness among different partners.

Indicating trust in the capacity of new businesses to bring development and drive business in the Indian economy, PM Modi had said that the thriving Indian startup space would assist India with achieving the $5 trillion focus for the economy. The Startup India plan has assumed a remarkable job in directing the enterprising soul of India’s trailblazers and has infiltrated Tier II and III markets as well. With a lot of activity from the local and state governments, new businesses and beginning time organisations have been given each support and impetus to develop and innovate. At present, India has around 23,974 DPIIT listed companies in the nation.