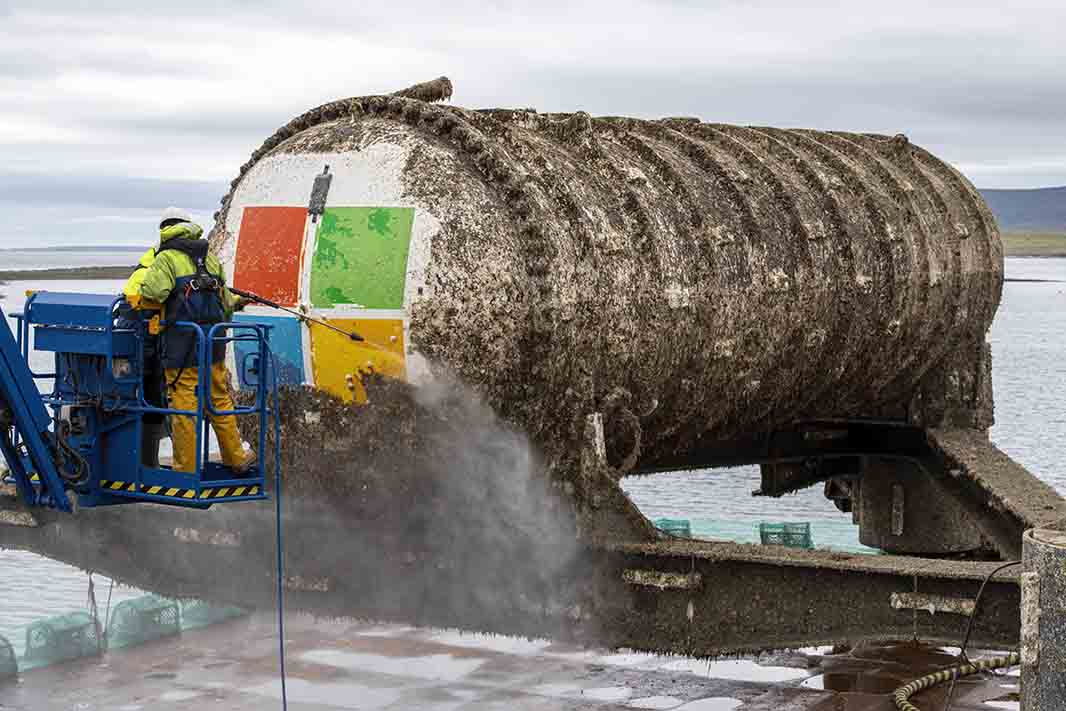 “Microsoft’s deployed the datacenter 117 feet deep to the seafloor in 2018.”

Data centers are the lifelines of all things internet. The movie that you streamed last night and the photos you have shared online work the way they work, thanks to these power-hungry data centers which squat in the outskirts of cities occupying large real estate. So what is an alternative to the non-land, non-power issue of data centers? Deploy them underwater.

Microsoft has been experimenting with this idea for over 5 years now with their Project Natick, and the results are finally out. Microsoft’s team recently have proved the underwater data center concept was feasible and the concept is practical.

How Microsoft Made It Work

Microsoft came up with this idea of the underwater datacenter concept back in 2014. The objective here was to deliver lightning-quick cloud services to coastal populations and save energy.

The team at project Natick then deployed the prepacked datacenter units to operate lights out on the seafloor for years. The project’s Northern Isles datacenter has been humming away 117 feet under the sea in Scotland since June 2018.

Phase 1 of this project ran into issues like biofouling. With phase 2 however, the team made some radical changes. According to Microsoft, Nitrogen did the trick. The atmosphere of nitrogen is less corrosive than oxygen, and with less people around the components, the performance of this project has dramatically improved from their previous run.

Added to this is the consistently cool subsurface seas that allow for energy-efficient datacenter designs.

The data center was deployed at the European Marine Energy Centre, a test site for tidal turbines and wave energy converters. The retrieval of the datacenter required calm seas and a choreographed dance of robots and winches.

Once hauled, the container-sized data center was driven back to the garage to perform health checks on the server racks and other components. With the results in their favour, the researchers are now contemplating how to translate this success to a larger scale – on land. Team Natick thinks that this hardware will help them understand why the underwater datacenter servers are eight times more reliable than those on land.

Why Have It Underwater

Right from the choice of location to the anticipation of growing demands, the team at Project Natick left no stone unturned. For instance, the Orkney Islands were selected because the grid there is supplied 100% by wind and solar.

Project Natick has shown that data centers can be operated and kept cool without tapping freshwater resources. For Ben Cutler, who leads the research for Project Natick, the success of Phase 2 already has opened up possibilities such as an underwater datacenter co-located with an offshore wind farm. Cutler thinks that even the light winds would be enough to run the datacenter.

The proven reliability of Project Natick, has already garnered attention from the team at Microsoft Azure. Now they are looking to serve customers who need to deploy and operate tactical and critical data centers anywhere in the world.

According to Microsoft, underwater data centers can help serve customers located near large bodies of water. Deepwater deployment offers ready access to cooling and a controlled environment and has the potential to be powered by co-located renewable power sources.

To summarise, the success of underwater data centers can mean the following:

A 200 km round trip to the data center takes about 2 milliseconds and 40 milliseconds if 4000 km away! This gives an idea of the importance of proximity. Apart from this, Microsoft has been vociferous about their green initiatives. In order to achieve carbon neutrality, they have been experimenting with all kinds of renewable energy sources. Project Natick sits at the cusp of these ambitious initiatives by Microsoft. Team Natick also stated that they use AI to monitor the servers and the computers inside Natick can be used for machine learning applications just as in any other Microsoft data center.