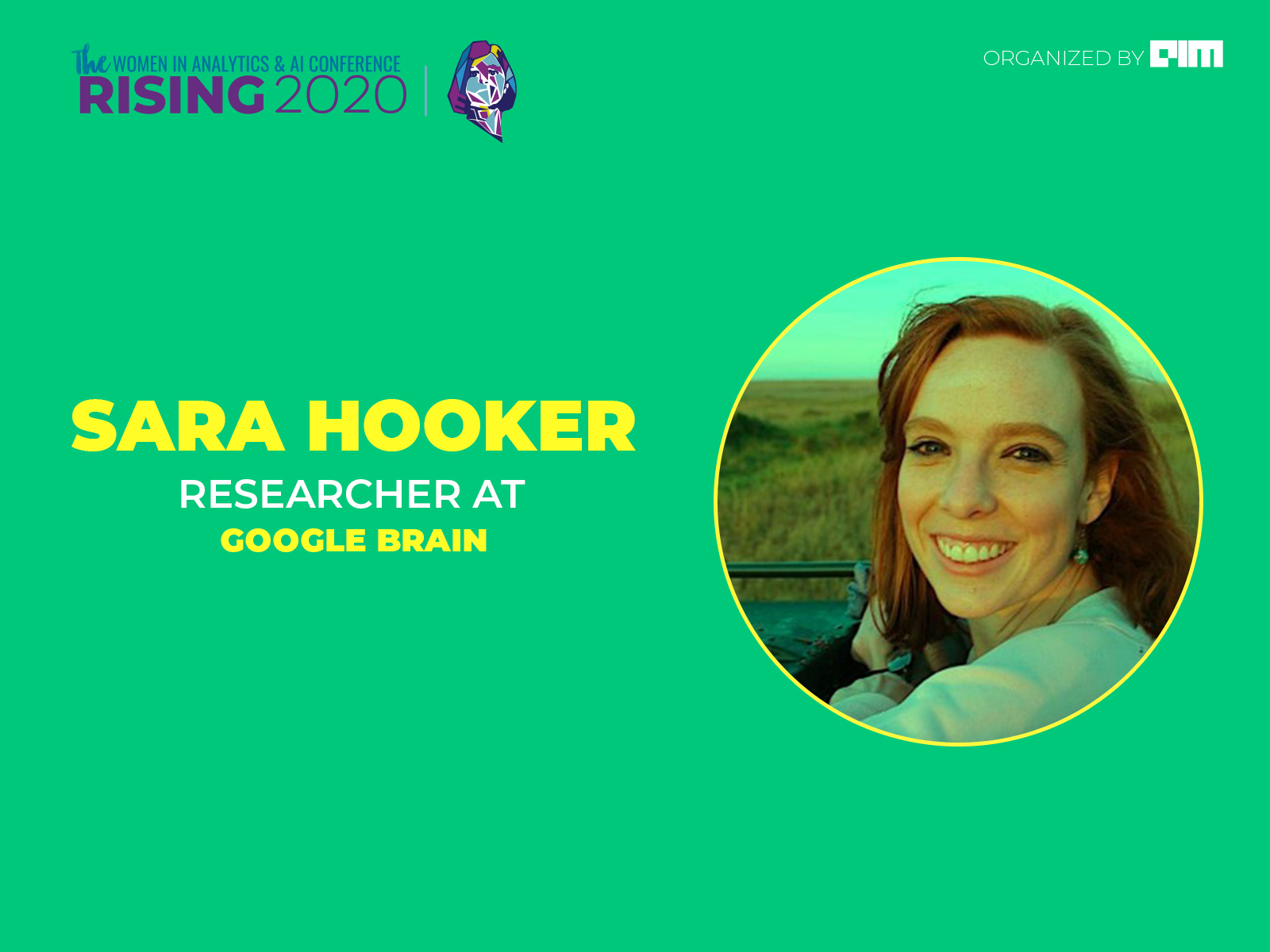 The first day of The Rising 2020 started with an informal session with Sara Hooker, a researcher at Google Brain where she shared some of her personal reflections on how to navigate in the field of machine learning and why we need to celebrate failures as well as success.

Sara started her session with a simple story where she shared her childhood dream of being featured in the magazine, The Economist. In fact, she mentioned that “one of my goals was to eventually be an economist.” However, when that happened in 2016, it wasn’t a pleasing feeling for Sara; instead, it was a feeling of “unease” and seemed problematic. A lot of this could be attributed to the article that The Economist did, which profiled the efforts of fast.ai, a course that’s run by Jeremy Howard and Rachel Thomas, and utilised Sara as an example of their success. The article stated — “A graduate from fast.ai’s first year, Sara Hooker, was hired into Google’s highly competitive ai residency program after finishing the course, having never worked on deep learning before.”

“… because this makes it seem as if success is overnight that you just do a six-week course, and then you enter Google,” which indeed wasn’t the case with Sara Hooker. “It isn’t a Cinderella story; in fact, there is much work and sweat that goes behind it,” said Sara.

(excerpts from the talk)

With a vision to be an economist for the World Bank, Sara’s wasn’t very much exposed to computer science at her young age; however, things changed when she received a scholarship in Minnesota, the US for an economics degree and moved to San Francisco for joining an economic consulting position. It was an exciting job for Sara, where she applied economic modelling and statistics to real-world datasets.

Even with this, Sara wasn’t satisfied with the work she was doing for her community. “And in part, I felt that what I was doing was so different from the communities I had grown up in, and, I wanted to somehow bridge that gap that the technical concentration of talent that I saw in my first job. I wanted to reconcile that with the lack of technical talent in the communities where I grew up.”

And to resolve this, Sara started working at a nonprofit, with a few other economists, where she began offering her data skills to other nonprofits helping them with their economic modelling problems. They saw massive growth in the same, and decided to build a nonprofit organisation Delta Analytics. “… it grew because there were a lot of problems that needed to be solved, as well as a lot of people who want to work on it. So we ended up working with economists, software engineers, data analysts, researchers.”

Delta was a turning point in Sara’s life, as she started dealing with the data of the partners, which were usually “very messy and unstructured.” The work was to “use a lot of assumptions about the data to simplify it, and impose linear models which in many cases “were not sufficient.” With such exciting cases to solve and people to meet, Sara got interested in the field of complex modelling. “I became almost obsessed overnight with understanding more about the more powerful tools to model the world around me.”

With this turn of events, Sara decided to join Udemy, with a goal to teach “anybody anything, and it still is.” Sara mentioned how during her tenure in Udemy, her boss pushed her potential to try out more challenging projects. One of the key projects she has worked on is detecting Udemy’s fake reviews, where she collected data and developed the algorithm. “This project involves an algorithm piece, but then a deployment piece. And so I developed the algorithm, but then I handed it off to the engineers to deploy.”

Going a step further, she wanted to be more technically adept. “At the time, I was using SQL, which we use for economic consulting and small scale modelling. And I decided I had to learn a much deeper engineering stack. And this is where I began What I would call the brute force stage of my career.”

The Turn Of Events

Sara started with part-time online classes at Hackbright, where she practised coding, which was appreciated by the Udemy leaders and Sara was transferred internally to the engineering team. “And that was a key turning point because now I was working Within the engineering machine learning team, and my whole day was learning.”

Two important case studies Sara shared during the session was — Kiva Loans Kenya and Enza Education. “And all this taught me that both these examples and the many other projects that delta worked on, really impressed upon me that technology has an impact on or affects all humanity. And that these patterns are patterns that require local expertise. And in many ways, you don’t see these features in the data unless you have the domain expertise of having diverse eyes on it.”

And that’s when Sara decided to teach the fundamentals of machine learning to bridge the skills gap and bring more capability in the industry. “I felt like there had been such a compressed learning period for the four years prior. And I learned so much, and I felt like it was important for me to try and articulate some of what I had the opportunity to learn.”

She even believes that teaching is a wonderful way to learn more. “And this is what we did: it was myself and five other data scientists and researchers, and we developed a curriculum, and we went to go teach a pilot in Kenya.” The initiative grew big, where now the team accepts teaching fellows from all over the world. “teaching is often a remarkable way for you to reflect upon what you’ve learned, as well as to communicate about your technical ability in a much more powerful way.”

And, post the teaching fellowship Sara returned to the US to join Google’s AI residency programme, where she worked on a paper called — “A Benchmark For Interpretability Methods in Deep Neural network,” which after a lot of rejection was well received by NIPS and ICML.

These rejections made Sara realise that this wasn’t the goal she was actually working for. “I felt like the first year I almost lost a sense of myself a little because I was so focused on hitting a rubric of what I thought was a success, made me forget a little bit, in many ways, my own definition of success.”

So, as Richard Hamming said, “If you want to do great work, you clearly must work on an important problem.” This quote made Sara realise the real work that she wanted to do that is solving more significant humanity problems. And that’s why she started directing her work towards a broader problem.

This made Sara understand the importance of using her technical abilities for more real-world human problems. “I start to think about the wider problem I was trying to solve, and what is the wider research contribution I want to make, and that’s why a lot of my research is centred on how do we measure model performance beyond test accuracy and how do we train models with multiple cyber properties? Models should not just top on the accuracy, but they should be compact, secure, fair, and interpretable. Then it becomes less about the individual conferencing acceptance, and it becomes more about your overall goal because the truth is, that inevitably when you take risks, and you work on interesting problems and eventually new solutions, it takes time,” concluded Sara.