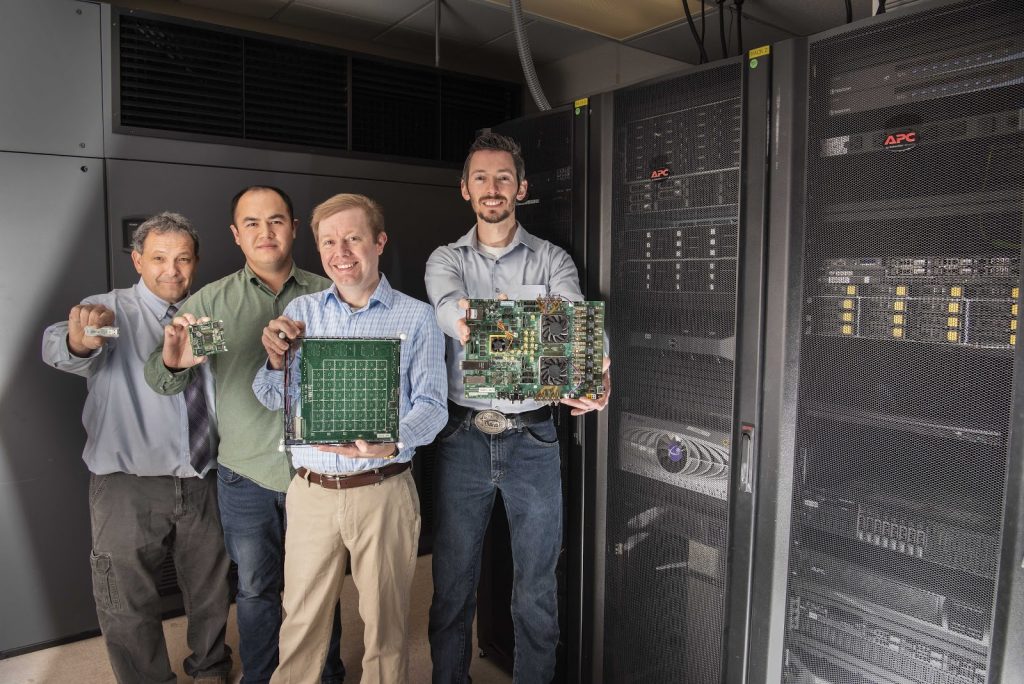 An average ImageNet resolution is 469 x 387 and it has been proven that by increasing the size of an input image, the final accuracy score of a classifier increases. To fit the current accelerator memory limits, most models are made to process images of sizes 299 x 299 or 331 x 331.

Sandia National Laboratories introduce Whetstone, a method to bridge the gap by converting deep neural networks to have discrete, binary communication. It was developed with the Sandia National Laboratories’ Laboratory Directed Research and Development (LDRD) Program under the Hardware Acceleration of Adaptive Neural Algorithms Grand Challenge project and the DOE Advanced Simulation and Computing program.

Large networks need more space as they consist of more parameters. The storage capacity becomes an issue in applications like processing of information in self-driving cars and smartphones.

Currently, accelerators like NVIDIA’s Volta and Intel’s Nervana are few architectures with dedicated Tensor Core which target the deep neural network inferences for operations like multiply and accumulate.

But the researchers at Sandia wanted to fully capture the emerging landscape of deep learning architectures by addressing optimal network performance mathematically by using low-precision weights and discrete activation functions.

This is where neuromorphic hardware has come into picture. IBM’s TrueNorth is one which has managed to achieve low-power performance by coupling spike-based data representations.

The researchers at Sandia were able to achieve network configuration for a spiking hardware target with less loss. These networks used single time step binary communication unlike other spike-based coding schemes.

To demonstrate the effectiveness and reliability of Whetstone, the researchers used popular image classification datasets like MNIST, fashion MNIST, CIFAR and others for comparisons.

For neuromorphic hardware to work effectively, it is essential to convert an ANN to a SNN(spiking neural network).

The word ‘spiking’ is synonymous with the action potential of biological neurons.

In SNN, when a spike occurs, a key state variable gets communicated. The SNNs, at minimum, requirews neurons only communicate a discrete event or nothing. Either  ‘1’ or nothing.

The neuron activation functions are adjusted during training (green inset), by approximating the spiking behaviour of a neural network.

While testing for adequacy of the output layers for 1, 2,4,8 and 16-hot encoding, the researchers found that any classes which represent a dead node introduce a misclassification which resulted in a 10% penalty on the MNIST.

Whereas, 4 hot encoding surpassed the performance levels of 8 and 16-hot.

To avoid the dead nodes, the researchers tried to replace bRELU with a sigmoid layer followed by a softmax function because bRELU will result in dead nodes upon sharpening.

The compatibility of Whetstone with several non-classification neural networks applications like autoencoders makes it more prone to adoption .

Next generation of AI technologies should be able to comprehend commands by working on the huge background of information in a fast paced environment. To make these machines smart, we need to enhance the capabilities on the hardware side as well to make them more energy efficient.