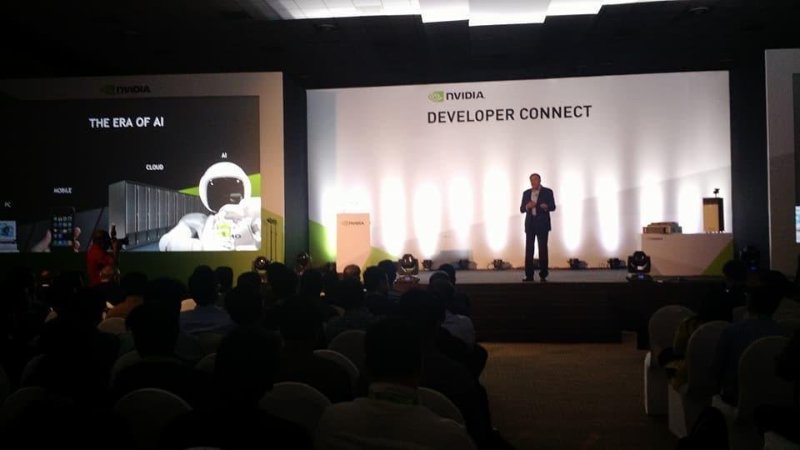 In the recently concluded NVIDIA Developer Connect in Bengaluru, it saw immense participation from students, developers, academicians, data scientists and senior decision makers, all alike. Beginning with the concept of “I am AI”, Shanker Trivedi, Senior Vice President, NVIDIA Inc. explained how the world has progressed from an era of computer to cloud and now to artificial intelligence. “While AI has been integrated in many areas, the key to AI is coding, and the developer connect is a platform that intends to connect developers around the country”, he said.

“The traditional computing model of Moore’s Law is running out of gas. This is one of the reasons why we need to look at other computational models, and this is where AI comes into picture’, said Trivedi while addressing the crowd. He further added that starting from 2012, there has been a rise in the concepts like neural networks, which people started adopting as a way to generate super fast results, but now AI computing has taken the center stage.

Explaining how GPU accelerates what CPU does in normal computing, he said that NVIDIA GPU has been performing at an exceptional speed, and has has been adopted by many leading players in the industry—including the Nobel Prize winners in Physics and Chemistry.

Their key contribution in AI and VR:

Giving a live demonstration of how NVIDIA is working extensively in the area of AI and VR, the audience were made to experience their newly launched project—Holodeck, that empowers designers, peers, and stakeholders to collaborate in a 3D virtual environment. It allows to explore each and every part of the machine with much detail. He said that AI is going to help designers with suggestions such as what kind of material to use, how many bolts to use etc.

With companies like Microsoft, BAIDU, Google using NVIDIA’s deep neural network, voice and speech recognition, Trivdedi mentioned about other offerings that the company boasts such as Tesla V100, the most advanced data center GPU ever built to accelerate AI, HPC and Graphics. “Powered by NVIDIA Volta, Tesla V100 0ffers the performance of 100 CPUs in a single GPU”, he said, thus enabling data scientists, researchers, and engineers to tackle challenges that were once impossible.

Others that he mentioned were NVIDIA DGX station, which the company claims to be the world’s first personal supercomputer for leading-edge AI development, the recently launched NVIDIA Titan V, TensorRT, a high performance deep learning inference optimizer that delivers an unparalleled inferring performance, amongst others.

He also spoke about how self driving cars is becoming a key area of development at NVIDIA. “Approximately 11 billion miles of drive is required to simulate all driving condition for a car to learn self driving, which is humanly impossible to feed. We have built our own supercomputer to do so, and this is possible without huge machinery occupying the luggage space, as it normally would have been the case”, he said.

He further added that though self driving in India may never exist, but there are other forms of AI applications that can take a center stage in India—such as robotic surgeons and others. He spoke about Jetson TX2 Module that is the most power efficient embedded AI computing device that let’s program the robots and autonomous machines. “It can also help in building AI cities and safer and smarter cities”, he added.

There were other interesting insights at NVIDIA Developer Connect, where industry leaders from the likes of Ola, Oracle, Microsoft, HP, Shell and others shared their interesting uses cases of how they have been leveraging artificial intelligence, machine learning in developing better solutions and user experience.