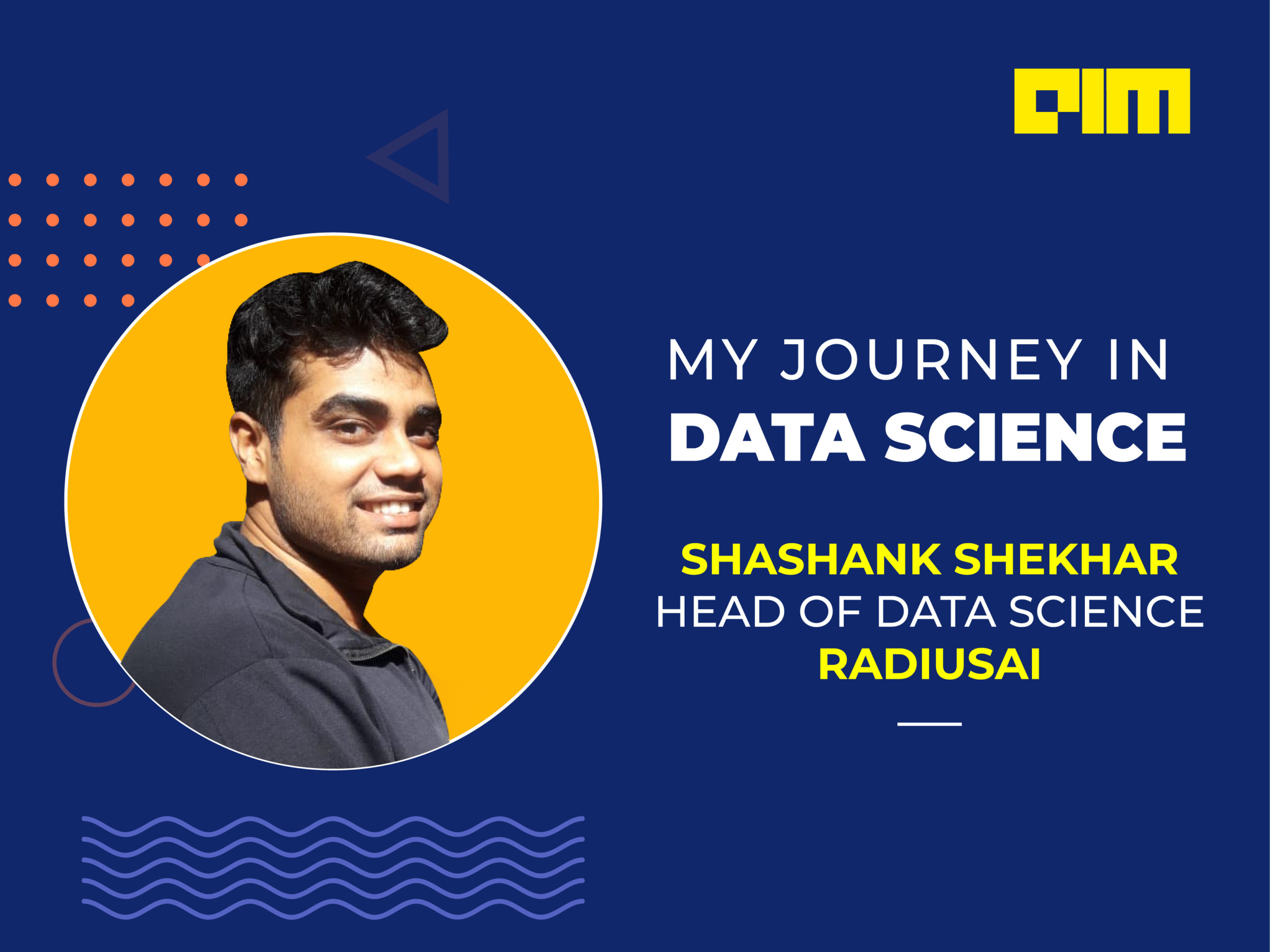 Data science aspirants have a lot to learn and retain to succeed in the highly competitive landscape today. However, since the field is vast, one cannot master every machine learning technique. It is necessary to follow the right learning path to differentiate yourself from others. But learners mostly focus on taking online courses and trying to gain everything from these lessons. This makes them a jack of all trades and master of none, thereby failing to land a job.

To help aspirants in making wise career decisions, Analytics India Magazine, for our weekly column, got in touch with Shashank Shekar, Head of Data Science at RadiusAI, to know what strategy makes him successful in this competitive domain. Shashank has worked for five-plus years at various companies, such as Lumiata, Amino, HyperTrack, and RadiusAI. He has worked on financial healthcare, medical diagnostics, GPS data, and more.

After completing his graduation in bioengineering from IIT Guwahati in 2013, Shashank pursued Masters in Boston University in system engineering and landed a job at Lumiata in 2014 as a data scientist. However, he was not focused on becoming a data scientist during his education years. Instead, Shashank was interested in computational biology. During his graduation, he used applied maths on biological data for various projects using Python, which he learned in his second year. “I used to program since my high school days, and learning Python had nothing to do with data science — it was for solving academic problems and research,” explains Shashank.

Shashank said that he joined Lumiata because he got an opportunity to work with medical data. Irrespective of the designation, he was passionate about working on medical diagnostics to build prediction models. However, at the end of his second job, he realised that data science by itself is a vast field.

Since Shashank had domain knowledge, which he acquired through his experience while doing an internship at the University of Cambridge and Khorana Scholarship program at the University of Wisconsin-Madison, he was hired as a data scientist due to his knowledge in optimization, dynamical systems, and graph theory. “Lumiata was looking for a data scientist who could write scalable graph algorithms on healthcare data. So I got into the field, and then, as I worked on various projects, I picked up other data science skills like statistics, probability, and data modeling,” says Shashank.

Talking about his learning strategy, Shashank said that it is problem-driven. He does not acquire knowledge in data science that he would not require. The data science landscape is vast, and continuously shifting focus will be ineffective. “I did not learn data science; I tried to pick up tools that were needed to solve the current problem and progress from there,” says Shashank. “It was difficult for me to pick up various aspects of data science, but my colleagues played a vital role in my learning process,” he adds.

Learning strategy can differ for different people, but Shashank said that being specific is necessary to succeed. Aspirants should pick up a particular class of problems within a domain and apply data science techniques to solve problems. Randomly taking online courses and deploying ML models without production experience would not help.

How To Stay Relevant In The Data Science Landscape, Explains This Chief Data Scientist

This modus-operandi helped Shashank in mastering the domain and contributing to the open-source community on GitHub. He has contributed to Python libraries such as PyMC3 – a package for Bayesian statistical modeling – which is a part of NumFOCUS foundation that also develops NumPy. Besides, Shashank was an early contributor to the Apache Superset on which he has also written a book.

Shashank manages a team of data scientists and works towards achieving shared goals. However, he said that in data science, you would have challenges before even starting to solve a problem. For instance, stakeholders often want predictions, but if you are the first one to try that project, it is challenging to set up validation routines for predictions. Therefore, a data scientist needs to learn when to say “no.” Sometimes it is possible to address business challenges in a different problem formulation that still serves the original product requirements as well as can be validated. As a part of his job, Shashank also hires data scientists and mostly seeks for tinkerers who can develop algorithms from first principles in their unique creative ways. Reading and referencing literature has a vital role in the preparation, but often not in execution. The academic background of applicants is not the critical aspect for screening, but he pays attention to proficiency in programming.

Being very clear on the end goal and finding the motivation to solve a problem, as per Shashank, helps one thrive in the ever-changing data science landscape. Consequently, he said that aspirants should at first learn basics and then specialize in any one domain within the data science field. If a learner fails to do so, he or she will jump from one problem to another, thereby finding it challenging to learn and thrive in the domain. Shashank finally concluded by saying that data scientists need to be an expert in what they do, thus, being specific on their learning will help them succeed in their careers.

Has AI Failed Us During This Crisis?

The Hiring Process For Data Scientists At Concentrix