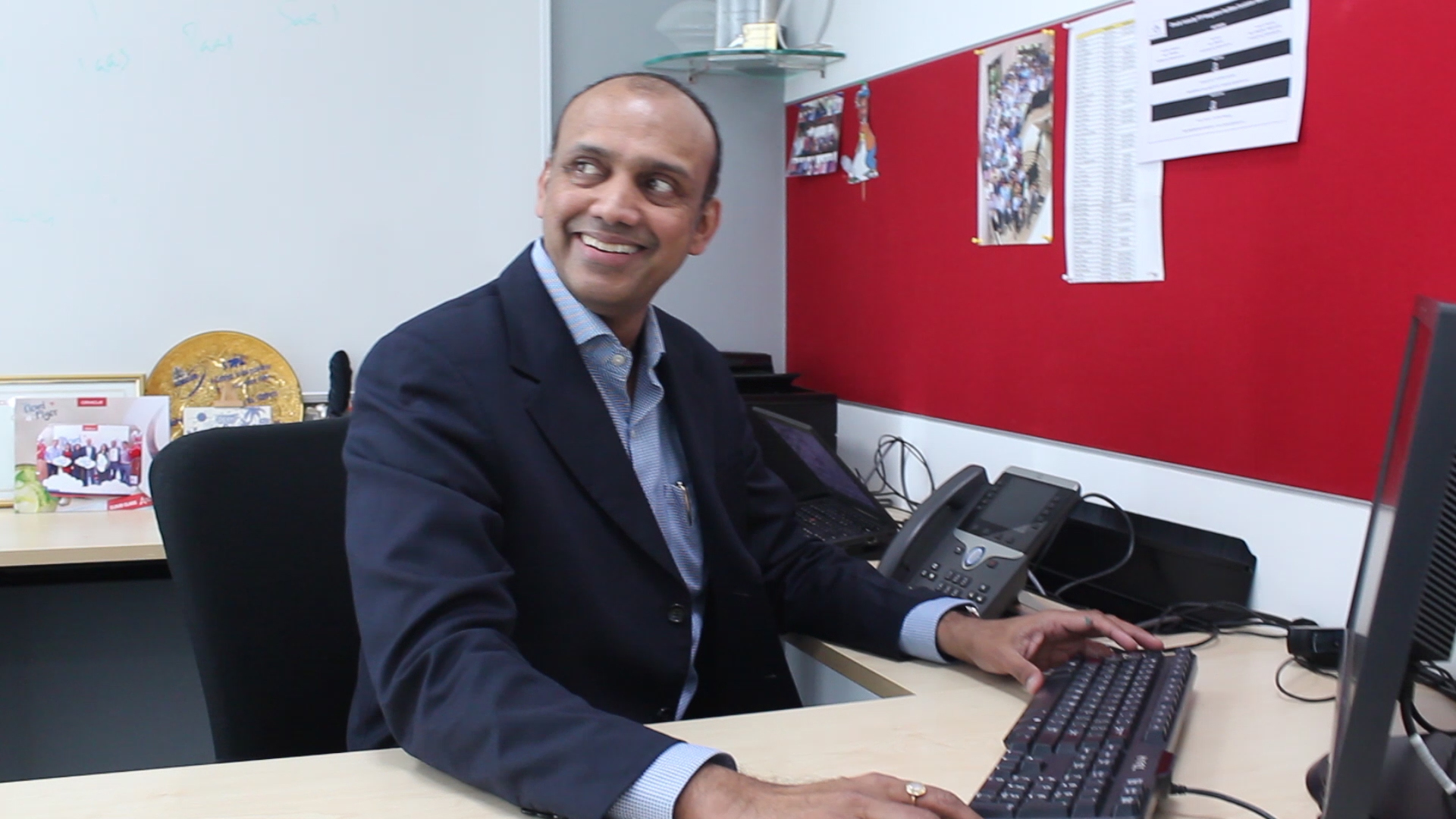 The clean, austere premises of the Oracle building in Bengaluru reminds one of a federal institution — picked out straight from a dystopian Hollywood film. But in this case, they have even stricter security checks — more so than most airports. When we joked about it with their CorpComm manager, he told us seriously that it was inevitable because Oracle deals with one of the most precious things in the world — data.

Data is becoming more and more essential to every form of transaction — online as well as offline, for individuals as well as businesses. That’s why it is not a far-fetched idea when the Indian Prime Minister Narendra Modi called it the new “wealth” at the recently-concluded World Economic Forum meet.

Analytics India Magazine took a look at the inner workings of Oracle, one of the fastest growing cloud companies in the world. We caught up with Subash Nambiar the vice president of Cloud Platform at Oracle India.

A famous perfectionist, Nambiar is used to working on things relentlessly until he gets them just right. We settled in his plush office, which proudly displayed his achievements and trophies, over a cup of hot Boost. A drink of his choice? Yes, he said. It reminded him of the “good old days”.

We began our conversation with Cloud Platform — a network of remote servers hosted on the Internet which are used to store, manage, and process data in place of local servers or personal computers.

Can you throw light on some of the major trends that are shaping the IT industry?

Emerging technology paradigms like AI, ML, Blockchain, IoT are redefining IT as we know it. Digital transformation is now recognised as a business imperative, and I believe cloud is the foundation for digital. Therefore, businesses have no choice but to move to the cloud sooner rather than later.

Cloud computing services in India is projected to grow at a CAGR of over 22 percent during 2015-2020. The spending on cloud services will touch $1.9 billion by 2019.

Please elaborate on the drivers of cloud in India, especially IaaS

With more and more Indian companies looking to transform into digital-first businesses, the move to cloud is becoming increasingly appealing. Indian companies are more bullish on cloud than some of their peers in other APAC markets. The explosive growth in Cloud in India indicates that enterprises are moving away from building their own on premises infrastructure, as well as migrating from the traditional software licensing model, to a SaaS model served up by cloud providers. Growing demand from increasing number of SMBs and the government’s efforts to digitalise the economy creates remarkable potential for the IaaS market in India as well as the entire APAC region.

Infrastructure as a Service (IaaS) is evolving as the fastest cloud offering and businesses are rapidly embracing cloud infrastructure to boost performance. Those resisting the move, need to start challenging the perceptions holding them back, because the longer they wait, the further ahead their competitors will pull.

What’s the best cloud model for an enterprise?

Despite research firm Forrester predicting that half of large enterprises will be running production workflows in the cloud by 2018, it is obvious that many companies still lack a clear, long term cloud strategy. Where should you start?

There’s no ‘one size – fits all’ approach to cloud. It depends on where an organisation is in their digital journey. In India, especially with large enterprises who have legacy IT infrastructure, we’re increasingly seeing a hybrid approach at play, with them moving workloads in a phased manner.

What according to you are the key factors to consider when a company is contemplating cloud?

I think it’s important for every enterprise to have a clear objective and roadmap for cloud. Because, the transition to the cloud is a journey in itself. It’s important to clearly define the objectives and outcomes that an organisation wants to achieve from its cloud journey.  A simple four step approach can work wonders.

There are significant changes and improvements to be made during the journey, and that’s where it differs from any other kind of transformation a company undertakes.

How can cloud platforms such as PaaS and IaaS enable digital transformation in India?

Birlasoft, a leading information technology services company, was able to transition quickly to a modern, highly available and flexible cloud infrastructure. With Oracle’s IaaS offering, Birlasoft was able to free up significant time and capital, innovate more and accelerate the growth of its core business.

NCDEX e Markets Limited, the leading National Spot Exchange in India wanted to migrate from an on-premises IT environment to a modern, scalable cloud infrastructure and chose Oracle. The migration with NCDEX was highly easier than imagined, while delivering the same top-notch customer experience as before.

Coming to PaaS, choosing the right cloud platform is a prerequisite for cloud success. The best PaaS systems, for instance, enable integration between the various cloud services (such as SaaS and IaaS solutions). This allows businesses to virtualise processes, such as web application development, while still having access to the same standards and tools they are used to from their on-premises environments. Modern PaaS offerings also enable businesses to shift workloads between the public and private cloud, as well as on-premises, and hybrid environments, allowing them to easily migrate on-premises applications to the cloud and back as needed.

But PaaS has a far greater role to play in enabling the holistic cloud than just acting as a bridge between the cloud and on-premises worlds; it’s also an important means of ensuring cloud services deliver all they’re capable of. For example, an organisation might find that their off-the-shelf SaaS application doesn’t fully meet the business requirements; at least not in the way an ‘old-world’ and (most-likely) highly-customised enterprise application did. In fact, it is often these customisations that are attributed to delivering competitive differentiation.

Amego is India’s first logistical assistance company for medical emergency on the go. The company wanted to implement a scalable, flexible cloud platform that can be accessed from anywhere across the country. With Oracle Mobile Cloud Service, Amego successfully enabled more than 50,000 people with one click access to automatically log medical emergency requests and get approvals on the go. Customers can avail Amego’s services whether online or offline, even from far-flung pharmacies and hospitals with no internet connectivity.

Our recent research insights reveal that the proportion of Indian businesses reaping the rewards of embracing cloud infrastructure services has increased significantly in the last quarter. The research also found that 78 percent of businesses believe IaaS delivers exceptional operational performance in terms of speed and availability, a 19 percent quarter-over-quarter increase.

Key insights from the report:

Oracle is now the world’s fastest growing cloud company, at scale, and the only company that can offer a complete portfolio across all three layers of the cloud: SaaS, PaaS and IaaS. In addition to that, we have now introduced the a new service, called data-as-a-service (DaaS). We are witnessing near 100 percent growth in cloud business in India, across industry sectors, including in emerging cities in interior India.

What is Oracle’s value proposition specific to IaaS? What’s your plan to beat the competition?

Oracle offers a comprehensive set of infrastructure services — such as elastic compute, storage, networking, bare metal, migration tools, and container to help you quickly increase business value and performance. Oracle Cloud’s IaaS lets businesses run any workload in the cloud. Best of all, it does so in a fully integrated environment that has been optimised for the cloud and provides a unified security model. And with the addition of Oracle Bare Metal Cloud Services, Oracle provides an enterprise cloud platform that operates exactly as customers want it to.

Oracle’s Gen2 cloud platform approach to infrastructure design and deployment is specifically designed to host mission-critical applications, whether they are three-tier or cloud-native, scale up or scale out, with no re-architecture required. What differentiates Oracle’s IaaS cloud from others is its enterprise orientation, integration across the three layers of cloud and across private, public and cloud at customer.

Are you seeing momentum for IaaS with mid-sized customers?

The beauty of Cloud is that it’s a great equaliser. Mid-sized companies and start-ups can change growth orbits using the same modern, enterprise-grade Oracle cloud infrastructure solutions that a large company uses. We’re witnessing an increase in the demand for cloud infrastructure from SMBs. Our strategy to launch the Oracle Digital Hub in India (the first such Oracle Digital Hub in APAC) was to empower Indian SMBs to dream big and focus on innovation, without having to worry about managing IT infrastructure.

What kind of benefits are your customers seeing?

IaaS is an essential part of any progressive cloud IT strategy, with around half believing in the world-class availability, uptime, and speed it delivers. Outstanding performance isn’t the only benefit IaaS brings. Organisations are saying IaaS helps them respond quickly to change and significantly cuts the time it takes them to deploy new products and services.

Which are some of the industries where IaaS solutions are witnessing most adoption?

We’re seeing increased demand from businesses across IT/ITES, Telecom, BFSI, Healthcare, Retail, E-commerce, Government among others. While we’re witnessing more non-core workloads being migrated to the public cloud (such as test and develpment), it’s only a matter of time before companies seriously consider moving production workloads to the public cloud.

What will be the deep focus areas for Oracle in India for 2018?

Cloud is our main focus. We’ll continue to help customers make sense of emerging technologies such as AI/ML, Blockchain, IoT in transforming their businesses.

The key three things customers should look out for in 2018

Indeed. Data is the new engine driving the digital economy forward. Enterprises – both public as well as private – need to ensure they safeguard data and put it to the best possible use for unlocking new competitive advantages.

Role of Analytics in IaaS, PaaS and SaaS

With data the new ‘wealth’, analytics becomes all the more important. Organisations that can unlock meaningful insights, quickly, can surge ahead.

More companies understand the true value of analytics now than ever before. Also, many solutions are now embedded with AI elements for super-fast analytics.

Are 5G and AI Linked? Can India Vault To Pole Position In AI Race With 5G Rollout?