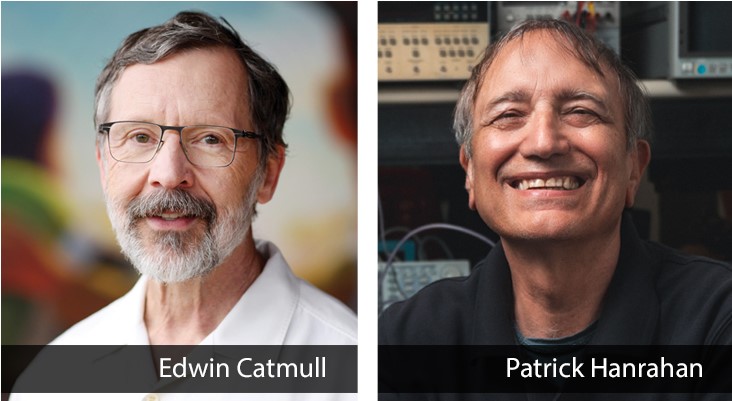 ACM, the Association for Computing Machinery, today named Patrick M. (Pat) Hanrahan and Edwin E. (Ed) Catmull recipients of the 2019 ACM A.M. Turing Award for fundamental contributions to 3-D computer graphics, and the revolutionary impact of these techniques on computer-generated imagery (CGI) in filmmaking and other applications. Catmull is a computer scientist and former president of Pixar and Disney Animation Studios. Hanrahan, a founding employee at Pixar, is a professor in the Computer Graphics Laboratory at Stanford University.

Ed Catmull and Pat Hanrahan have fundamentally influenced the field of computer graphics through conceptual innovation and contributions to both software and hardware. Their work has had a revolutionary impact on filmmaking, leading to a new genre of entirely computer-animated feature films beginning 25 years ago with Toy Story and continuing to the present day.

The ACM A.M. Turing Award often referred to as the “Nobel Prize of Computing,” carries a $1 million prize, with financial support provided by Google, Inc. It is named for Alan M. Turing, the British mathematician who articulated the mathematical foundation and limits of computing. Hanrahan and Catmull will formally receive the 2019 ACM A.M. Turing Award at ACM’s annual awards banquet on Saturday, June 20, 2020, in San Francisco, California.

“CGI has transformed the way films are made and experienced, while also profoundly impacting the broader entertainment industry,” said ACM President Cherri M. Pancake. “We are especially excited to recognise Pat Hanrahan and Ed Catmull, because computer graphics is one of the largest and most dynamic communities within ACM, as evidenced by the annual ACM SIGGRAPH conference. At the same time, Catmull and Hanrahan’s contributions demonstrate that advances in one specialisation of computing can have a significant influence on other areas of the field. For example, Hanrahan’s work with shading languages for GPUs has led to their use as general-purpose computing engines for a wide range of areas, including my own specialisation of high-performance computing.”

“Because 3-D computer graphic imagery is now so pervasive, we often forget what the field was like just a short time ago when a video game-like Pong, which consisted of a white dot bouncing between two vertical white lines, was the leading-edge technology,” said Jeff Dean, Google Senior Fellow and SVP, Google AI. “The technology keeps moving forward, yet what Hanrahan and Catmull developed decades ago remains a standard practice in the field today—that’s quite impressive. It’s important to recognise scientific contributions in CGI technology and educate the public about a discipline that will impact many areas in the coming years—virtual and augmented reality, data visualisation, education, medical imaging, and more.”

7 Programming Languages That Will Die In A Few Years

How To Learn A Programming Language As Fast As Possible