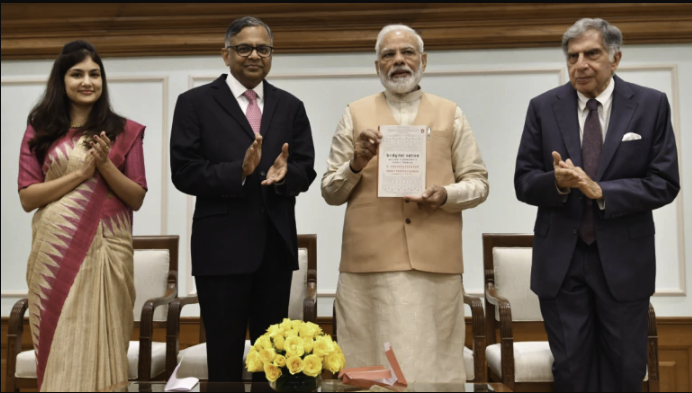 During a recent book launch, Indian Prime Minister Narendra Modi showed his thought leadership on artificial intelligence which many are hailing as a positive sign for the country’s future. The book titled Bridgital Nation (Penguin Allen Lane, ₹583), co-authored by N Chandrasekaran, chairman of Tata Sons and Roopa Purushothaman, the Chief Economist at Tata Sons; talks about how the gap between supply and demand can be bridged through advanced technologies.

Speaking in this context, PM Modi said that technology is the most important tool for inclusive growth in the country. Calling it a visionary document, PM Modi presented it to Ratan Tata.

At the event, the Prime Minister said there is no need to panic about technology as it is a bridge, not a divider of people. According to him, there are efforts to demonise the technology and create fears around it. Rather than looking at it as an issue for the demographic dividend, artificial intelligence can help the population in terms of poverty alleviation and inclusive growth.

He also iterated that if the human intention is good, artificial intelligence will be a great enabler of prosperity for the country. He also asked Indians not to worry about the dangers of AI outsmarting humans.

While India has been lagging behind other developed nations like the US and China in artificial intelligence research and implementation, the recent efforts from the government are in the right direction. The government has allocated a substantial budget for AI research, as well as given impetus to startups in the space.

PM Modi told during the event how using data intelligence from satellites; the government was able to track the location of LPG distribution centres, and thereby plan new 10,000 centres for efficient distribution. There have been multiple AI-led initiatives in the country like the recent digital mapping of the country.

The government has been removing silos between government departments and establishing e-marketplace in the country so that technology can be adopted across all departments. Modi cited how India’s postal system has transformed in the last decade, going all the way from basic letter distribution and saving account services to a modern-day banking and informatics lifeline for the country.

What Are The So-Called ‘Fears’?

The fear about artificial intelligence is that it will impact almost all sectors wherever processes could be made more efficient. For example, the retail industry where the self-checkout systems along with help from robots, chatbots, user-friendly applications and seamless digital payments can put human workers out of work. The threats of artificial intelligence to job losses is heightened by economic contractions as the one currently going on in India.

Layoffs due to rising adoption of artificial intelligence may come as a bad sign for employment opportunities for the untrained workforce, particularly those not trained in technical or specialised skills. However, this does not necessarily mean unemployment, instead of a shift in newer types of jobs. Research by EY and Nasscom says that by 2022, about 46% of the workforce will be involved in entirely new jobs that do not exist currently or will be deployed in situations that have radically changed skill sets.

Whenever there is new technology advancement, there have been fears among the population of job displacement. According to experts, the situation is almost the same this time as well. The impact of artificial intelligence and automation is upon us, and while it may replace current jobs, it will create many newer ones. The focus, therefore, has to be on skill development and on creating intelligent education systems.

How To Delegate Tasks In A Data Science Team

Future Of Machine Learning On Smartphones