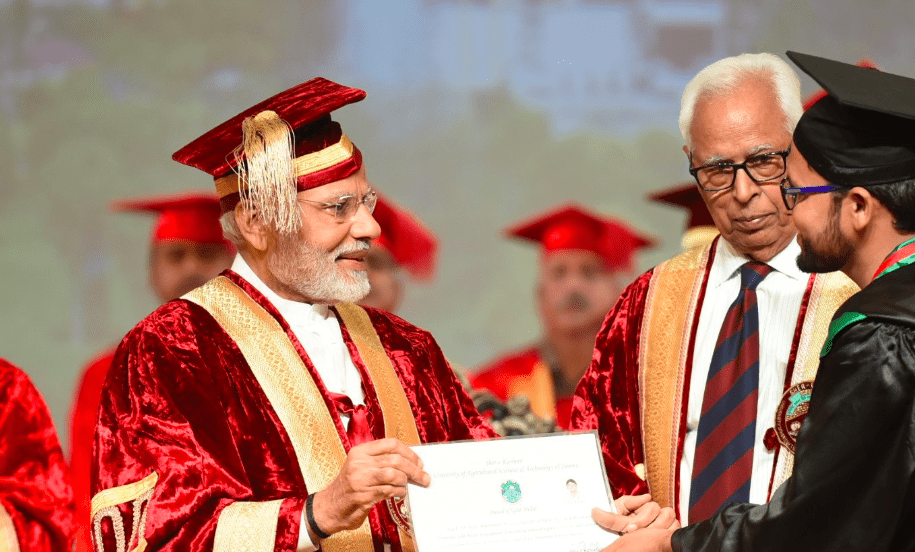 Reiterating his as well as his government’s stance on new technologies, Indian Prime Minister Narendra Modi emphasised the use of artificial intelligence in sectors like agriculture.

Speaking at the convocation ceremony at the Sher-e-Kashmir University of Agriculture Sciences and Technology in Jammu, PM Modi said that the future of agriculture lay in AI and blockchain technology.

Embracing AI and Block Chain Technology would be beneficial for our agriculture sector. pic.twitter.com/hUVeGIscin

According to reports, he said, “The changes that blockchain technology and AI will bring about in agriculture will be revolutionary. As of now, farmers in a few parts of the country are already using this technology in their practices.” He also added that the the BJP-led government has done a lot of work to ensure that “agriculture touched new heights”. He also added that using AI and blockchain technologies would also help in reducing crop destruction.

Need of the hour is to invigorate our agriculture sector with latest technology. Through technology, we can improve irrigation systems and save water. pic.twitter.com/oe1NdSH4iR

In one of his monthly addresses called Mann Ki Baat, PM Modi had earlier spoken about using AI for the good of divyangs (specially abled persons), underprivileged citizens and farmers. He and his government have been promoting the use of technology for “sabka vikaas” (everyone’s betterment) quite enthusiastically for quite some time now.

He has also directed the NITI Aayog to acquaint all the ministries with high-end technologies. “China is way ahead of India in a lot of areas but the government does not want to miss the bus this time when it comes to research and adoption of this technology… NITI Aayog has been asked to undertake all possible pilots happening elsewhere in the world, if it addresses India’s problems, so government departments and states are willing to use AI in their day-to-day functioning,” a source claimed.

In fact, PM Modi had also downplayed the fears of citizens losing jobs to robots and automation. Speaking at the inauguration of the Wadhwani Institute for Artificial Intelligence on the Kalina campus at University of Mumbai, he had affirmed that AI would increase the citizens’ productivity, and not take away their employment.

The Modi government has also set up the AI Task Force to prepare India for the upcoming Industrial Revolution 4.0 and the resulting economic transformation, with an emphasis on AI.

Should One Manually Code Algorithms When ML Libraries Exist

India Should Focus On Building Data Infrastructure First, Before Charging Into AI Race