“We need a harmonious balance between the protection of the fundamental rights of citizens on one hand and the surveillance needs of India on the other,” says Neha Bhargava 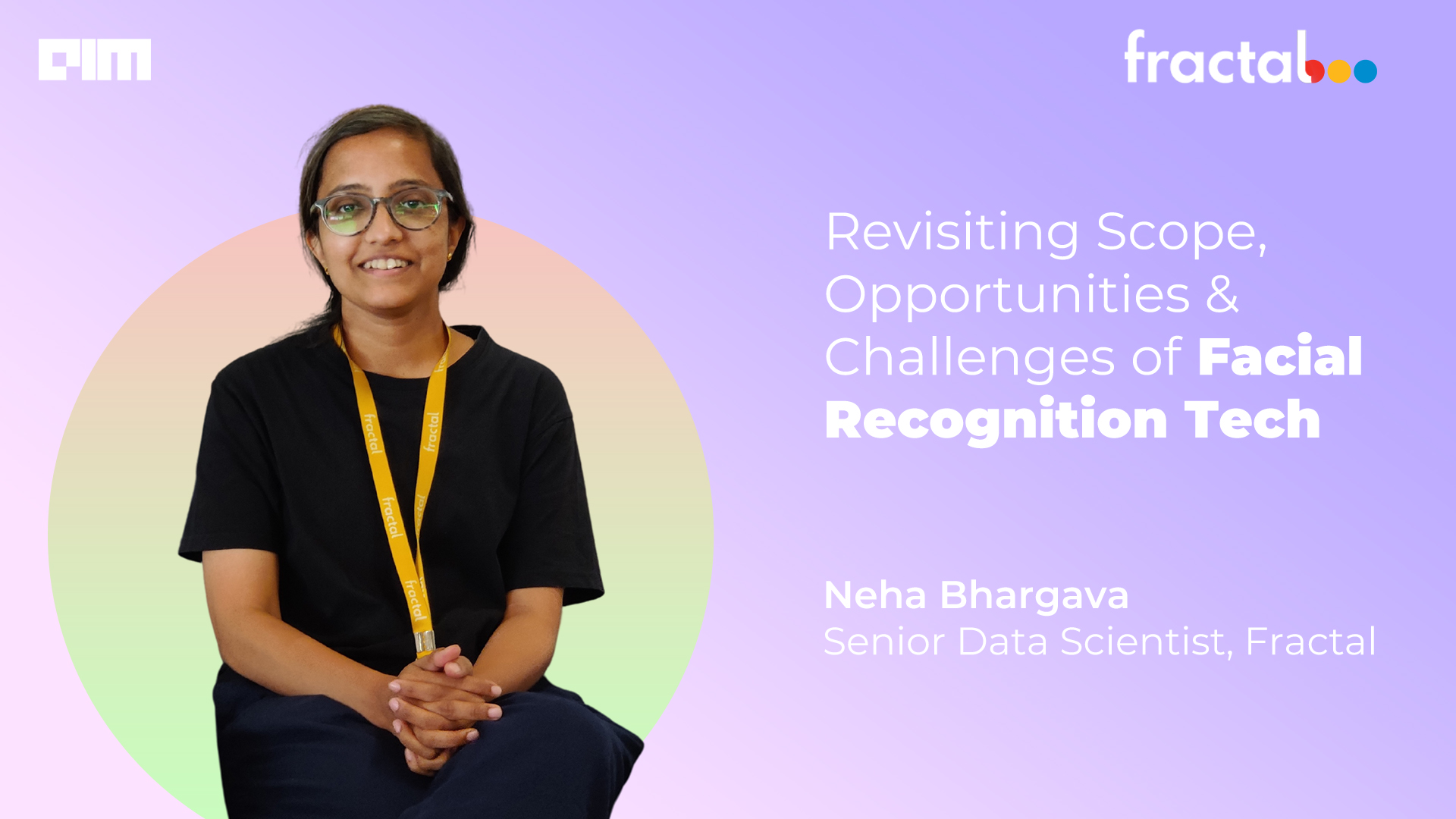 Facial recognition is one technology that evokes equal amounts of curiosity, excitement, and suspicion. The possibility of extracting even the tiniest bit of information just by analysing one’s face is surely fascinating. Over the years, as the world digitalises rapidly, facial recognition technology has also witnessed massive progress.

Analytics India Magazine caught up with Neha Bhargava, a senior data scientist with Fractal, to understand more about the field—the opportunities it brings, the drawbacks, and the prospects.

AIM: What is the latest in the field of facial recognition technology? What scope does the immediate future hold for this technology?

On the analytics side, multiple techniques are emerging on top of face recognition, for example—emotion/expression detection, skin texture analysis, temperature detection, and face recognition with augmented and virtual reality. Also, in recent years, we have seen a boom in deep learning architectures and computational capabilities. One very promising direction is cloud-based solutions coupled with big data, network connectivity, and security—all these will play major roles in making face recognition technology grow substantially in commercial space.

The rapid advancement in this field has also widened the scope of its applications. This was especially evident during the pandemic era. Some of the most significant applications of facial recognition in this context were—emerging as an alternative to fingerprint scanning, body temperature scanning through thermal imaging, and contact tracing to contain the spread of the virus.

Of late, government agencies all over the world have been offering a major push to the increased usage of this technology. The primary use of this technology has been in their surveillance systems for public space monitoring and crime prevention. In addition, various fraud detection applications are also using this technology for two-factor authentication.

AIM: What are the major challenges with facial recognition systems today?

Neha Bhargava: The main shortcomings are those concerning reliability, safety, and performance. It is not very difficult to fool the system; hence, more often than not, facial recognition is used as a secondary system. Facial recognition systems are yet to become as reliable as fingerprints, iris recognition, and retina scan in terms of accuracy. Further, the design of such systems could be improved so as to not appear too intrusive, giving the users the confidence to use them.

Then, there are ethical and regulations-related challenges. On the ethical side of AI there are some concerns about how deep learning models for face recognition are trained. It has been proved on various occasions that these models are biased and do not work well on women’s and black people’s images. Also, facial recognition systems—like many AI systems—have the black box problem; since it is not very apparent how these systems work, there can be a few apprehensions related to their use. Governments, companies and other stakeholders are trying to bring a few regulations to combat such concerns around privacy and data security.

AIM: Does India have any regulations related to facial recognition? Are they enough?

Neha Bhargava: Unfortunately, India has no laws when it comes to face recognition, including data collection, processing, and storage of facial data. But such technologies can invoke multiple laws/rights related to privacy, constitutional, and IT. For example, data privacy is one of the main concerns around this kind of technology—especially when the data falls under the category of sensitive personal data. The Supreme Court of India has already declared the right to privacy as a fundamental right. The Indian IT Act, a kind of mother legislation on the electronic format, also does not say anything about facial recognition.

This lack of proper regulation is ironic given that central and state government agencies (e.g. Police, NCRB, Railways, etc.) are very keen on using this technology for different purposes. But on multiple occasions, they had to back off from using it because of resistance. This resistance will not stop until we have detailed legal frameworks for using such technologies.

But on a more hopeful side, the government of India very recently mentioned that the new draft of the data protection bill is under work, and it is expected that it will enable efficient data usage with protection while being used by the industry. So, it seems like the government is also motivated to keep pace with emerging technologies.

AIM: There is always a fear of surveillance associated with this technology. What do you have to say about it?

Neha Bhargava: Yes, there is fear of surveillance associated with face recognition technology, and honestly, it is not baseless. We have seen real-life examples of its misuse that can infuse distrust. I think this fear can be reduced drastically by bringing more transparency on its usage, with data protection laws in place, and by bringing more awareness among the stakeholders—government agencies, private companies, and the common man. We need a harmonious balance between protecting the fundamental rights of citizens on the one hand and the surveillance needs of India on the other. I am very hopeful that we will find that balance soon.