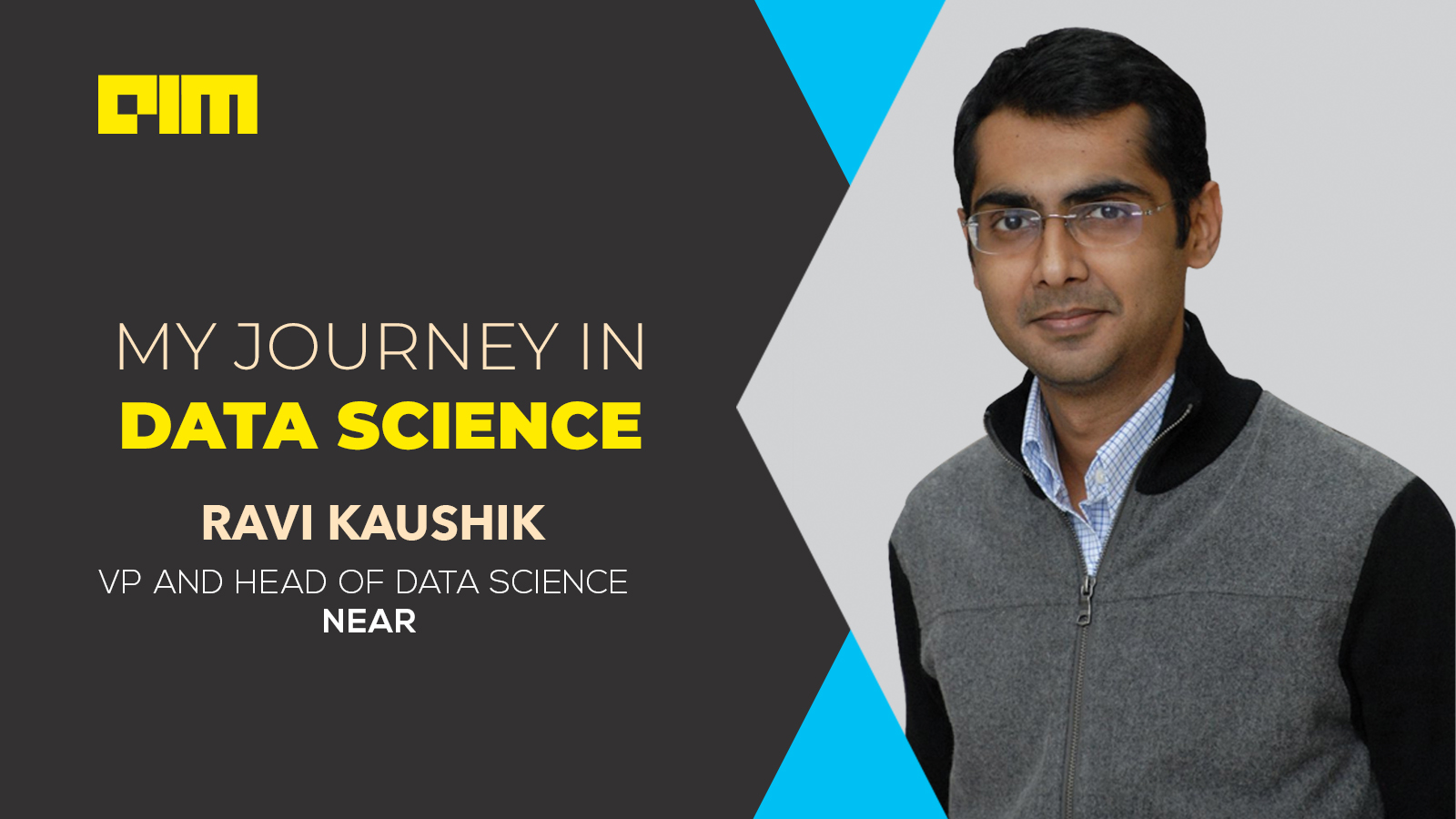 Is Machine Learning Model Management The Next Big Thing In 2020?

Analytics India got in touch with Ravi Kaushik, VP and Head of Data Science at Near, for our weekly column My Journey In Data Science. He has over seven-plus years of professional work experience in the data science domain. Ravi shared how he fell in love with data science and what practices he adopted to succeed in the competitive field.

Ravi completed his instrumentation engineering in 2003 from MS Ramaiah Institute of Technology and then started his masters in 2004 at The City College of New York in Electrical Engineering. “Passionate about automation, I was working on various robotics projects. And eventually got the research funding to continue the research at City University of New York Graduate Center in PhD,” says Ravi. However, my PhD was in computer science. While dealing with robotics, one needs a wide range of expertise — computer science, electrical, and mechanical engineering. My PhD in computer science further enabled me to build and research in the robotics landscape,” he added.

Ravi’s journey in analytics started when he was exposed to data structures, theoretical computer science, and machine learning in his first semester of PhD. Then he took advanced machine learning subjects in the following year. He used Matlab and C++ for his research, Java for visualisation, and C for embedded systems. Python was not popular back then, and he only started with it in the latter part of his PhD.

During his PhD, Ravi learned about neural networks and advanced machine learning, however, he was influenced by Yann LeCun, who once demonstrated an object detection model at the university. Ravi did not know that data science would proliferate, but he was interested in it due to its use case in robotics and automation. “I headed in the direction of automation and ended up being a data scientist,” said Ravi.

Even after having a PhD, Ravi struggled to land his first data science job since it was just after the 2008 recession. He failed in more than 50 interviews but never gave up. Eventually, Ravi got a job in American Express just before his student visa was about to end. There he worked on numerous projects, but while talking about one of his best projects, Ravi believes that his contribution to fraud detection in credits was something he cherished as the project was ahead of its time.

Besides, Ravi leveraged big data tools and analysed a colossal amount of information at American Express. While working there, he kept enhancing his skills by reading books, research papers and learning from colleagues. Even today, Ravi thinks aspirants should keep a popular book — The Elements of Statistical Learning and Deep Learning by Ian Goodfellow — in handy for mastering techniques. Blogs help in obtaining an overall idea, but books can give you an in-depth understanding of techniques.

More Data Science Courses Made Free Due To Covid-19

After more than five and half years at American Express, Ravi joined one of his colleagues from American Express for a startup, Corridor Platforms, as he wanted to come back to India. However, Ravi later joined Near after almost one and a half years at the startup. Today, as a VP and Head of Data Science, Ravi manages teams of data scientists. He built the data science team at Near from the ground up by hiring proficient data scientists who could culturally fit for achieving shared goals.

“No matter how brilliant you are or how much you have read, it becomes useless if one does not have the right attitude. It is completely fine to make mistakes, but one has to be humble enough to keep trying and succeeding,” says Ravi. For one, the firm hired a brilliant aspirant from Stanford, but he failed to deliver due to lack of right attitude. Apart from attitude, he looks at applicants academic achievements and tries to assess them on their understanding of the basics in data science.

For aspirants, Ravi said that getting the foundation right before building a layer of machine learning techniques is vital to succeeding in data science. However, aspirants should go one full stretch and then visit again to go in-depth in any one of the specialisations in the data science domain. Along with going deep dive into some speciality, having a complete idea of the entire data science field is also essential. Besides, having a good portfolio of projects is equally necessary for showcasing your expertise in the data science landscape.

Is Machine Learning Model Management The Next Big Thing In 2020?

Are We Seeing The Data Science Bubble Burst?

How To Start A New Data Science Job Remotely

How To Build An Online Course On Data Science