Rome Call For AI Ethics: A Humanising Pledge Signed By The Tech Giants & The Catholic Church 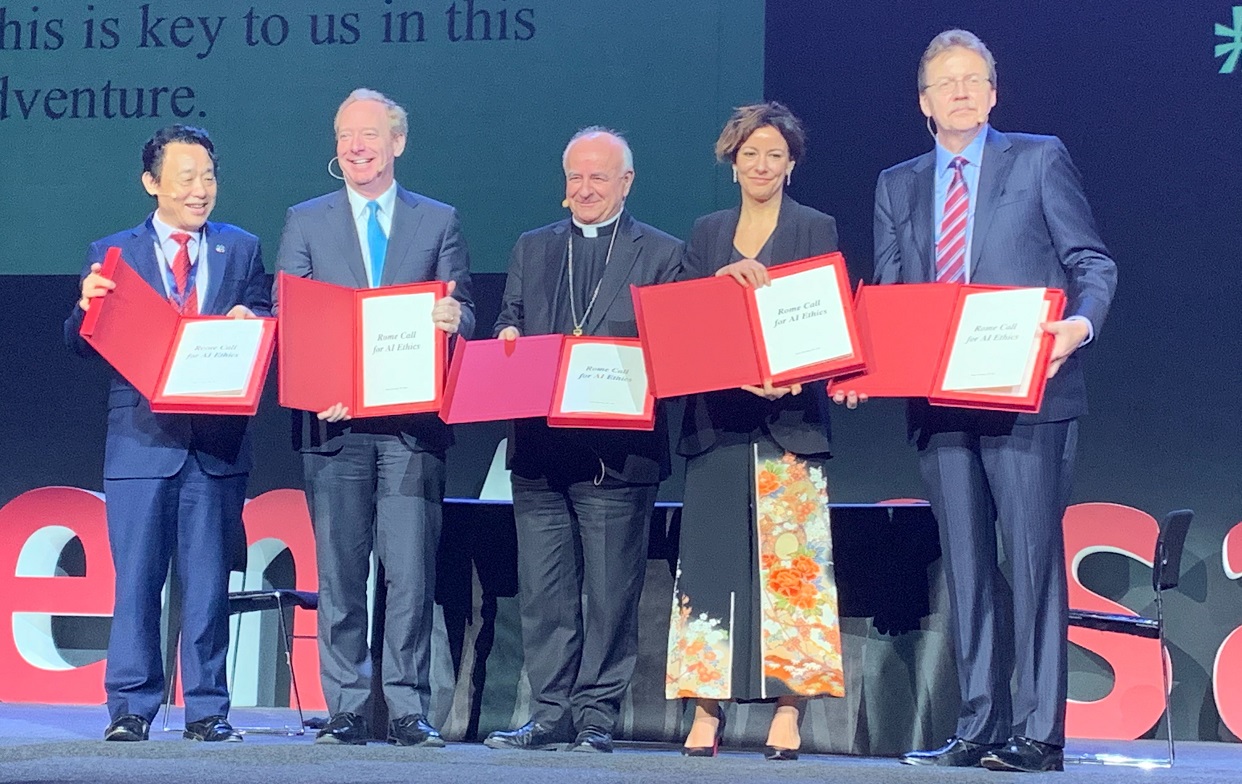 Artificial intelligence (AI) has been seen as a transformative tech, where AI is now used to do significant functionalities of our lives. AI has enabled companies and governments to keep a constant tab on what humans are doing, therefore several questions have been raised, by critics, about its privacy and ethics. To promote ethical use of artificial intelligence (AI), for protecting the planet and the rights of the people, Vatican officials have signed a pledge with tech giants Microsoft Corp and IBM.

The pledge — “Rome Call for AI Ethics” is called to ensure that the technology of artificial intelligence is respecting privacy, and is working without bias — has been presented to Pope Francis, on Friday, by the president of Microsoft — Brad Smith, and executive vice president of IBM — John Kelly along with Vatican officials and the Chinese director-general of the UN Food and Agriculture Organisations — Qu Dongyu.

The deal focuses on increasing awareness among companies and institutions to set a barricade and a guideline to use ever-changing technology. It involves AI to safeguard the rights of the people concerning biases related to fields of facial recognition used to investigate crime, and AI applied to vet job applicants — both been proved to be inaccurate and a biased software. That is the reason, according to the news report, the pledge has been taken to “humanise technology and not ‘technologise’ humanity.”

This Vatican initiative grew out of concerns that Pope Francis mentioned last year. Speaking at a Vatican tech conference, he mentioned that technology needs both — “theoretical as well as moral principles”. The Pope said that the remarkable developments in the field of artificial intelligence, have significant implications in all of the human activity, and unethical use of such a technology might lead to “unfortunate regression to a form of barbarism.” The Pope has always been wary of the misuses of AI and its effects on real political and social tensions. For this reason, they decided to sign the “Call for Ethics” with Microsoft and IBM as the first two technology industry sponsors.

According to Smith, the technology of artificial intelligence should be guided by strong ethics built of global human rights traditions. Agreeing to that, Francesca Rossi, IBM’s global AI ethics leader, said, “The Vatican is not an expert on technology but has its hold on moral values. This technology collaboration will make the whole society of the Vatican understand the correct ethical use of this technology.” The workshop will be led by the Pontifical Academy for Life in the Vatican this week, and it is aimed to call governments, NGOs, industry leaders and other associations to join the pledge.

“Rome Call For Ethics” is considered to be a positive move by IBM and Microsoft to make ethical AI; however, critics have been unclear about its prospects on a longer run. Last year, similar to this, Facebook started its initiative by teaming up with the Technical University of Munich to form an independent AI ethics research centre; along with tech giant Google, who created an Advanced Technology External Advisory Council to guide “responsible development and use of AI.” The European Union has also recently released its guidelines for promoting ethical AI, alongside Canada and France who are tackling the issue by creating platforms to discuss responsible adoption of AI.

This paper by Vatican City got released shortly after the EU published their version of guidelines to regulate AI. The EU guidelines included requirements like technical robustness, safety, privacy, data governance, and accountability. However, several critics termed the released guidelines weak in comparison to the version of the white paper published in January 2019.

Differently, Vatican officials had concerns about AI displacing humans from their jobs and its availability to everyone. The speakers at the event said the invention of artificial intelligence would be as significant to human development as the invention of the printing press or combustion engine — putting humans at the centre of new technologies.

According to the document, AI systems must be designed to serve and protect human beings and the environment in which they live. Further, it reads “This fundamental outlook must translate into a commitment of creating a social living condition that allows both groups and individual members to strive to express themselves where possible.”

Alongside, these principles affiliates for AI to be “explainable” to humans. In other words, for humans to use AI, it is imperative to understand how artificially intelligent solutions make decisions. And, these guidelines termed “explainability” as one of the critical criteria to hold artificial-intelligence-based systems accountable.

“New forms of regulation must be encouraged to promote transparency and compliance with ethical principles, especially for advanced technologies that have a higher risk of impacting human rights, such as facial recognition,” read the document.

The Vatican pledge also emphasises the concern of artificial intelligence being discriminatory, which depends on its built and training, end up mimicking the societal bias.

The Vatican’s interest in technology is hardly new, as several of its institutes and pontifical academies are already researching technologies like AI and robotics, and its use in humanity at large. However, with the gaining prominence of the ethical use of technology, the pledge is a sign of weighing in on the revolution by working alongside the tech companies. Vatican officials hope to increase the number of signatories for its AI ethics initiative in the coming months. Parallelly, also hope to collaborate with universities across the globe to promote more scientific research into ethical AI guidelines.

At the event, IBM’s Kelly also said every job in the world would soon be touched by artificial intelligence in the immediate future. He said the best scenario would be humans not being replaced by machines, but working alongside them.

The future will hold a world where man and machine are working together synergistically, so the pledge is going to open up broader opportunities in sectors like health care, food supply chains, safety and security, or energy discovery and exploration, said Kelly.