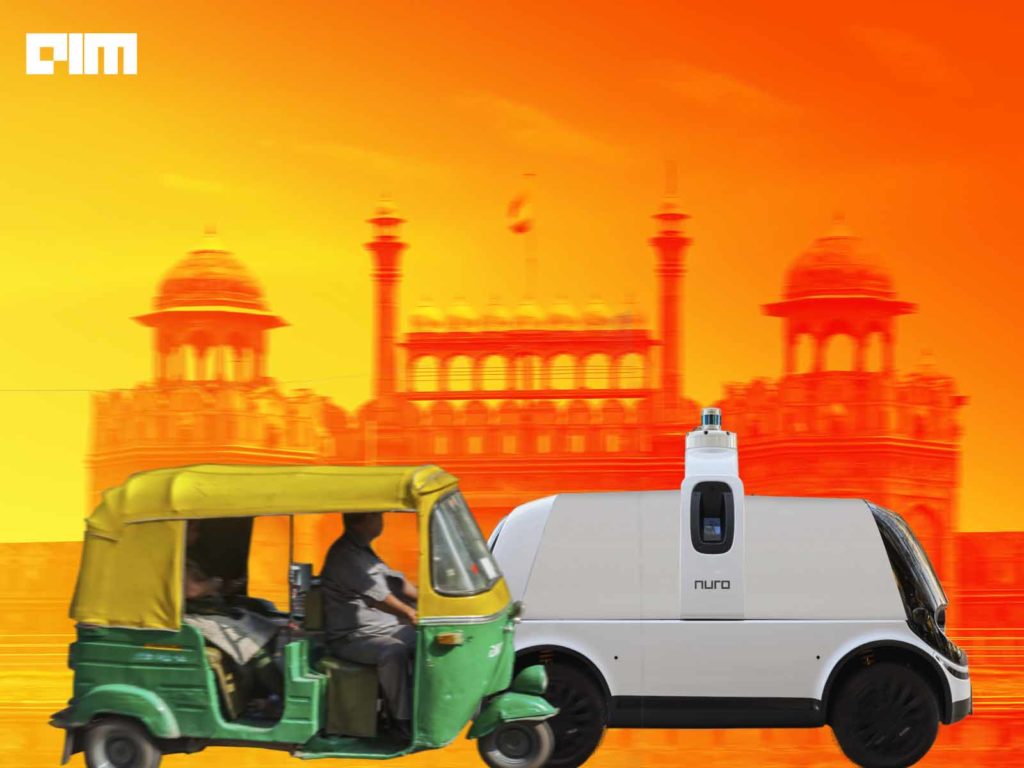 India has a serious mobility problem. Busy roads, packed parking lots, signal jumping, potholes, poor lane discipline, and so on. Not that these are exclusive to India, but few problems have been persistent over the decades. Electric vehicles were supposed to bring much-needed respite to the traffic woes in many ways. But, where are the promised sleek electric cars? Why don’t we see the roads swarmed with Teslas yet? Who is actually working on self-driving technology in India? These are a few of the many questions that concern us as we hear news of electric vehicles, autonomous cars, robotaxis, etc.

For instance, this week, the California Department of Motor Vehicles issued the state’s first autonomous vehicle deployment permit to a four-year-old startup Nuro. This will allow the company to run its robotaxis for food and other delivery services. There is no doubt that the robotic food delivery platforms are nowhere near level 5 fully autonomous cabs, but robotaxis for delivery is a big step forward. So, is India ready for robotaxis at least? In this article, we shall try to address such pressing questions and see what is in store for Indian self-driving dreams going forward.

What Did Nuro Get Right

Nuro first launched their self-driving delivery service in 2018, with a goal to accelerate the benefits of robotics for everyday life.

Let’s take a look at the rationale behind Nuro’s push for autonomous vehicle delivery systems:

Nuro’s initial focus was explicitly on autonomous vehicles that deliver goods, not people. This distinction allows the company to deploy its technology in a real service faster than many other companies. According to the Bureau of Transportation Statistics, Americans make roughly 1.1 billion car trips per day, of which nearly 45% are taken for running errands. This is the market that Nuro wants to capitalise on. They want their customers to put the least effort into their daily mundane tasks. Accordingly, Nuro struck a deal with Kroger to deliver groceries for the largest grocery chain in the world. “We are building today’s impossible technology so that future generations consider autonomous robots just another part of daily life,” says the company.

Self-driving delivery is believed to have the potential to make fast, affordable home delivery widely available for essential goods like groceries or medicine that are rarely delivered today.

According to a 2018 report by India’s think tank, NITI Aayog, the transportation sector in the country accounts for 18% of commercial energy consumption and is highly dependent on oil imports. India imported 80% of its oil at the cost of ₹4.2 lakh crore in 2015. Additionally, private vehicle use has significant implications on land requirements for parking.

Improving incomes of the households, working partners, and hectic schedules have enabled the working class to resort to easier alternatives — online delivery platforms. Fueled by the pandemic, major cities in the country have already witnessed an unprecedented rise in the demand for the likes of Zomato, Dunzo, and many other variants. Though the delivery giants are in touch with the tech-innovation and are capable of it on all frontiers, will they entertain to replace their workforce with robotaxis for the Indian users?

How Long Before India Gets One?

According to reports, the following major forces are competing for the Robotaxi market:

Although there are over 300 startups globally, most of the companies are working on DMS and ADAS (advanced driver assistance system). This is only one tiny problem of the autonomous driving problem.

There are actually three bigger problems to solve — perception, planning, and localisation. If one tries to solve the problem very accurately, which is what most companies are doing, the challenge would be to minimise the computation time. So, it’s not just a coding problem that can be solved by hiring the best coders in the world, but it requires fundamental mathematical research to come up with some mathematical formulation that can allow one to actually capture more semantic or perceptual information from limited computations.

For example, one of the deep learning frameworks recently developed by Tesla requires 500+ Gflops, and even for 10 fps input, one would need the best GPU onboard. The current state of deep learning basically, is about how we can achieve accuracy without worrying about the computations.

“Wherever fundamental research is required, the costs multiply.”

Any breakthrough in the case of self-driving technology requires research from the ground up. The usual assembly of algorithms just won’t help in this scenario. When it comes to fundamental research in fields such as Robotics, India is at least a couple of decades behind its contemporaries. If one finds that exaggerated then they should make a list of companies that are “genuinely” pushing the envelope of reinforcement learning and other research domains. And, wherever fundamental research is required, adds Sanjeev, one needs a huge amount of investment to hire the best talent in the world.

The ugly truth is that self-driving technology is a tough nut to crack. We are at least five years away from even witnessing level 3 autonomy on roads. India has one of the toughest roads in the world. The models that work well in relatively empty roads of the United States will falter in Bengaluru or Delhi crowded roads. So, this is not just a problem exclusive to India. The world is yet to figure out self-driving tech.

“Robotaxi for delivery will cost a fortune, especially when compared to what a team of delivery agents would charge.”

This is the reason many companies are venturing into delivery services to keep the ball rolling. Companies like Zoox, Nuro, Waymo have lofty goals of making driverless ride-hailing services a reality, but food delivery is what they would like to experiment with in the near future. That brings us to the next question — Can we at least have autonomous food or retail delivery pods in India?

Online delivery in India has been around for a while, but the pandemic made it mainstream. So, anyone who has had a little experience of ordering would know how tedious it can be to guide a delivery agent along the tortuous path to the destination. Now, imagine robotaxis in this scenario — an end to end solution is impractical. There needs to be designated pick up points. And, for a vehicle even with meagre 4 LiDARs costing at $10,000 each, would be too expensive compared to the wages and energy of a delivery agent on a 2 wheeler!

Given the dearth of progress and ground reality of self-driving tech globally, delivery startups have already taken the aerial route. Delivery by drone is currently being considered. In India, DGCA has permitted food delivery startups like Swiggy to have trial runs with drones. The self-driving companies either have to make a breakthrough at the algorithmic level or have to convince the governments to pour money into building infrastructures for separate lanes etc. Considering all odds, drone delivery might get a head start before robotaxis.