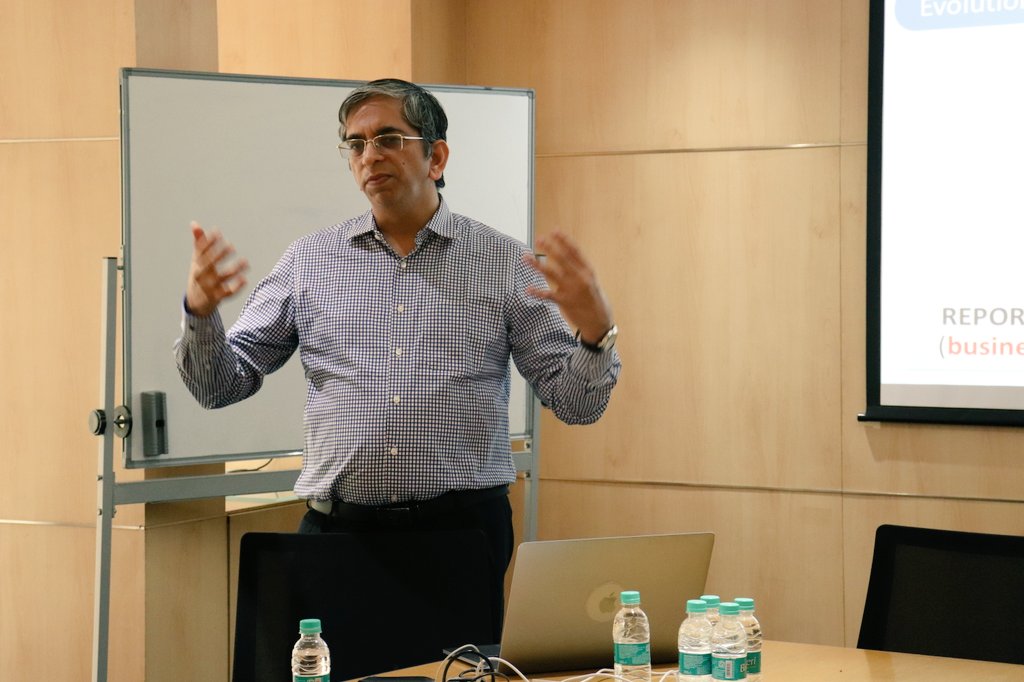 “For me, data science is not about data, it’s about state thinking where sensor data has to be converted to a number of state vectors,” says chief data scientist at Jio. He also says a successful artificial intelligence system is an interconnected ecosystem of AI models.

Dr. Shailesh Kumar is presently the Chief Data Scientist at the Centre of Excellence in AI/ML, Reliance Jio. As one of the top data scientists and renowned AI experts in India, Dr Shailesh has also worked as a distinguished data scientist at Ola cabs, as a researcher in the Google Brain and Yahoo! Labs, principal development at Microsoft, and also co-founded his edtech company Third Leap.

With more than 20 years, Dr Kumar has published more than 20 international research papers and holds more than 20 patents in artificial intelligence and machine learning. At Jio, he says he is reimagining education, agriculture, healthcare, mobility, energy, environment, safety and security in the age of digital connectivity and AI.

During the Hyderabad round of Machine Learning Developers Summit by Analytics India Magazine, Dr Shailesh Kumar, Chief Scientist at Jio gave a talk on the rise of ecosystems of models for AI. Dr Kumar’s presentation focused on the various ways in which the AI industry is changing and what data scientists should focus on to prepare for it.

“It has never happened before that so many different kinds of technologies have come together not because they needed each other but independently developed. Devices, AI/ML, cloud, IoT, blockchain. Now, the question is, how do we think about taking advantage of this ecosystem of techs which we have. The next generation of engineers, data scientists, product managers will have to create a new kind of ecosystem thinking and not traditional thinking,” Dr. Kumar said.

According to Dr. Kumar, successful AI today is not a collection of models but an ecosystem of models. He envisions a common framework that can be used for AI independent of all the varying industries, big data sets, verticals and objectives. “After 20 years of thinking about it, it turns out to be a simple framework. For me all intelligent systems are a stimulus, response and learning systems,” he said.

Indeed in a world of sensors and data, there is a lot of stimulus data. For example, IoT sensors in a plant is a stimulus, credit card data is stimulus, social media stats, etc. all of which companies can utilise to bring positive response or action. So, what to do with all of the stimulus data?

“For me, data science is not about data, it’s about state thinking. So, if you are in retail, you need to know what is the state of the customer is, or state of the store in terms of inventory level or cost of inventory and so on. Sensor data has to be converted to a small number of state vectors. You need to know what the entities are in a business and how you characterise the high level notion of state of those things,” Dr. Shailesh Kumar, Chief Data Scientist at Jio said.

According to Dr. Kumar, once data scientists know the state of entities, they can then convert a state into action, which is followed by the final response to the stimulus data. Dr. Kumar tells that all of this can be coded into an IT system also, where you can write a bunch of rules and have the stimulus data converted into state information and then into action. But, it does not end there.

“This is not yet an intelligent system, and what makes it intelligent is the feedback loop. This is one of the most critical innovations in the last 20 years which is collecting lots of feedback data to improve the system of analysis. This continuous loop is what AI is. All the ML algorithms that we can think about are either stimulus to state algorithms (clustering, demand, price forecasting) or state to action algorithms. Now, when you look at AI from that perspective, it’s easier to understand which courses to take and modelling techniques to learn,” said Dr. Kumar, Chief Data Scientist at Jio.