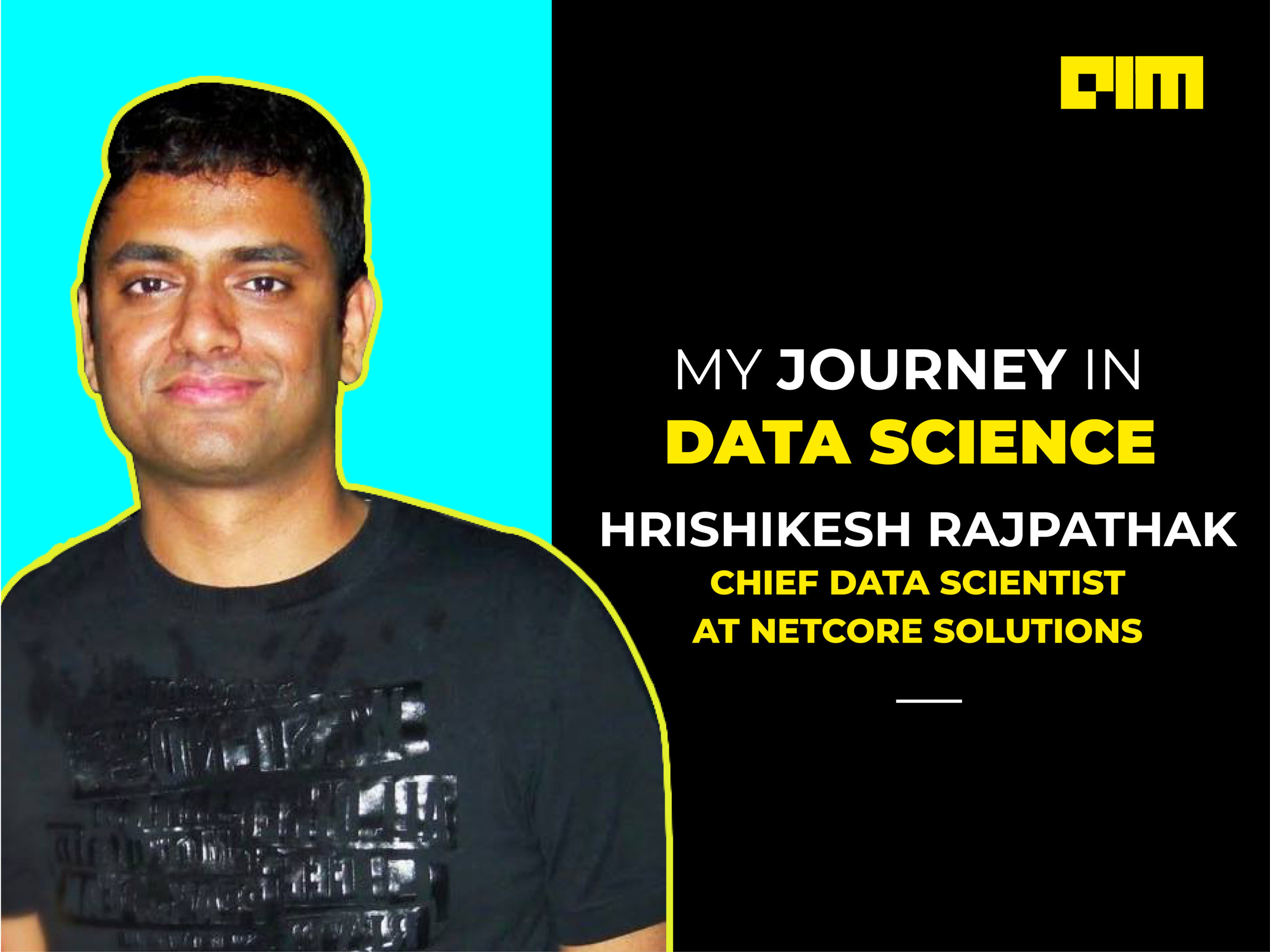 Switching career in data science is not a straightforward path. One needs to have a perfect plan for getting a big break. Usually, professionals complete online courses and think they have acquired the knowledge to make the final leap into data science domain. However, having the ability to make basic machine learning models is not enough; aspirants need to dig deep into various things to differentiate themself and get the desired job offer. Undoubtedly, online courses are a good start, but that doesn’t make you a complete data scientist.

To understand how one can plan their way up and make it to the data science domain, Analytics India Magazine interviewed Hrishikesh Rajpathak, a chief data scientist at Netcore Solutions, for our weekly column My Journey In Data Science.

Rajpathak’s interest in computer science started during his schooling when his father bought a second-hand computer. He developed an interest in coding while he was in school. However, he pursued an Electronics and Communications Engineering stream in bachelors, which he says had nothing to do with programming. But, Rajpathak was determined to be a software engineer and got a job at Persistent Systems in 2006.

In his first job, Rajpathak worked on life science domain and used Java and MySQL tools. At work, he often collaborated with microbiologists and doctors as he was part of the team that was working on cancer research. However, Rajpathak’s journey in data science began when he witnessed how data was being analysed for cancer research. Understanding the importance of data, he started learning R programming, statistics, and other data science-related articles. “In the early years of my first job, I was enlightened by the potential of data in different use cases,” says Rajpathak.

Rajpathak since 2007 spent 3 to 4 years mastering data science while still working as a software engineer. Unlike today, there was a shortage of online resources for learning the ropes of data science, so he mostly relied on books. As Rajpathak was proficient in programming, he didn’t struggle to learn R and Python from books, but obtaining the domain knowledge was difficult for him in the early days. Rajpathak journey in data science had different roadblocks as a dearth of an active data science community slackened his learning.

Nevertheless, Rajpathak didn’t lose his interest and kept looking for solutions over the internet and sought help from others to mitigate challenges. “Although I have learned data science as the technology evolved over the years, it was difficult to get started,” adds Rajpathak. “Today, in contrast, it is easy to start but challenging to learn domain knowledge as data science is a vast field now.”

Rajpathak didn’t look for a job, he was interested in developing solutions using his data science skills. His first startup, Seven Labs Limited, was a social media analytics tool, but he said it was a failure. Then he worked on a food recommendation engine, which was moderately successful. Eventually, Rajpathak third startup Quinto.ai – AI chatbots providers – made the noise in the market. Unlike today, chatbots in 2015 were not a household name, so developing them was the most successful project in Rajpathak’s journey in data science. In 2019, the company was acquired by Netcore Solutions, where Rajpathak has joined as a chief data scientist.

Today, as a chief data scientist, most of Rajpathak’s day-to-day activity involves managing a team of data scientists. However, he also takes a project in which he works alone to keep learning in the process and stay competitive in the domain. In addition, Rajpathak also hires data scientists, but for entry-level data science jobs he prefers statisticians over engineers. He believes the former become better data scientists than the latter. And since getting a data scientist for a senior role is relatively difficult, he leverages his network and asks for referrals.

In the interview, Rajpathak evaluates the proficiency of applicants in statistics, mathematics, and ML projects. Besides, he also assesses candidates by asking them about the projects that they could not finish. This allows him to get an understanding of aspirants’ approach towards solving problems.

Talking about how aspirants should strategise their roadmap to learn without getting distracted with a plethora of tools and techniques, Rajpathak said one should focus on improving the machine learning models instead of doing numerous projects. Often data scientists complete the projects by achieving a mediocre accuracy. Rajpathak says such an approach does not enhance the expertise of data scientists. He said one should try to get higher accuracy.

“Data scientists should spend time with data to understand the nitty-gritty of data. To get higher accuracy from ML models, one needs to thoroughly visualise and evaluate by getting deep into data and not just get an overview by doing simple exploratory analysis,” explains Rajpathak. Besides, Rajpathak also suggests testing their skills on Kaggle, learning to read research papers, and continuing to revise the basics. He eventually concluded by saying that data science cannot be learned in a few months, it takes years to master in the ever-changing data science landscape.

Top 11 languages Which Can Fetch You Good Salary In 2020