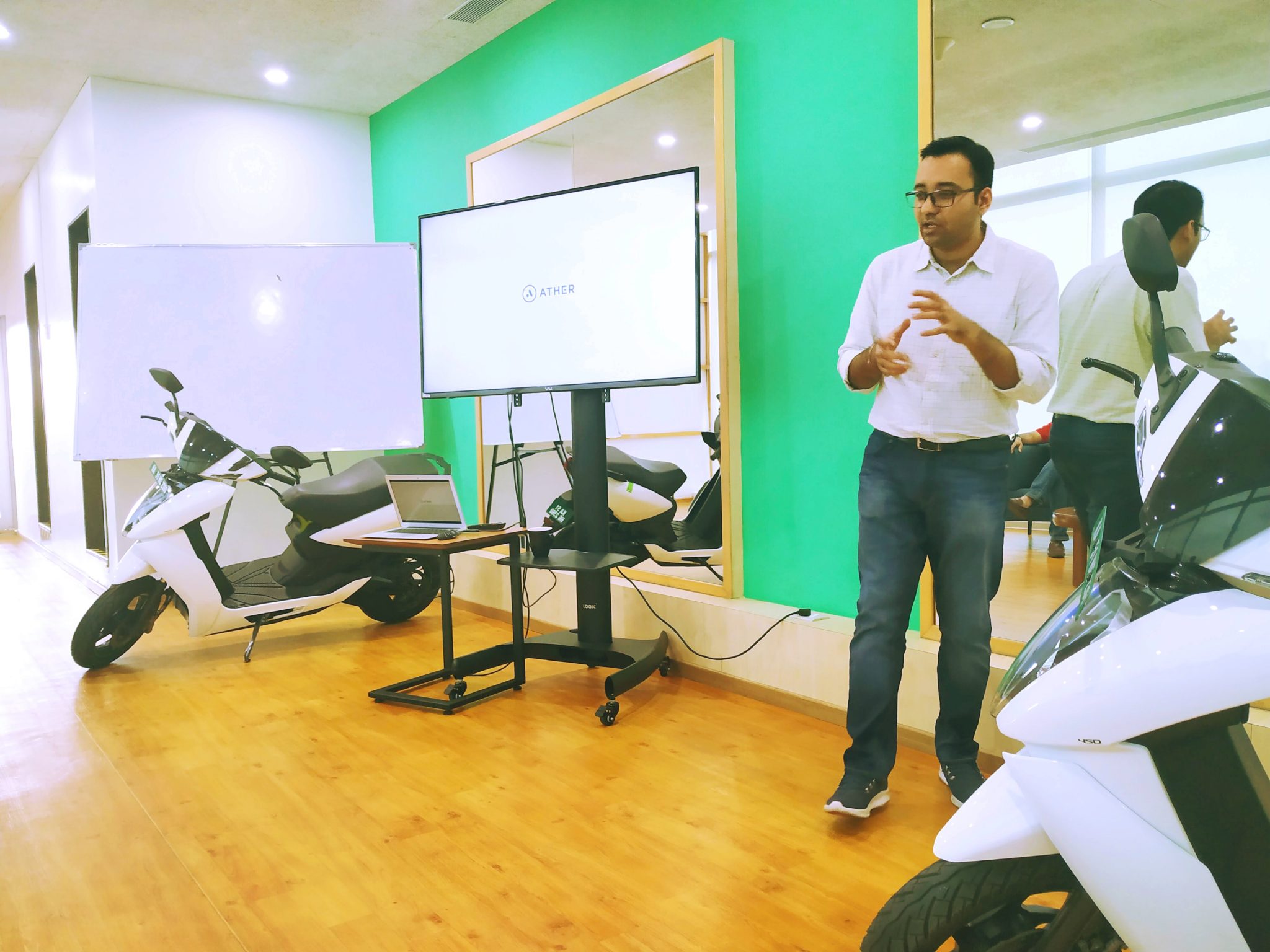 Ather Energy came into existence in 2013 when co-founder Tarun Mehta along with CTO Swapnil Jain came together to launch India’s native smart two-wheeler startup. In 2014, the startup received a small investment of $65,000 from the Department of Science and Technology, IIT Madras and Srini V Srinivasan, founder of Aerospike. Then in 2019, Ather raised $51 million in a funding round led by Sachin Bansal.

Most new innovations in the automotive world are driven heavily by software-connected, autonomous, shared and electric vehicles. While innovation typically flows from four-wheelers to two-wheelers, it may not be strictly true in the Indian context. The launch of the Ather 450 is the real example of a connected two-wheeler — and not just a Bluetooth vehicle typically in the electric two-wheeler category.

In this latest column of Deep Dive, Analytics India Magazine talked to Ather Energy’s co-founder and CEO Tarun Mehta to understand what the smart automotive startup is planning in the near future.

Ather Energy came into existence in 2013 when co-founder Tarun Mehta along with CTO Swapnil Jain came together to launch India’s native smart two-wheeler startup. In 2014, the startup received a small investment of $65,000 from the Department of Science and Technology, IIT Madras and Srini V Srinivasan, founder of Aerospike. Then in 2019, Ather Energy raised $51 million in a funding round led by Sachin Bansal.

Despite being in existence for more than 5 years, the company is currently manufacturing less than 1,000 scooters each month. It begs the natural question of why things have been a tad slow for the much-hyped smart scooter. According to Tarun Mehta, he is in the long run to capture the market, and for them, the sales and manufacturing capacity are not the primary focus areas right now.

“We have been clear for years now that our first phase revolves around learning about the market. We will sell as much as needed to learn from the market and make sure we are setting ourselves up for success. It’s never been about how much units we can sell. In fact, we have sold units at a loss, because it’s just a marketing cost, product learning process.”

Tarun says that discussing Ather Energy’s numbers by capacity and the size of its plants is the wrong metric. “We have been clear for years now that our first phase revolves around learning about the market. We will sell as much as needed to learn from the market and make sure we are setting ourselves up for success. It’s never been about how much units we can sell. In fact, we have sold units at a loss, because it’s just a marketing cost, product learning process. The metric for us has never been how many units we have in the field, but do we have the right supply chain and the right tech set up for the right cost structures and right product line.”

Ather Energy Says Data Analytics Is Critical For The Company

Given there are many touch-points, including about 50 sensors and mobile app, the team ensures that every single part of the vehicle is effectively connected and the data out of it has come out reliably. This needed a lot of effort and overcoming multiple roadblocks successfully, says Tarun.

“We have a lot of data being generated but analysing data was fun when there were 50-100 vehicles but now with a few thousand vehicles on the road and all of them being connected, churning out a lot of data back and we have committed on massive pipeline of feature upgrades and everything, at this point we are focusing on those commitments, making sure infrastructure, production and software side is working well at all times.”

Apart from making sure the touchscreen always works and the navigation works even in all the black spots on the mobile app, the team pushed out a recent feature over-the-air, which allows the people to see the right statistics as soon as they close the ride, along with the entire history.

“That alone opened up a massive requirement to maintain the data up reliably up all the time. The team’s focus is to consistently make sure that when once users close the ride, all the data immediately gets uploaded and the stats are available on the dashboard,” said Tarun.

The Ather product team has also been able to improve many of the hardware features of the vehicle by software upgrades like OTS with whatever bugs we found even in the hardware of the vehicle, for example making software upgrades in Battery Management System (BMS) settings to optimise battery usage. According to the company, with a thousand vehicles on the road, it can even to map out where the potholes are in the city using GPS coordinates and acceleration response.

Tarun said, “One data point probably won’t tell whether the pothole is but having a thousand scooters go over a road every day for a year, now you have a million data points, the average of all those will get a very realistic picture of the potholes.”

Proprietary Innovation Has Been The Focus

Ather Energy has now taken up a large manufacturing space in Hosur, and Ather Grid Public Charging Network is live across 10 locations in Chennai and 26 locations in Bengaluru.

“R&D has to be the step for the first few years. If you miss that step, you may be just a manufacturing company that just produces things but doesn’t know how to respond to the market when the larger funded startup comes with a more innovative product.”

While sales and manufacturing capacity may not be the centre of focus currently, innovation has been certainly going strong. Ather has developed most of its innovation independently without buying software stacks from anywhere else. The OS is a Linux version which the startup team modified for its needs. The data pipeline, the middleware is all proprietary. For Cloud, it leverages Google Cloud IoT and also has its own analytics layer which it pickups data insights.

“All the applications, the navigation layer is ours which we created from Google APIs. Actually took us a few years to understand that while we kept calling ourselves a vehicle OEM, we are actually doing a much bigger job. So, in our case most of the core technology that you see, the battery, the Battery Management System (BMS), the charger, the touch screen and dashboard gear, the software stack, all that was developed in house. We have the largest R&D in India for connected vehicles. ” Tarun said.

The startup team is also working on releasing new smart features like Navigation 2.0, geofencing, smart commute planner, performance analytics, user analytics. Ather also has a very active online community, where its customers even act as moderators on the community. For the sake of ownership experience, the startup runs owner events, with hundreds of users registering.

“We have been super engaged with the users even when we have software bugs in the vehicle, to help give us feedback and enhance customer experience,” according to Tarun.

Gartner’s Hype cycle for Emerging Technologies 2016: The Hits and Misses

Are Connected Cars the Future of automobiles