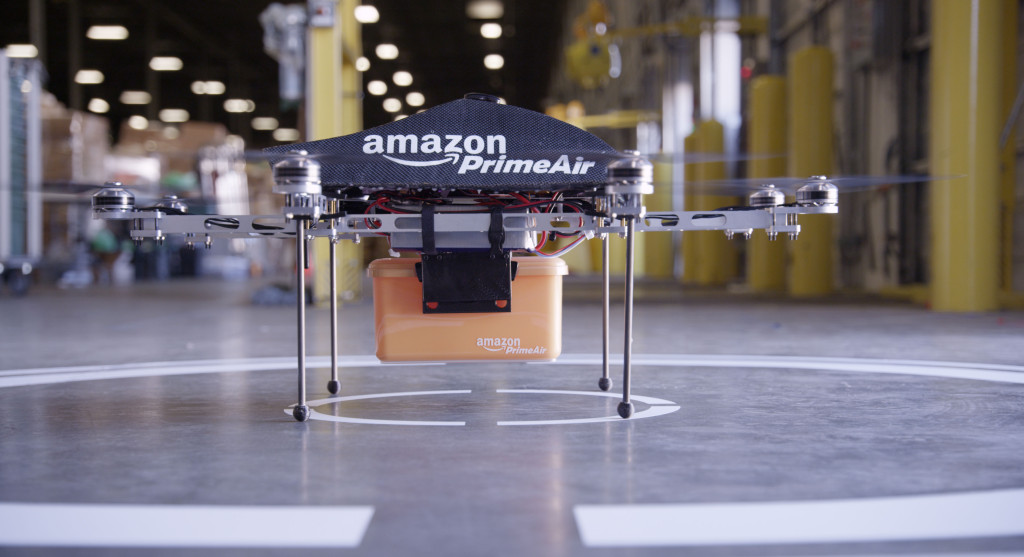 We have seen in the past how artificially intelligent programs are being used by e-commerce players for image/video search, diving deep into understanding customer preferences or using chatbots and virtual personal assistants for enhancing customer-brand interaction, but this time around it’s a different application of advanced tech that we are talking about. Its drones and intelligent logistics, that have become talk of the town.

Gone would be the days of manned deliveries stepping onto your doors, as e-commerce giants are looking forward to adopting technologies like drones to deliver your parcels! It wasn’t long back when the e-commerce giant Amazon had filed a patent application to introduce drone technology with respect to propeller safety in India, and later came up with another patent application for exclusive rights on multi-scale fiducials. With this, the company aims to get the rights for black and white marks on any object for self operating aerial vehicles, so that it can be
identified from different distances.

Not just drones, but to cope up with the high demands during festive season and big sale days, the e-commerce players are also adopting deep technology and intelligent logistics solutions for quicker and efficient sorting of packages at warehouses, enabling better address matching, route optimization and much more.

In its first ever, Alibaba delivers packages via drones

Alibaba, a Chinese e-commerce conglomerate, recently claimed to have used drones to deliver packages over water for the first time. It said that three unmanned aerial vehicles carrying six boxes of passionfruit flew from Putian in China’s eastern Fujian Province to nearby Meizhou Island. The boxes’ combined weight was 12 kg. The drones covered the distance of five km in nine minutes, flying into a strong wind. The drones were jointly developed by Alibaba’s delivery arm Cainiao Network, company’s rural shopping platform Rural Taobao, and a domestic technology firm.

Other ecommerce players from across the globe are also integrating robots and drones to solve the bottlenecks that may arise due to high orders. Adopting automation technology has become the next big thing and very recently China’s second biggest ecommerce player JD.com also launched the first unmanned sorting center, with an aim to develop intelligent and high-efficient logistic systems.

India pacing up with the use of drones and intelligent logistics These developments are suggestive of the fact that, while technologies like AI, chatbots, machine learning, drones and others are seeping across various sectors, its adoption has been equally swift in the Indian ecommerce industry. These advanced techs are becoming a way out for increasing the overall efficiency, cost saving and most importantly customer satisfaction. We list down five major developments by India in the area of drones and intelligent logistics in ecommerce.

1| Indian Government’s announcing that drones for ecommerce may soon be a reality: As Amazon filed patent for the use of drones in the country, Indian Civil Aviation Ministry announced earlier this month that it would soon be a reality to witness the use of drones and unmanned aerial systems for commercial purposes such as the delivery of ecommerce packages at customer’s doorstep. With the issuing of draft regulation, it wouldn’t be unlikely to see drones operating for ecommerce and other sectors by 2018.

Jayant Sinha, Minister of State for Civil Aviation was reportedly quoted as saying that e-commerce deliveries using drones are certainly going to be possible in India, and that companies like Amazon and Flipkart would be able to deliver products with the technological developments in the aviation ecosystem.

2| Amazon introducing amazon Prime Air like services in India: Amazon Prime Air, a delivery system designed to deliver packages to the customers within 30 minutes or earlier using drones has been quite popular in the US. Apart from conducting trials in the UK to gather data to improve safety and reliability of these systems, the ecommerce giant is keen on bringing the technology to India. Apart from its patent application for drones, the company is also believed to have made fresh investment in its logistics unit Amazon Transportation Services in India. This is line with their interest to drone deliveries in India, which may soon be a reality given the announcement by Directorate General of Civil Aviation.

3| Flipkart’s ambitions of introducing drones in rural areas may now come true: Two years’ back India’s leading e-tailer Flipkart had wanted to use drones to deliver goods to rural areas. “We are looking at drones for rural deliveries,” the company had said then. With the policies being framed in place and competitors gearing up to introduce drones, it might not be unusual to see Flipkart investing in the technology as well.

4| Intelligent logistics solution by Locus is striving a way: Locus, a 2015 founded company has been optimising logistics operations to provide consistency, efficiency & transparency, and delivering transformational value in logistics for organisation. Its proprietary algorithms have been solving complex problems such as load balancing, route optimisation and container utilisation. It is currently offering automated logistics for leading enterprises in India such as Urban Ladder, 1mg, Quikr, Lenskart, Licious, and others.

Nishith Rastogi, CEO & Co-founder, Locus shared “With increased competition, the key differentiator for e-commerce business to survive is by providing exceptional customer experience and reducing costs at scale. Reducing human dependencies through automating critical business decisions, effectively managing operations, reducing costs and taking deliveries to the next level is possible by adopting Drone Deliveries, Intelligent Routing Engines and imbibing Machine Learning & Artificial Intelligence through them. In today’s age where the mantra is to ‘evolve or be disrupted’, companies will have to leverage technology to
reinvent & scale their businesses.”

5| Other solutions like Delhivery taking a lead in offering intelligent solutions: Logistic firms like Delhivery and Mera Transport have been using smart technologies, data science and analytics to manage their logistics, track and analyse their shipments end to end. Delhivery’s intelligent solutions have been helping ecommerce companies by tracking fake products and keeping a strong check at it. They have developed a software solution that runs image recognition checks and analyses each shipment using AI to spot fake products.

With an increasing interest to use drones and intelligent logistics to take e-commerce a step ahead, it wouldn’t be longer to see home grown ecommerce companies like Flipkart using drones to deliver goods. It could be particularly useful in rural areas, and in cases of faster deliveries, where packages have to be delivered to customers within 30 minutes or earlier. While intelligent logistics have found a way in India, we are yet to see drones making a headway soon.

This Is The Perfect Time For Zomato, Swiggy and Dunzo To Take Their Drones Out In India

Future Of Getting Dressed: A Look At How India’s Fashion Retailers Are Leveraging AI As Personal Stylists