Telangana Partners With Intel, Nvidia & IITs To Set Up An AI Hub 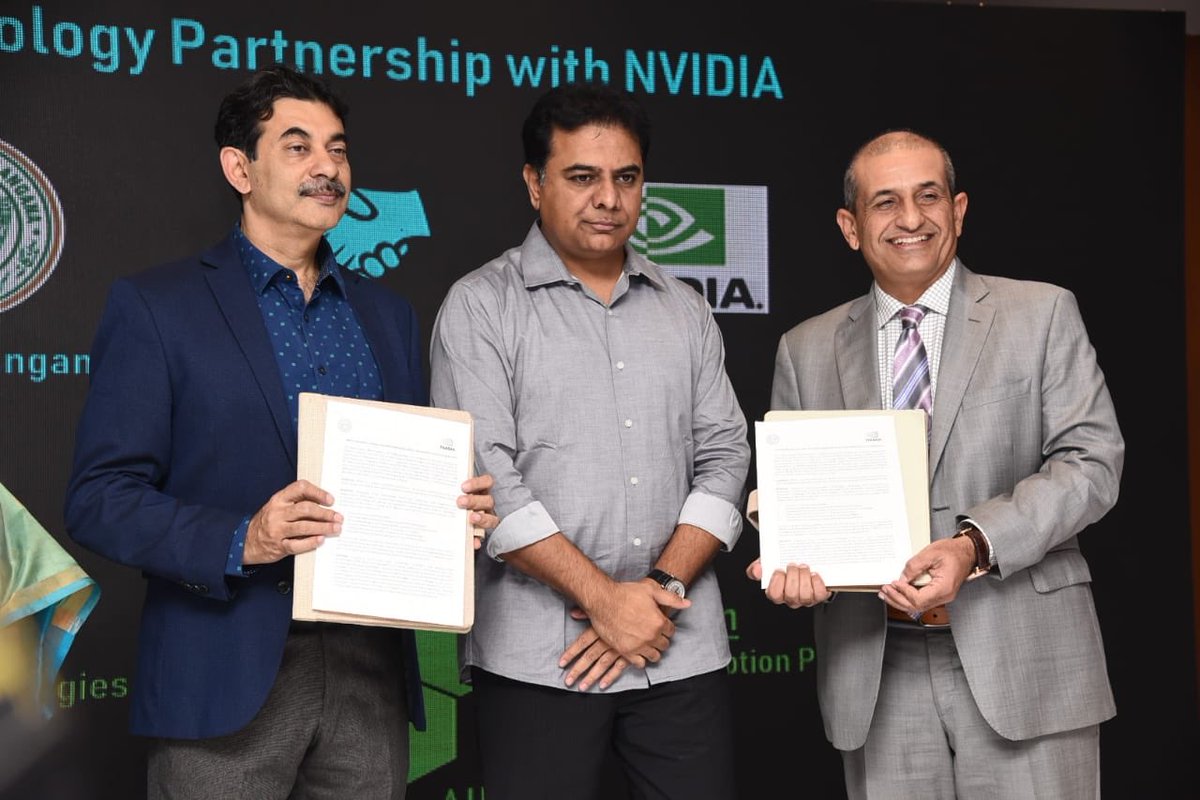 Last week, as the nation prepared to welcome the new decade, the Government of Telangana has been busy ushering in 2020 as the state’s “Year of AI”.

The IT wing of Telangana government has announced their mega plan for the coming decade and how they want to put Hyderabad in top 25 global AI innovation hub.

In a follow up to that announcement, last week, IT minister K.T. Rama Rao has signed an MoU with giants of AI industry Intel and Nvidia along with IIT Kharagpur and IIIT Hyderabad, to set up an AI hub.

On 18th Dec, a roundtable was organized in the capital city of Hyderabad, to formulate AI-specific incentives and Telangana’s AI strategy framework document. AI experts from all over the country are contributing to the document, and it will be finalized after several rounds of consultations.

“The state has already operationalised its blockchain framework document along with its drone framework document. With AI and big data analytics, it is expected to generate 800,000 jobs in India by 2021,” said Sri Jayesh Ranjan, Principal Secretary, ITE&C Department, Government of Telangana, in a press release.

He further added, “Telangana will now launch it’s AI program in 2020, which will be implemented by NASSCOM and is guided by the AI framework document.”

Yesterday, KT Rama Rao, Hon’ble Minister of ITE&C, I&C and MA&UD have officially declared 2020 as the ‘Year of AI’ for Telangana, announcing exciting AI projects and launching the calendar of events in the presence of other dignitaries from the Indian government.

Industry leaders and several academic leaders have also joined in to design the year of AI programme, and have officially signed MoUs with the government. Additionally, all major industry leaders like Intel, Nvidia, Adobe along with other AI experts have come together for the inaugural celebrations in Hyderabad.

Telangana’s IT minister, K.T.Rama Rao, began his speech by thanking the companies and institutions that have come on board to take up this prestigious and ambitious initiative. Rao spoke briefly about how AI has been empowering the people of Telangana. He cited the example of farmers, who can now just upload a picture of their infected crop using their phone and get immediate suggestions on how to proceed to solve it.

Talking about this mega collaboration, Rao, stressed on why the isolation is not the way to go when it comes to working with emerging technologies and that is one of the reasons they have decided to join forces with top players in AI.

He also highlighted the remarkable use of AI in building anti-collision devices to curb road rage. AI for public health monitoring is another AI use case that he mentioned.

All the institutes in Telangana have been asked to start an AI module from the next academic year.

Drawing parallels from the IT surge back in 1999, Rao reminded his audience about how people were sceptical 20 years ago about the role of IT in job creation and today, the same goes for AI too. However, the IT minister declared himself to be a strong believer in all of these emerging technologies.

Rao also noted that AI is capable of creating many jobs (~800000), and he has drawn parallels from the IT job surge that picked up the pace, a couple of decades ago.

We don’t have the luxury to progress slowly if we want to take our country to the next level.

Rao had also acknowledged the privacy issues that come with data exploitation.

In his speech, Rao acknowledged NITIAayog’s 2018 paper, which states the importance of leveraging AI for both economic growths as well as social inclusion. Rao’s speech also hints his seriousness about the problems of ethics, privacy and bias that surface during the implementation of AI-based services.

Last month, Intel India has announced the expansion of its innovative footprint in India by unveiling a new design and an engineering centre in Hyderabad. This inaugural ceremony was graced by K.T. Rama Rao, Minister of IT, Government of Telangana and Intel Senior VP, Raja Koduri along with other delegates.

AI has the potential to add $13 trillion to the world economy.

Intel along with Nvidia has been spearheading the AI hardware revolution around the globe. So far, Bengaluru has been the hub for experimenting with emerging technologies. Today, thanks to the aggressive push by the government of Telangana to establish itself as the hub for all emerging technologies at the global level, top players in the technology sector are looking towards the state with their innovations. All top companies like Google, Amazon, Apple already have opened offices in Hyderabad. Added to this, there are academic institutes like IIT and IIIT Hyderabad, that introduce next-generation cutting edge technology by offering courses and establishing labs.

The government of Telangana has set a great example to the rest of India by taking the competition to the international level with their proactive initiatives. This also resonates in the speech of K.T.Rama Rao, as he warns everyone about the slow progress of the nation and the importance of using every tool and technology at disposal to become the digital hub of the world.

Countries like Singapore too, under the leadership of Lee Kuan Yew, have taken ambitious and often impossible tasks over their shoulders and managed very well to surpass the expectations. It is a very promising sign that the government of Telangana, is taking up this audacious challenge that has the potential to change the course of the nation in the coming decade.