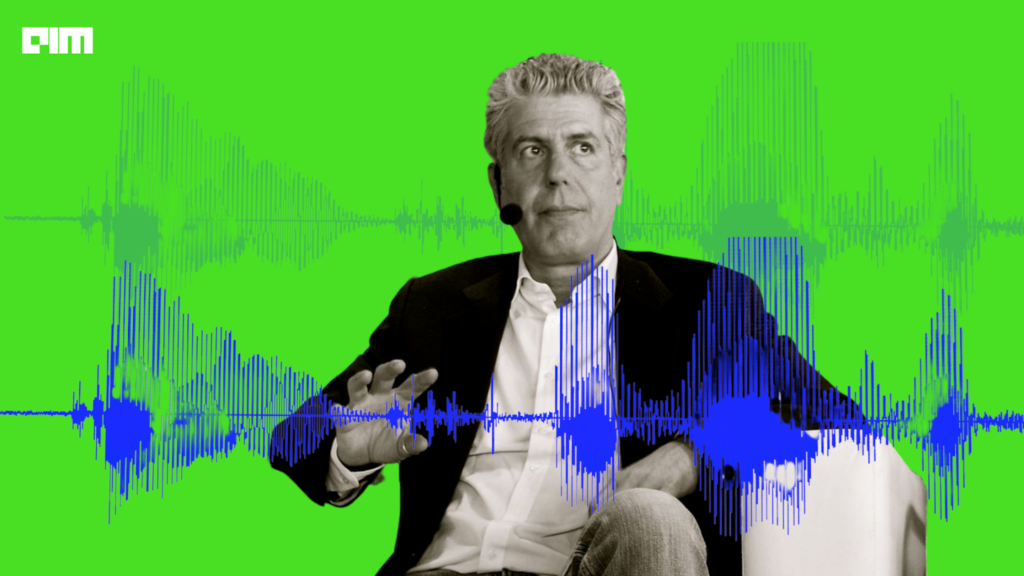 Morgan Neville’s new documentary on Anthony Bourdain has a few lines of AI generated dialogue in Bourdain’s voice. Neville’s use of a voice cloning software to deep fake Bourdain’s voice for a commercial documentary, Roadrunner, has sparked criticism and ethical concerns.

The documentary on the chef’s life and tragic death includes three digitally recreated quotes“… and my life is shit now. You are successful, and I am successful, and I’m wondering: Are you happy?” an AI algorithm narrated a voiceover of Bourdain.

Neville said deepfaking a dead man’s voice was not a dystopian application of the technology.

Voice cloning software, Descript’s, overdub feature helps create speech based on text input. All it takes is a mic and 10 minutes of the user reciting a script to train Overdub- that uses machine learning to convert soundwaves into a written script. Once the user’s voice is recorded, the software can add or change words, According to Descript’s blog post: “If you want to change an adjective, add additional context, or reword a sentence in the middle of a podcast or video, you no longer need to make a trip to the recording booth to do so”.

“As part of the Overdub Voice training process, users must read a script in which they affirm their identity and positively consent to Overdub Voice creation. Training data which does not include this consent statement cannot be used to create an Overdub Voice,” the blog adds.

Andrew Mason, the founder of Descript, said he get frequent requests to clone voices of the deceased. “Unapproved voice cloning is a slippery slope – as soon as you get into a world where you’re making subjective judgment calls about whether specific cases can be ethical, it won’t be long before anything goes”, he wrote.

The latest development has rekindled the debate around the future of voice cloning technology- be it in entertainment, politics or the commercial sector.

‘Doesn’t a person relinquish that control anytime his writing goes out into the world?’ – Helen Rosner, New Yorker.

Sam Gregory, the program director of Witness, a nonprofit dealing with the ethical applications of technology, spoke about the root of this discomfort lying in the principles of consent and disclosure. The film triggered an extensive discussion on the ethical use of artificial intelligence. The voice cloning of a dead person without consent didn’t sit well with the audience.  “It speaks to our fears of death and ideas about the way people could take control of our digital likeness and make us say or do things without any way to stop it,”Gregory added.

Neville claimed he got the consent of Bourdain’s widow, Ottavia Busia. But she later tweeted: “I certainly was NOT the one who said Tony would have been cool with that.”

Viewers might be comfortable with synthetic media in fiction. But, when it comes to a real person, disclosure and consent are paramount.

Gregory suggests a few solutions, including licensing voices with consent, appropriately labelling and disclosing the use of synthetics in media and having a consensual protocol on handling synthetic material.

Meredith Broussard, author of the book ‘Artificial Unintelligence’, shared a similar view calling disclosure imperative to the use of AI. According to her, ethics is about context. While three lines in a documentary are not that significant, it is vital to use it as a precedent and discuss technology ethics.