The government needs to recognise “esports” as a sport: ESFI Director Lokesh Suji 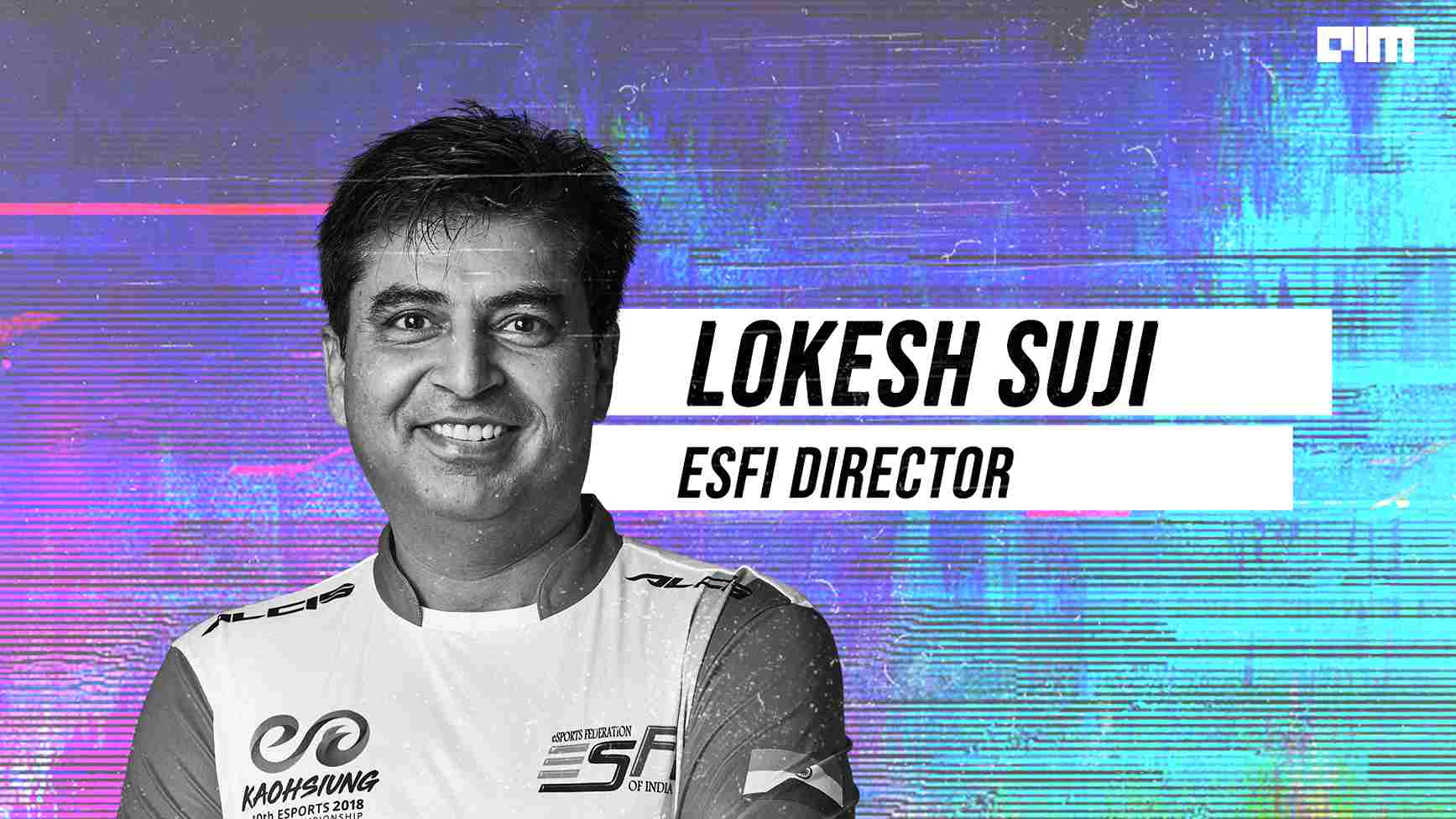 The Esports Federation of India (ESFI) is all set to host a qualifying tournament to pick the Indian contingent for this year’s Asian Games in China. India’s gaming ecosystem is growing at a fast clip. According to EY India, the esports industry is expected to grow at 46% CAGR over the next four years, with streaming platforms poised to account for the lion’s share of revenues.

Analytics India Magazine got in touch with Lokesh Suji, Director, ESFI, to understand India’s road to Asian Games 2022 and his journey. Lokesh grew up in a small town in Haryana (Ladwa) and completed his bachelor’s and master’s in tourism management from Kurukshetra University.

AIM: How did you get into video games?

Lokesh: My father introduced me to gaming; whenever I used to do well at school, my father used to take me to an arcade in Yamuna Nagar as a reward. We competed to get the highest score in a car simulation video game.

I am a die-hard fan of the Call of Duty Franchise. I prefer the FPS genre, but I keep playing MOBA / Battle Royale / RTS games on my mobile.

But when you get into corporate life, you don’t get much time; but everything changed after I got an Xbox. I always believed in the power of the Internet, and I realised the potential of ‘Internet + videogames’ way back in 2013, and that’s when I moved on from my corporate life and shifted entirely to esports.

We used to organise esports events under the “Indian League Gaming” banner. We took the first and only Indian esports Team for Major League Gaming’s World Championship in New Orleans back in 2015– we were the only team from Asia. Although we didn’t win anything, being part of the MLG event is a big achievement.

AIM: Can you shed some light on the AESF Road to Asian Games?

Lokesh: We will be hosting the National Esports Championships 2022 (NESC2022) under the “AESF Road to Asian Games” program to select the Indian esports contingent for the much anticipated Asian Games. The registrations are open till April 1, 2022, and the matches are scheduled to begin on April 4. The players will then participate in AESF RDAG Regionals to decide the seeding for the main event at Asian Games 2022.

Out of the eight medal games, Indian esports aspirants will be competing in the five popular games – Hearthstone, DOTA 2, FIFA 22, Street Fighter V & League of Legends.

Professional esports athletes and esports enthusiasts across the country can register on the open platform.

AIM: How did the INOX deal come about?

Lokesh: Esports has become a popular spectator sport with a huge fan following. As esports is all set to make its debut as a medal sport at the Asian Games, INOX Leisure, the Indian multiplex chain, stepped in, taking esports tournaments to a much bigger screen and multiplying the excitement and action of esports gaming.

INOX caters to a highly urbane and youthful audience, and esports coming to cinemas will further popularise it. With this partnership, we plan to engage in two formats. One in terms of watching the live esports streams in a cinema environment, and the other will allow esports athletes to come to INOX and compete together in a LAN environment.

The partnership aims to provide a rich community viewing experience of esports tournaments by taking the live-action to the big screens. We plan to host tournaments, conduct workshops, and build a networking hub for gamers and those associated with the growing community.

We also plan on using these spaces as training facilities for esports athletes. The possibilities are endless, and these constant engaging activities will create awareness regarding gaming. The experience helps the entertainment and esports community to flourish. There are several broadcasters, brands, organisers and publishers who will be able to commercialise Indian esports tournaments easily. The partnership will encourage more footfalls to the multiplexes and encourage people to get closer to the world of esports.

AIM: Why did you choose INOX specifically?

Lokesh: The most important factor was their commitment to growing Indian Sports (they have already partnered with the Indian Olympic Association). The second is the rich experience they provide. And to host events or tournaments, the location of these multiplexes matters a lot. INOX is spread across the country, and its multiplexes are at prime locations, making them the perfect fit for the success of our partnership.

AIM: Should we have institutions focused on game development to boost the ecosystem?

Lokesh: There are institutions for video game development. But video game development and its ancillary courses are not yet part of the mainstream curriculum. On the other hand, we don’t have any institutions dedicated to esports. These are an absolute must if India wants to see more professional esports players and win medals in the Olympics and other international events.

There is a great opportunity for skill development and training for our budding and aspiring esports athletes at the grass-root level. This would provide them with formal training and guidance.

AIM: What role should the government play in developing the esports industry?

Lokesh: First and foremost, the government needs to recognise “esports” as a sport. The inclusion of esports in “Khelo India” will give a massive boost to our sport. Currently, most of the leading esports game titles in India are not made in India. The government should also encourage the video game sector to build world-class AAA titles. The announcement of the AVCG Core committee’s setting up is a positive step. Still, it’s important to have the right people (from the video game development side) to deliver the right results.

I believe Indian esports athletes have the full potential to beat their global competitors. Tirth Mehta won a bronze medal in Hearthstone during the Asian Games 2018 when esports was introduced as a demonstration event, which gives us high hopes.

Esports being considered a medal sport is a big change in itself. This would encourage more players to upskill themselves and prepare to compete for national/ international tournaments, representing India and bringing honour to the country. I think this would unleash more opportunities for the esports segment.