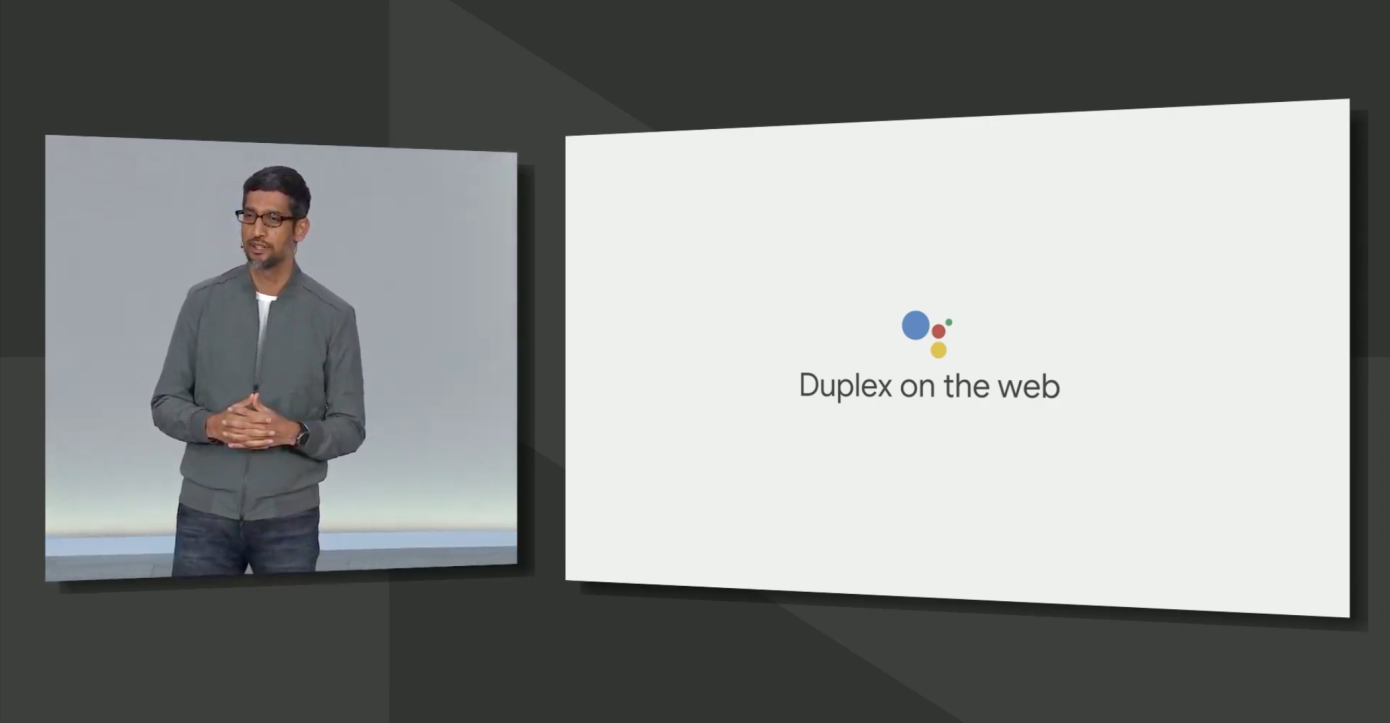 Last year, tech giant Google in its annual developer conference in Mountain View, California, surprised the world with its human-sounding AI called Duplex. The surprise had both, an awe for what machine learning can make life easier and the risk that it presents to the privacy. In its annual I/O conference this year, Google announced updates to its AI assistant.

In the Google annual conference of two hours, it announced several key updates to its products. One of the major ones was the AI-enabled assistant called Duplex, which is a chatbot that uses AI software to mimic human speech with startling accuracy.

Last year, the company had showcased its assistant could reserve a table at a restaurant or book an appointment at a salon. This was a voice bot and was meant to help small businesses like restaurants and hair salons to field more phone calls, answer questions and schedule reservations and appointments.

The Duplex on the web today is not a voice bot, but an AI on the web itself. The update is called “Duplex on the Web”. At the conference, the online car rental reservation was given as an example of this update. When the user says “get me a rental car” and mentions the company name via which it wants the reservation, the assistant, from the company’s website automatically starts booking the car taking the details like name, address and arrival and drop-off times.

It all does this based on the previous rental confirmations that the user has done and has its data in his Gmail account. It can also pre-fill things like trip dates from the calendar and book appointments.

This assistant can carry out tasks like filling forms. CEO Sunder Pichai at the keynote showed how Duplex can fill out a car rental reservation form online with the help of the user’s information and then submit the request for the reservation too, like movie tickets. Whenever the system needs more information, like a price or seat selection, the process pauses and prompts the user to make a selection. Before submitting the request it lets the user confirm the details.

The new assistant can also perform tasks with Google Lens which is an image recognition technology designed to bring up relevant information related to objects it identifies using visual analysis based on a neural network. The Lens uses the phone’s camera to highlight popular menu items on physical menus and shows how it looks like, even before it is served.

Google has always caught itself into privacy issues. The company has always stressed tools centered on privacy and accessibility. Google has had a huge backlash in March over its AI ethics board which it disbanded right after a week. A handful of workers resigned, and more than 4,000 workers reportedly signed a petition addressed to company CEO demanding that he cancel the project. Google eventually said it wouldn’t renew the Maven contract or pursue similar contracts. Google disbanded the board after only a week. Pichai wound up publishing an entire AI ethics memo that started the company wouldn’t develop the technology for use in weapons.

With its last announcement regarding the Duplex, it had surprised the audience with the voice assistant being spooky in terms of the voice being very realistic and  human-like and the amount of personal information that Google could have possibly used for their machine learning to make this assistant as smart as it seemed.

But the update to the assistant this year did not provoke the responses of the people like the past year. Scott Huffman, head of engineering for Google Assistant said, “The strength of the reaction surprised me. It made it clear to us how important those societal questions are going forward.”

This new update to the web assistant shows that the company has learnt its lesson in terms of privacy.

We do know not when Google Duplex web version’s early preview is going to be launched. The CEO said that more information will be shared later this year. He also said that they are going to be thoughtful and get feedback from users and businesses.

The new assistant does promise that the user can see every step of what Duplex is doing before confirming the details, assuring that a complete control will not be given to the assistant. It appears that as Google is trying to give its users more transparency and control over their data.

This Newly Released Python Interpreter Claims To Be Faster Than CPython