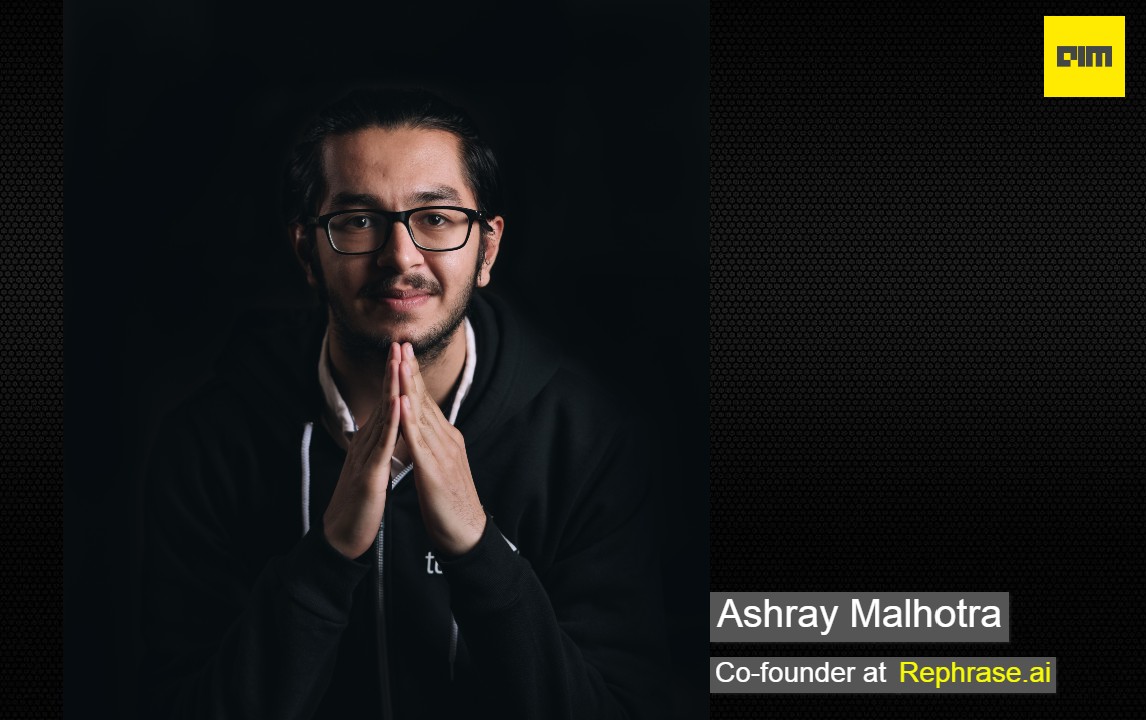 AI has been transforming various organisations and industries, and the usual discussions around morality and authenticity are crucial when it comes to the video making sector. At the present scenario, the AI and machine learning scene are at a relatively early stage in India, where most of the AI and machine learning roles tend to be more in the category of data science.

For this week’s startup column, Analytics India Magazine got in touch with one of the co-founders, Ashray Malhotra to gain a deeper insight into how it is driving emerging technologies to provide seamless video.

Malhotra said, “At Rephrase.ai, as leaders of the synthetic media, generative AI space, we take ethics extremely seriously. We make sure that only credible businesses get access to our text to video creation technology. The future of communication is going to be a combination of synthetic videos and real shot videos, and we are proud to responsibly lead the transition to that world.”

The primary product at Rephrase.ai is a sales personalisation platform. According to Malhotra, the platform lets the user pick a model, choose a voice and create videos from any text. Usually, the user writes a script with variables, say “Hi $name, …..” and then it can be uploaded as a CSV file with a name and other such variables. Thus millions of personalised videos can be created with values of the merge tags that are being uploaded from the CSV files.

This helps the client companies to perform personalised sales as well as marketing prospects, thus increasing the NPS scores by increasing customer satisfaction. Also, with a different version of the product, Rephrase.ai helped companies to create content videos, learning and ed-tech videos, among others.

How Is It Different From Other Products In The Market

To this question, Malhotra explained, “We are arguably the only company in the world currently which can help sales and marketing reps send personalised real human videos at the scale of millions!”

He added, “Instead of sending long boring emails sales reps can now send out real human videos scale and nail their sales quotas. The sales reps do not have to record one video after another; instead, they could create one outreach video and send it out to thousands of customers. Each video would be personalised.”

Use Of Emerging Technologies

Rephrase.ai is a deep learning first company, where the entire product is the AI algorithm, unlike AI being an adjacent tool helping some other core functionality. Rephrase.ai uses the latest deep learning techniques and multiple machine learning models in different parts of the pipeline, including a combination of GANs and conventional CNN networks. The company has also added scalability to video creation automation, with which one can now create thousands of personalised videos within minutes for sales prospects.

“At Rephrase.ai, we’ve built an artificial intelligence engine that can consume any piece of text as input and build a professional-quality video of a given person speaking the same input text and we’ve just started into this. The vision of this company is to automate all the ed-tech content, marketing content, and eventually, build a system that takes a Hollywood script as input and automatically renders an entire film as output,” said Malhotra on a concluding note.