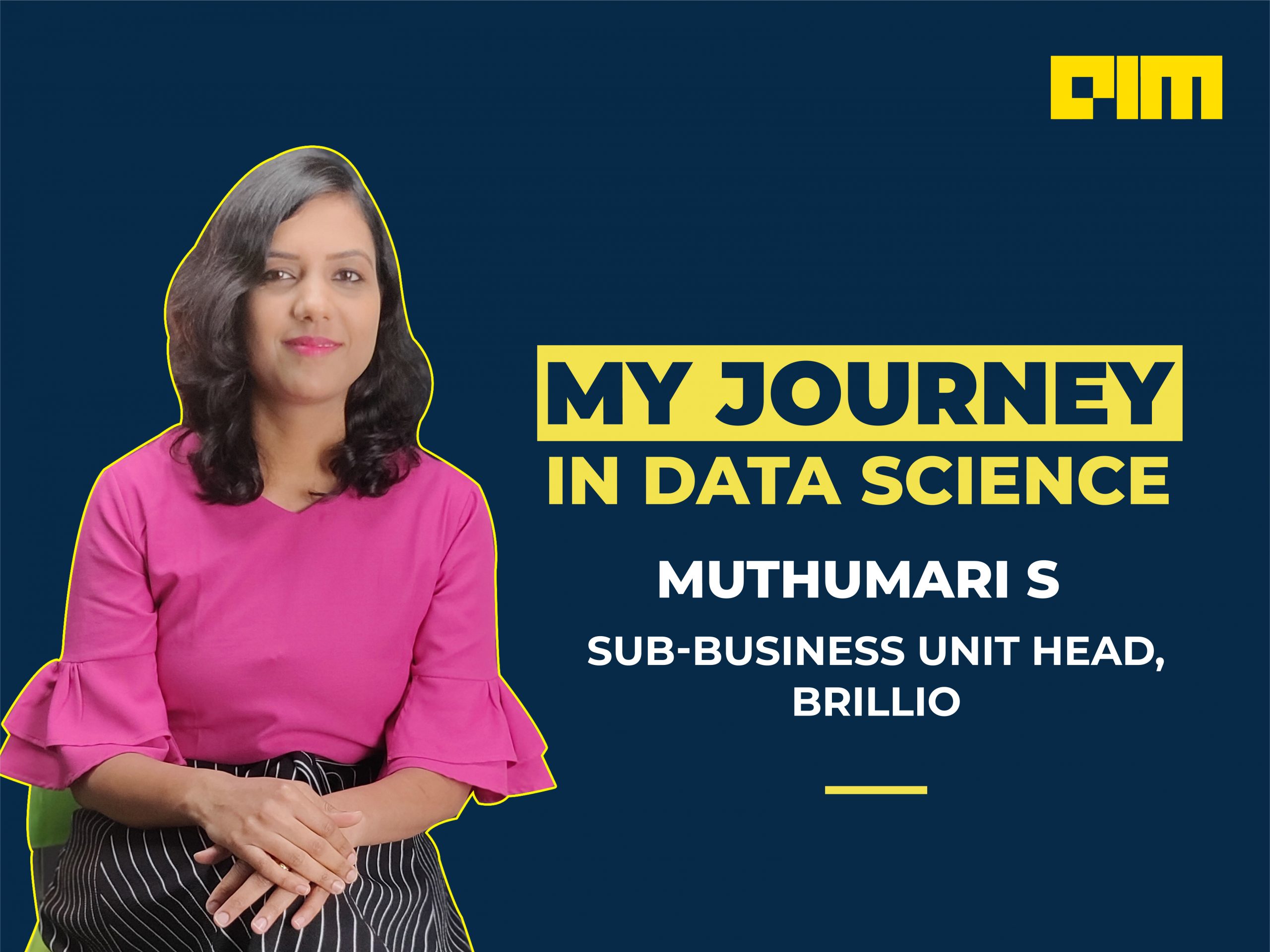 Data scientists, along with enhancing the skills in which they are proficient, should learn new and trending techniques. This not only makes one efficient and productive but also helps one solve emerging and challenging business problems. However, one should not lose sight of the traditional techniques as it sets the foundation for further learning new things. Consequently, one should devise plans effectively to ensure they succeed in the shifting data science landscape.

To understand how data scientists should make new advancements in their career, we bring out the story of prominent data scientists. For this week, we interviewed, Muthumari S, sub-business unit head at Brillio, for our weekly column My Journey In Data Science.

Muthumari pursued electronics and communication engineering from Anna University, which she says has no relevance in her day-to-day activities. However, it helped her in getting started with a career in analytics. “On the other hand, my passion for numbers started early in life, and my natural affinity to draw insights into it pulled me towards data science,” says Muthumari. “I like to make data-driven decisions and solve problems at scale involving unstructured text, image, and machine-generated data,” she added.

Starting her professional career as a business analyst at Mu Sigma after her graduation in 2008, Muthumari learned a lot from internal training in the office. Passionate to learn further, she took a few online courses, read books, and went through materials that were available online.

Although for Muthumari, it was a natural progression to move from analytics to data science, she had to continually educate herself over the years as the data science landscape has drastically changed. “The evolution of the technologies in data science is incomparable, one needs to continuously stay abreast of the trends and adopt different methodologies as and when the techniques expands,” explained Muthumari.

In the last decade, the growth in computational power and higher penetration of smartphones, expectations of the analytics industry is changing. This requires one to perform tasks such as real-time human intelligence using cognitive technologies and big data on a vast scale. Today, the firms have gone past the idea of evaluating based on the ability to perform a specific task. Instead, they are focusing on the efficiency of the task.

Enterprises are trying to automate tasks that require human perceptual skills such as image and video recognition, and text mining that involves analysing, reasoning, and predicting. Organisations, however, struggle to effectively adopt the data-driven culture, complex data governance, data security, and finding the right skills.

“Consequently, one should seek challenges outside their comfort zone to empower themselves and solve real-world business problems. This will not only help organisations streamline their problems but assist them in succeeding in the data science domain,” believes Muthumari.

Muthumari said that she doesn’t shy away from the pressure and new challenges. This has allowed her to make great strides in data science. Being able to handle large client responsibilities and helping them solve ambiguous problems with tangible business impact is what drives Muthumari forward in her career.

Just like any other data scientists, Muthumari has failed on multiple occasions. However, she spoke about the project in which she dedicated ten weeks to get absolutely nothing. Even after arduous efforts, she couldn’t see convincing patterns, therefore failed to identify when to stop iterating. Nevertheless, she has been successful in various projects, and the most notable one is her contribution to the patent of video analytics, where the researchers tried to get insights into unstructured data created by different forms of media devices and digital content.

As a part of her role, Muthumari also hires data scientists, who are technical and functional problem-solvers rather than someone who is keen on just using new algorithms. “As good data scientists, one should be able to understand the data very well, articulate the problems and solutions,” mentions Muthumari.

Muthumari cited a report from Pactera Technologies, which describes that despite the increase in the interest in the adoption of artificial intelligence (AI) in the enterprise, 85% of AI projects ultimately fail to deliver on their intended promises to business. “This is mostly because data scientists fail to focus on identifying the right problems for solving as they don’t spend enough time in assimilating the impact of the models before creating them. Consequently, it leads in wastage of resources and worn-out developers,” explains Muthumari. Finally, she concluded by pinpointing that data scientists should understand the usefulness of the model and eliminate the practice of implementing fancy techniques.

Modernising Data Supply Chains In The Age Of Algorithmic Intelligence

Top 9 Libraries You Can Use In Large-Scale AI Projects