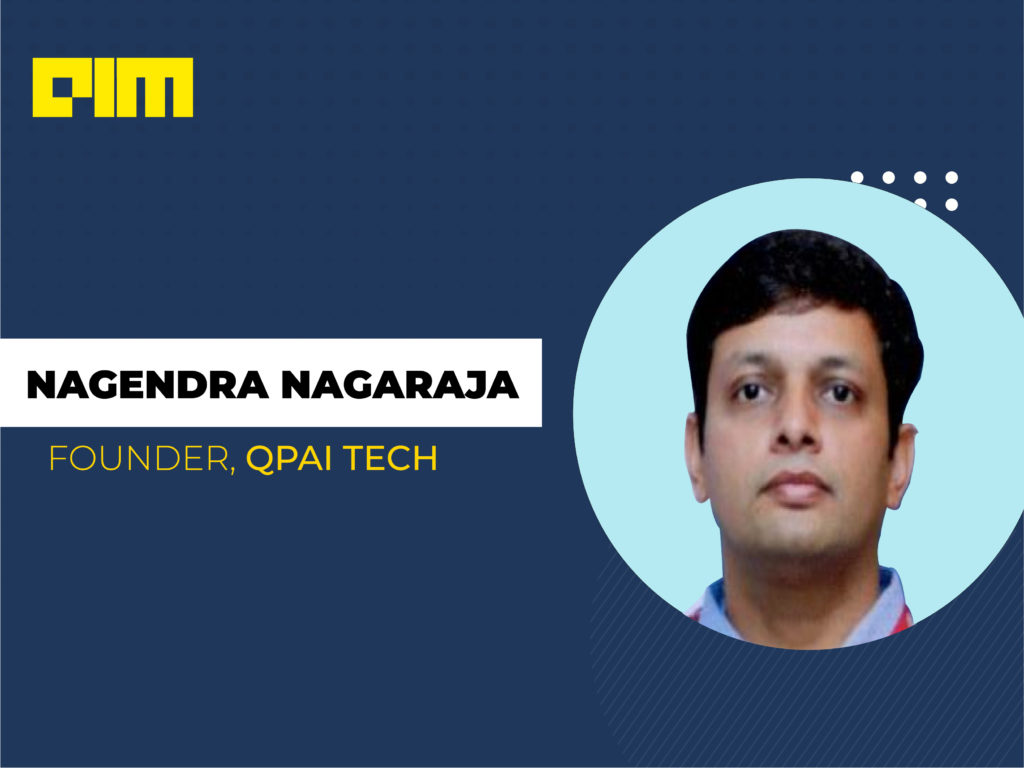 While the field of artificial intelligence has accomplished many developments lately, there are certain challenges it still faces — coming up with the AI/ML models being one of them. “This is probably the biggest debug problem of our lifetime,” says Nagendra Nagaraja, founder of QpiAI Tech, a Bengaluru-based startup that has brought in special optimisation hardware to solve the problem of model complexity.

To find out if the model is over-optimised or if the parameters are properly tuned is one of the biggest challenges that data scientists face. Doing it manually can be cumbersome and one of the natural solutions is to deploy an automated AI/ML model generation, which QpiAI is exploring.

Nagaraja explains the problem as below:

“Slowing down Moore’s law is slowing down the number of transistors we can add on a chip. But model complexity is exploding doubly exponentially. Current GPUs and classical hardware cannot solve this issue, which makes democratising AI/ML a big problem to solve. There is a need to invent new technology to model intelligence with zetabytes of data that is being produced every year.”

This calls for special optimisation hardware which will overcome the shortcomings of the current Quantum computers. “Hybrid classical-Quantum computers are the solution, and we at QpiAI are inventing it in the form of ASGP (AI System Generating Processor),” shares Nagaraja.

QpiAI relies on CMOS-based quantum dots to fabricate hybrid chips which work at Cryogenic temperature and use current semiconductor processes. “Our aim is to put 1 million qubits on a chip to enable the solving of AI/ML model generation problems,” says Nagaraja.

“We also believe that modelling intelligence in future will be a combination of bits, neurons and Qubits, and we are combining these efficiently to enable the future of compute and intelligence modelling,” he added.

QpiAIAims To Revolutionize Computing and Modelling

Nagaraja believes that Quantum computers in the form of their invention ASGP would revolutionize compute. He believes that they would be able to achieve the following benefits with it:

The ambitious startup has been approached by many VCs for funding and has good cash flows currently from AI modelling platforms. As Nagaraja shares, funding will be mainly used in scaling the business and designing a commercial-grade Quantum chip.

How Are Companies Benefiting From QPiAI

On being asked which industries are most likely to benefit from increased efficiency in Quantum compute, he quickly adds that the dark horse will be the manufacturing industry. “We believe that it will result in new ways of manufacturing, that is, top-down, moving away from current bottom-up integration of end goods.

With clients in India and Japan, many manufacturing companies are using their products such as QpiAI-explorer, QpiAI-Pro, QpiAI-enterprise with on-going work on QpiAI-Quantum. “QpiA is all that they need for their AI/ML/Quantum needs,” says Nagaraja.

QpiAI runs on their patented technology to make sure the AI/ML model generation is very accurate and models are simple. Nagaraja shares that it is the only platform which can support Google Cloud, AWS, Azure and local servers for computation needs, providing a tremendous advantage for large enterprises with heterogeneous platforms.

The QpiAI team is accomplishing all of it with a 10 member team. Along with Nagaraja, the startup is guided by Dr Madhusudan Atre who is a semiconductor industry veteran. As Nagaraja says, despite the COVID-19 crisis, hiring is going on briskly for them. “We plan to recruit great talent from Indian universities and hire laterally to innovate and grow our businesses,” he says.

Taking The Way Forward Of Quantum Computing In India

Nagaraja says that with FM announcing Rs 8000 crores for Quantum compute recently, the scenario for the industry looks quite promising. QpiAI is taking the right steps by taking both Quantum platform and hardware deployment a step higher.

“We are at an inflection point of the compute and intelligent modelling technology. Quantum computing is set to grow exponentially which will enable massive computing power soon, which will be the new normal,” says Nagarajan on a concluding note.