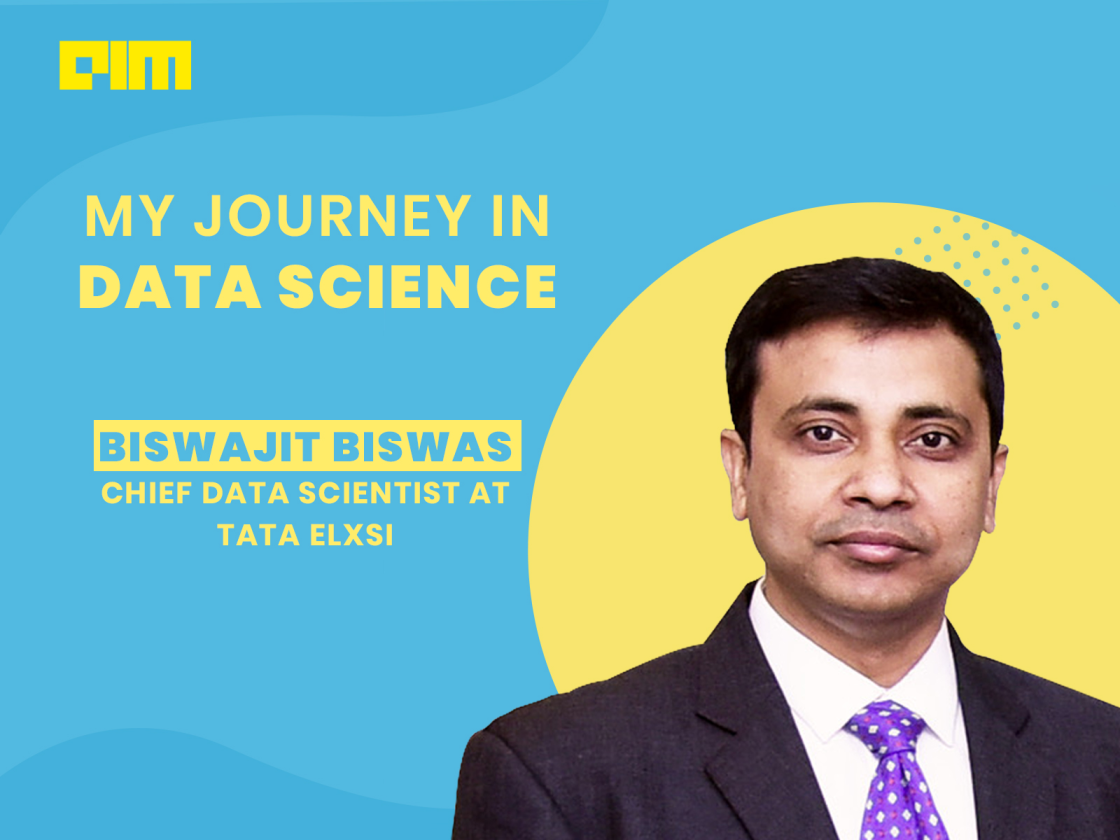 Every week, Analytics India Magazine interviews prominent data scientists to spread their success story with the community. For our weekly column My Journey In Data Science, this week, we got in touch with Biswajit Biswas, chief data scientist at Tata Elxsi.

Biswas pursued mechanical engineering from Jadavpur University in 1993 and did his Masters from BITS Pilani in 2000. However, he gives credit to his father, who used to create exciting puzzles and problem statements, which went beyond the school syllabus, for him to solve. This generated interest in mathematics and allowed Biswas to be competitive in the world when there was a shortage of online resources.

Unlike others, Biswas was fortunate enough to use mathematics professionally in his first job while working for L&T. Before getting into data science, Biswas used to develop statistical tools for computer vision systems to improve its performance, which required in-depth knowledge of statistics, probability, sampling, and estimation. He was also into developing audio-video computing domain and implementing video compression algorithms, bit rate control, acoustics noise separation, and speech coding.

All these disciplines required a strong background in mathematics, and this helped Biswas to remain connected with applied mathematics. “Statistics, linear algebra, and vector calculus are three fundamental domains of mathematics to be mastered for being successful as a Data Scientist,” believes Biswas.

When asked about how difficult or easy it was for him to prepare for the ever-changing data science landscape, Biswas said, unlike popular notion, the fundamentals of data science are not changing as frequently; it is the tools and tech stacks that change. The basics of machine learning have remained the same.

Shallow learning and deep learning have been for quite some time, but what has changed is the tech stacks like Theano, TensorFlow, PyTorch, and others, which have enabled developers to realise the model in a more structured and programmatic way. For decades, deep learning techniques were handcrafted by developers.

“Also, the evolution of GPUs has greatly helped in the advancement of ML and DL computing. So, in a nutshell, yes, there are changes; far better tools and methods have merged, a plethora of pre-trained networks with which we can build a solution quickly. Thereby, the problem has shifted to the data domain and not in the algorithm domain” adds Biswas.

Staying Relevant In The Domain

To stay competitive, Biswas spend at least 2 to 3 hours a day listening to podcasts, audiobooks, as well as reading books to be in touch with what is happening around. Nowadays, information is flooded across channels; which creates a lot of clutter. Hence, cutting out the noise and taking the correct gist has become a challenge.

Biswas also believes that it is nearly impossible to grasp all the methods and concepts in one go; you need to go through them repeatedly. When you go through the tutorials or books for the third or fourth time, you start to understand data science clearer and in a better way.

In his continuous attempt to learn, Biswas also attends conferences, take up speaking opportunities, and interacting with fellow data scientists who also provides many insights into what is happening in the domain.

Biswas follows quite a few people like Andrew Karpathy in the context of CNN and RNN based deep learning, Ian Goodfellow for adversarial networks, and Alex “Sandy” Pentland, a mentor from MIT Data Science program. He also regularly follows Kenneth Cukier, the celebrated data scientist from The Economist and his program named ‘Babbage’ to get the daily dose of science updates.

As a chief data scientist, Biswas heads the team which was incubated in 2015 with just six engineers and is a 100 plus today. In little less than five years, he along with the team built five platforms (in the area of video cognition, conversation engine, log language processing, anomaly detection, and recommendation system), and acquired fifteen customers, delivering solutions that have brought in a revenue of more than 15 million USD.

“I have worked on the most diverse of the AI and ML areas, namely convolution networks, natural language processing, reinforcement learning for robotics sequence mining and finding correlation in various data streams to identify the origin of failure pattern,” says Biswas.

As a part of his job, Biswas also hires data scientists at all levels. He looks for a strong academic background, especially math scores at school and intermediate level. Nowadays, he also looks for certification completion (paid ones), because it means that the applicant is serious about the course and the subject being taught.

Apart from academics and certification, he tries to assimilate analytical ability and at times conduct some logical and aptitude tests. While a programming skill in Python/C++ is a must, when it comes to maths, he expects candidates to be proficient in linear algebra, vector calculus, and statistics/probability.

“Data science is a very volatile domain; many advancements are happening and at a rapid pace. Therefore, one should spend at least an hour in a day, either reading or listening to books, join common interest groups, and see what others are discussing. Keep following communities such as Kaggle, and if you are enthusiastic, participate and see how you score. Meet up with interesting people in Hackathons,” suggests Biswas. “Also, I would like to reiterate that when it comes to data science, it is essential to know linear algebra, vector calculus, and statistics/ probability.