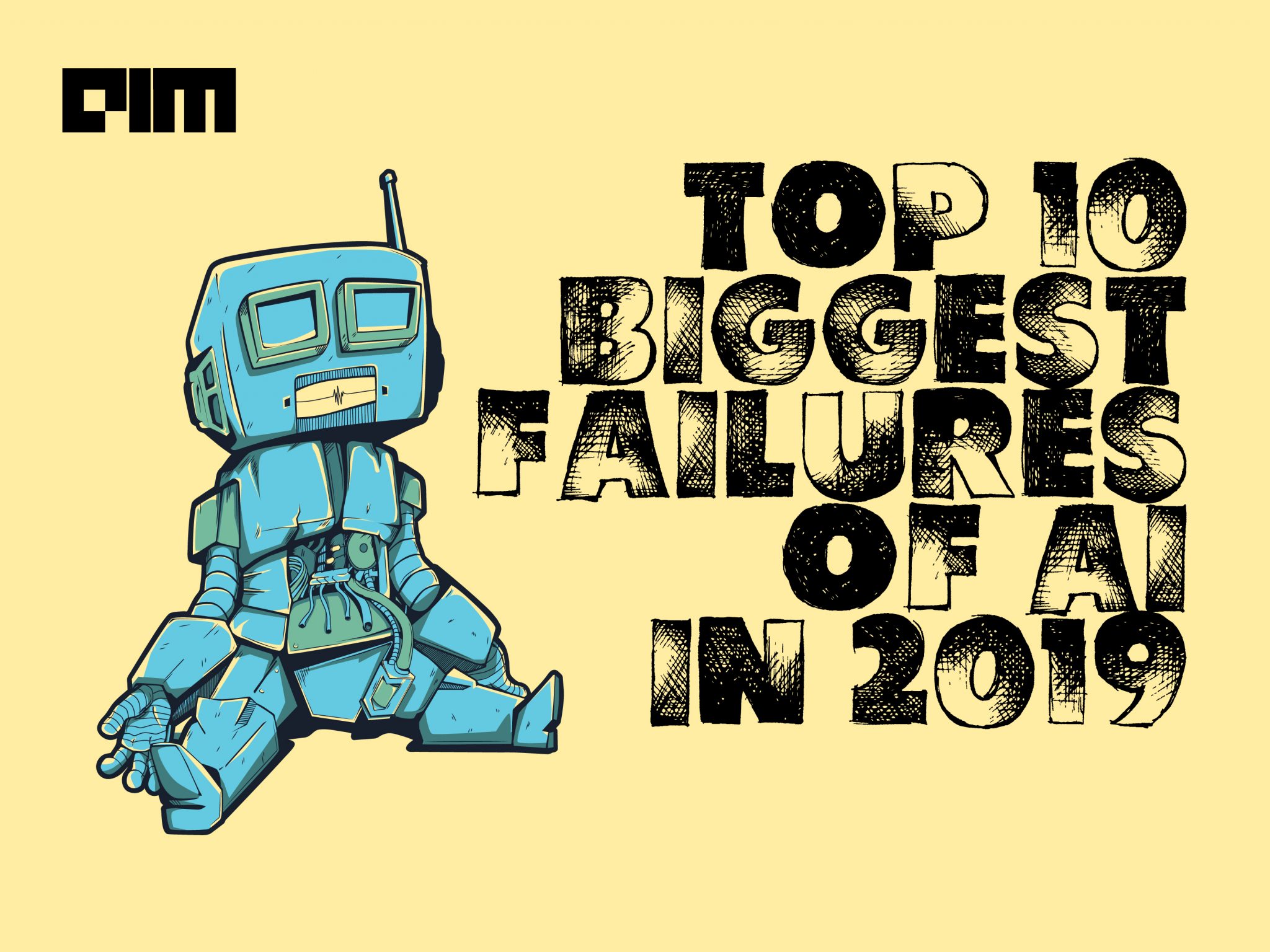 Becoming data-driven and driving the AI-first strategy is the ultimate objective of most companies today as they are gearing towards a digital transformation journey. While the final results are gratifying, the journey of analytics or AI adoption can be slow. As a result, many analytics projects and startups ultimately fail to scale up or stand the test of time.

In the last year, there have been several reports that suggested that a majority of data science projects will face failure. In fact, one report said that 87% of data science projects fail to move past the preliminary stages. Even the startups in the space fail due to reasons such as lack of required skills, unrealistic expectations, lack of funding, issues in data collection and cleaning, and other technical and non-technical issues.

This year we are compiling some of the biggest failures that the industry witnessed in the year 2019. While the year saw many exciting innovations, some startups and projects failed to stand up to the users and investors expectations.

8chan shut down after it led to many criminal cases

What was created as a space for uncensored speech, and for people to post anything anonymously, 8chan turned out to be a haven for extremist and hateful content. After being the centre of controversy for quite some time, the founder said that it is about time to shut down the website as it was not doing any good to the society. Cloudflare, which was providing infrastructural support to the portal such as content delivery and DDoS protection also came under scanner as the controversy heated up, following which it announced that it would stop working with 8chan.

The rise and fall of MapR

MapR Technologies, one of the unicorns in the big data space, announced cutting down 122 jobs and shut down its California headquarters as it failed to secure additional fundings. This Google-backed company, however, later mentioned about finding a potential buyer and said about postponing its shutdown. “We are continuing to engage customers in new opportunities and supporting existing customers and partners globally, and expect to have more news on these developments shortly,” the company stated.

IBM’s Watson for Oncology failed to deliver its promise

The big and ambitious project by IBM that has been running for years was cancelled and called unsafe for treatments and any related recommendations. The project which started as a partnership with the University of Texas MD Anderson Cancer Center to develop a new “Oncology Expert Advisor” system, was aimed at enabling clinicians to generate valuable insights from the cancer patient and research databases. However, it was later found that IBM Watson was making erroneous and dangerous cancer treatment advise. It was concluded that it made such errors as the software was trained on a small number of hypothetical cancer patients, rather than real patient data.

While the social media giant has been quite hopeful of the rapid advances it has made in the artificial intelligence domain, it has still not been able to keep illegal and hate content away from being broadcasted at its platform. Despite making significant advances, the promise of AI seems to be a distant reality. The fact that the company still needs to spend on humans to spot the problems, speaks of that fact that AI has failed to show what it had promised to. Some of the challenges that Facebook faces are finding the right data to train AI algorithms, developing programs that can spot the content of hate speech, among others.

It was a big shocker when the once-hot robotics startup Anki announced that it is shutting down its operations despite raising over $200 million in venture capital. It laid off around 200 employees as the company was struggling to meet its financial needs. Having raised money from investors such as Index Ventures and Andreessen Horowitz it was also anticipating acquisition from companies like Microsoft, Amazon, and Comcast, which failed to materialise.

It was announced in early 2019 that the robot servers are going offline which will hamper most of its functionalities. This social robot succumbed to its numerous limitations and competition from the likes of Alexa. The makers said that the existing robots will continue to respond to the voice command ‘Hey Jibo’ but will not be able to understand other voice commands. It will instead function based on the display buttons on its touch screen display. Jibo was crowdfunded in 2014 when it had raised $3.6 million from backers.

Despite having raised a heft funding amount, the UK-based consumer robotics startup shut down citing the reasons that consumer robotics sector is an inherently challenging space to sustain, especially for startups. It introduced to the world’s first gaming robot with seamless AR integration which was launched across various territories and developed a unique education offering.

Formerly known as CyPhy, this drone startup that used artificial intelligence and machine learning to help analyse data collected by drones abruptly announced to close down. Reportedly it had raised $39 million over seven funding rounds. Its PARC platform (Persistent Aerial Reconnaissance and Communications), a tethered drone provided secure communication and continuous flight to customers. It was rebranded in Jan 2019 to focus more on  AI and ML.

China-based self-driving startup Roadstar.ai shut down its operations despite raising US$128 million funding round led by Wu Capital and state-backed Shenzhen Capital Group. It had provided autonomous driving shuttle service at the 2018 Shanghai World AI Conference and 2018 World Internet Conference in Wuzhen. It was soon surrounded by controversy when there were reports of receiving kickbacks during fundraising, deliberately hiding codes, and putting false data into a government regulatory report.