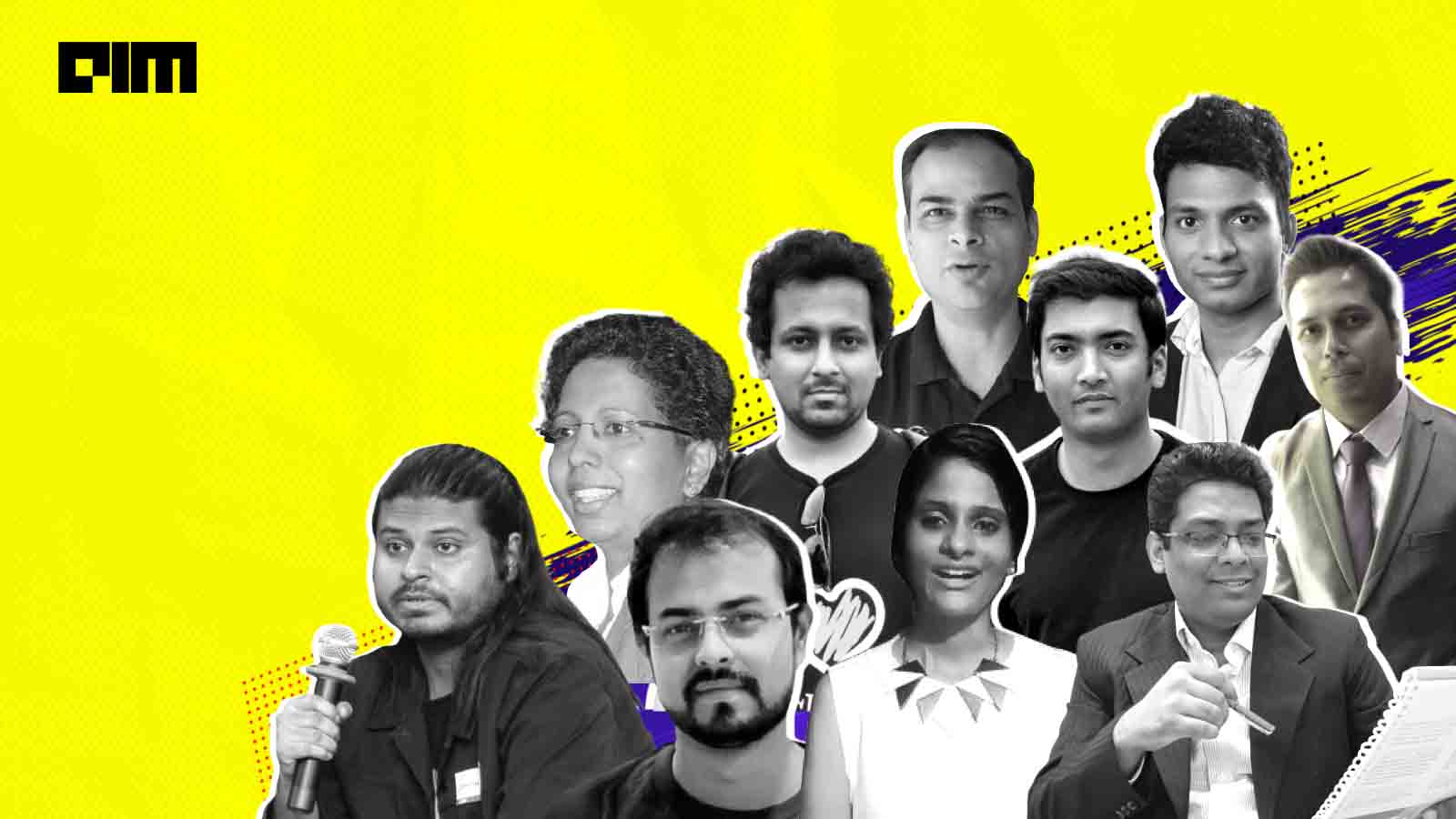 The data science community is growing at a fast pace, and data science units are becoming a crucial part of the organisations across industries. From interpreting large data sets to putting it in use for bringing out business decisions, data scientists are responsible for making data-driven decisions in an organisation. Recognising the data science professionals who have showcased an exceptional journey in the domain, Analytics India Magazine brings out the list of top data scientists each year.

This is the sixth year of the industry-acclaimed list where we have listed top 10 data scientists with diverse backgrounds who have made significant contributions, brought about unique innovations and showcased unparalleled accomplishments in their data science journey.

For the list, we have considered data scientists who are working with organisations or independently, irrespective of the size and nature of work. Also, we do not repeat names from previous years, so, do check earlier years’ inclusions.

This is not a ranking and the data scientists are listed in alphabetical order.

Analytics & Data Science Journey: It was during his master’s degree that he developed an interest in machine learning and data science, and has since led data science teams in various organisations. It was also during this time when he started with Kaggle. He began with industry, went on to do his PhD, dropped out of it after a year and since worked as a data scientist for different industries.

Current Role & Responsibilities: With a focus on applied machine learning and Natural Language Processing, he currently works as a data scientist in Norway.

Significant Achievements: In 2020, Abhishek Thakur became the world’s first quadruple grandmaster on Kaggle. In his free time, he likes to create tutorials on YouTube. Recently, he has also published an applied machine learning book titled “Approaching (Almost) Any Machine Learning Problem”. He has also published a couple of papers in ICML workshop and co-authored two patents while working for industry.

Education: He did his Bachelor’s in Electronics Engineering from NIT Surat and moved to the University of Bonn, Germany for MSc in Computer Science.

Analytics & Data Science Journey: With more than 12 years of experience in using quantitative data analysis with business understanding for enterprise decision-making, he has led data science practice in various organisations. He started his analytics career with ICICI Prudential where he delivered data-driven value for business units such as customer acquisition, customer retention, actuary, underwriting, fraud and claim management.

Education: Aditya holds a Bachelor of Technology in Textile Technology and Minor Degree in Business Management from Indian Institute of Technology (IIT), Delhi.

Analytics & data science journey: Anubhav began his tryst with forecast-led decisioning as an investment analyst, valuing firms. Since then, over the last decade and a half, he has been playing an enabler role in solving enterprise-level quantitative business problems across Europe, the Americas and Asia. A full-stack data scientist, Anubhav has led several offline-to-online data interventions and led breakthrough machine learning solutions within healthcare, manufacturing, finance and media industries.

Current role & responsibilities: Anubhav manages everything data science at Digital Ventures unit of Viacom18, the media powerhouse. By his own admission, he relishes the thrill of working in the B2C technology space where possibilities are limitless and opportunities galore to shape not only the future of efficient business models but also user behaviour at scale.

Significant achievements: Anubhav has been credited with institutionalising data science as a function across various organisations. A believer in minimalistic design, his endeavours include building out usable products such as recommender systems, knowledge graphs and deep spatial systems. Anubhav has also been instrumental in pragmatically creating data privacy and digital protection regimes.

Education: He holds an undergraduate degree in engineering from IIT Kanpur.

Analytics & Data Science Journey: With a strong statistics background, Bishwarup’s affinity for coding helped him transition to the field of data science later on. Bishwarup has worked for companies like Here Technology, Aditya Birla and VMware. Bishwarup’s loves to take on new challenges and learn new things along the way. He also likes to participate in online hackathons in his spare time.

Current Role & Responsibilities: Currently, Bishwarup is Senior Manager in EagleView, a market leader in aerial imagery. He leads the end to end ML effort and developments for one of their major products. His role spans across scoping, data collection and extraction, image processing, ML model development and validation and deployment.

Significant Achievements: A Kaggle grandmaster, Biswarup reached ninth rank worldwide back in 2017 amongst more than 100K active data science participants. On the work front, Biswarup has been working predominantly in the Computer Vision domain building systems that are scalable and sustainable. He believes that there is too much to learn in machine learning for one lifetime, and it’s not practical to aspire to be good at everything.

Education: Bishwarup did graduation in Statistics and passed out of the University of Calcutta in 2008.

Significant Achievements: Dipanjan has received numerous accolades in his professional career for showcasing exemplary commitment and delivering business value such as recognition by Google as a Google Developer Expert in Machine Learning. He has been involved in building data science teams from scratch and setting up an analytics centre of excellence at his previous organisations. He has published over seven books in machine learning, deep learning, transfer learning, NLP along with several papers and articles. He has open-sourced most of his analyses and ranks among the top 1.1K most-followed people on GitHub.

Education: Dipanjan has a Master of Technology degree from IIIT Bangalore, with a focus on software engineering and data science. Besides this, he has several executive education certifications, including the most recent one on AI Strategy from Northwestern University – Kellogg School of Management. He is also pursuing a Post Graduate Diploma in ML & AI from Columbia University, with an intent to stay abreast in an ever-changing landscape of new-age technologies.

Analytics & Data Science Journey: Ratnakar Pandey (RP) has close to 18 years of experience in the field of AI and Data Science. Epitomising the spirit of lifelong learning, he has been one of the early adopters of new ideas and innovations in the data science domain. He has held senior leadership positions in companies such as Kabbage, Citigroup, Target and Texas Instruments where he has been instrumental in driving ML initiatives to create multi-million dollar impact.

Current Role & Responsibilities: Currently, he is leading ML and Analytics for Customer Service at Amazon where his focus areas include Natural Language Processing and Understanding (NLP/NLU),  Automatic Speech Recognition (ASR), Bots Optimisation, Vernacular Products Development using unstructured data such as text and speech from India and other geographies.

Significant Achievements: For his strong contribution in the field, he has been recognised with several awards such as Analytics100, Leader in Action, Outstanding Revenue Impact, Project Excellence Award. RP is also an Analytics Evangelist and spends any free time in writing articles for well-known publications. He has also presented papers globally and spends time with the students both in the classroom and online formats to develop and nurture talent for the industry.

Education: He has an MBA from ISB Hyderabad, MS from the University of Arkansas and BTech from HBTI Kanpur.

Analytics & Data Science Journey: Sheela’s passion for data science started during her engineering days observing the applications and value it can add to the domain. A dedicated and loyal student of data science, she has over 14 years of industrial journey. Sheela has worked as a Senior Research Scientist and Scientist at the Research Centers of Infosys and General Motors, respectively.

Current Role & Responsibilities: Dr Sheela is the Chief Advisor for the Data Science Program at Bosch where she guides the unit with technical solutions, business trend, consultation, recruitment, etc. Her practical, robust data science solutions have been a success for many of Bosch customers, addressing business problems in domains like Industry 4.0, healthcare, energy, manufacturing, smart city, etc.

Significant Achievements: She is the Associate Editor for Inderscience – International Journal of Big Data Management journal. Apart from this, she is the advisory board member for Data Science program at multiple institutes like RVCE, Bangalore; PSG Institute of Technology, Coimbatore; SSN Institute, Chennai; Jain University, Bengaluru and more. She has filed three patents and has more than 25 International journal and conferences publications to her credit. Apart from being invited speakers in various conferences she is a member of various societies like CII, NASSCOM and more.

Education: Sheela has a PhD (2006) from University of Texas at Arlington, USA, in the discipline of Industrial Engineering with a major in Machine Learning and Optimisation, and MS (2002) from the same University. She received Engineering (2000) from RVCE, Bengaluru.

Analytics & Data Science Journey: With over a decade of experience in data and analytics, his current focus is around AIOps for building the next-gen IT infrastructure. His definition of a good data scientist is one who can “think as a scientist, code as a developer, and sell as a salesman”. He has been a part of the data science team at TCS which has built India’s largest Banking Data Warehouse for SBI processing over 50TBs daily data volume.

Current Role & Responsibilities: Sonny is the Director – Principal Data Scientist at Microland and heads the engineering of Microland’s AIOps platform. A typical day for him starts with solving a Sudoku puzzle, reading the latest tweets around AI and Data Science, followed by a series of engineering discussions around new ways to solve previous problems and a series of “parallel POCs”. One of his primary responsibilities is to design “AI Platform at Scale” apart from setting up Kubernetes Clusters, running federated Xgboost and doing feature engineering at scale.

Significant Achievements: Sonny has been one of the few data scientists in India who are serving leadership roles and at the same time can be seen competing at hackathons. He has been a serial hackathon winner of over 20+ hackathons conducted by Kaggle, Techgig and others. He is an AWS Architect and has designed and implemented solutions to solve Hybrid Data Center problems around Cost optimisation, Anomaly Detection and Recommendation Engines.

Analytics & Data Science Journey: Suvadip has more than 12 years of experience in developing innovative data-driven solutions for business problems. He has vast experience in the banking and financial services industry having worked across multiple roles including leadership, project management and business consulting across all geographies.

Significant Achievements: Suvadip has built and led a strong team of data scientists, building advanced analytical solutions for the bank’s growth initiatives, driving the unit’s innovation agenda. His work has had a strong focus on commercialisation and creating new assets through applied research, driving collaboration across engineering and MLOps to build end-to-end data products and solutions.

Education: He has a Master’s in economics from Delhi School of Economics, Certified SAFe Agilist, Chartered Data Scientist (CDS).

Analytics & Data Science Journey: Usha is a polymath and has strong domain knowledge across multiple domains like quantitative finance, marketing and genomics to name a few. She specializes in probabilistic graphical models and has built bayesian networks-based algorithmic trading systems. She has worked with interesting machine learning use cases across multiple industries like telecommunication, semiconductors, manufacturing and cybersecurity.

Significant Achievements: Usha is India’s first women Kaggle Grandmaster and has organised NeuroAI which is India’s first-ever research symposium in the interface of neuroscience and data science. She has prepared curriculum for BITS Pilani’s online masters in Data Science program (consumed by 20,000+ students ) and Upgrad’s PGP program in DS (consumed by 10,000+ students). Apart from conducting several corporate workshops and Faculty development programs for premier institutions in India, she is also invited speaker at multiple conferences.