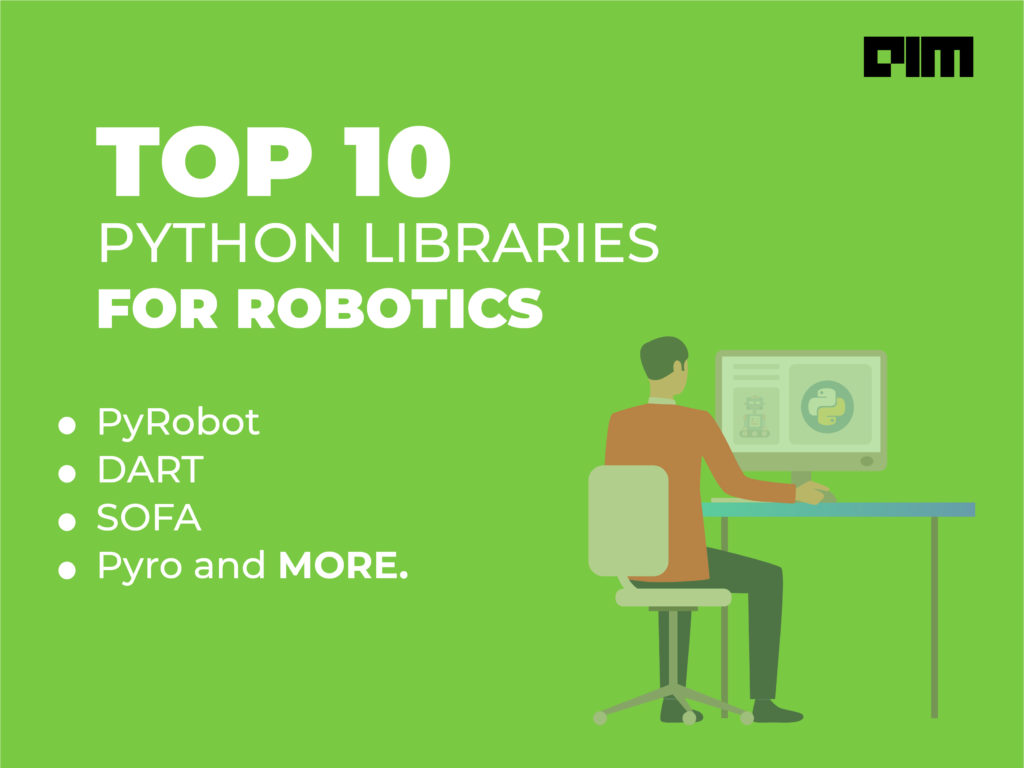 One of the most popular languages, Python, is extensively used by emerging tech developers as well as robotics researchers. In robotics, the language has become a key part of the robot operating system (ROS) and is used for designing the embedded systems. For instance, the embedded systems and exhaustive automation packages of Raspberry Pi and Arduino are designed using this language.

In this article, we list down the top 10 Python libraries for Robotics.

(The libraries are listed according to their GitHub Stars)

About: Python Remote Objects – or Pyro – is a library that enables you to build applications in which objects can talk to each other over the network, with minimal programming effort. Written in Python, this toolbox works between different system architectures and operating systems. It provides a set of powerful features that enables you to build distributed applications rapidly and effortlessly.

About: Dynamic Animation and Robotics Toolkit – or DART – is a collaborative, cross-platform, open-source library that provides data structures and algorithms for kinematic and dynamic applications in robotics and computer animation. The library is distinguished by its accuracy and stability due to its use of generalised coordinates to represent articulated rigid body systems and Featherstone’s Articulated Body Algorithm to compute the dynamics of motion.

DART also provides efficient computation of Jacobian matrices for arbitrary body points and coordinate frames. The library was created by the Graphics Lab and Humanoid Robotics Lab at Georgia Institute of Technology with ongoing contributions from the Personal Robotics Lab at the University of Washington and Open Source Robotics Foundation.

About: PyRobot is a Python library for benchmarking and running experiments in robot learning. It is a combination of two popular Python libraries, i.e. Requests and BeautifulSoup.  It can be used to drive applications that don’t provide an API or any way of hooking into them programmatically. This library will allow you to run robots without having to deal with the robot specific software along with enabling better comparisons.

About: Python Dynamics or PyDy is a tool kit written in the Python programming language that utilises an array of scientific programs to enable the study of multibody dynamics. The toolkit helps a user to perform visualisation, model specification, simulation, benchmarking, among others in their workflows.

About: Simulation Open Framework Architecture or SOFA is an open-source library and an efficient framework dedicated to research, prototyping and development of physics-based simulations. The library primarily focuses on real-time simulation, with an emphasis on medical simulation.

The advanced software architecture of this framework allows the creation of complex and evolving simulations by combining new algorithms with existing algorithms, synthesis of complex models from simpler ones using a scene-graph description, among others.

Some of the features of this tool are-

About: Pybotics is an open-source Python toolbox for robot kinematics and calibration. The toolbox was mainly designed to provide a simple, clear, and concise interface to quickly simulate and evaluate common robot concepts, such as kinematics, dynamics, trajectory generations, and calibration.

About: iDynTree is a library of robot dynamics algorithms for control, estimation and simulation. The library is written in C++ language and supports several other languages including Python, MATLAB, among others. To use the library in Python language, you need to add the PYTHONPATH environment variable to the install path of the iDynTree.py file.