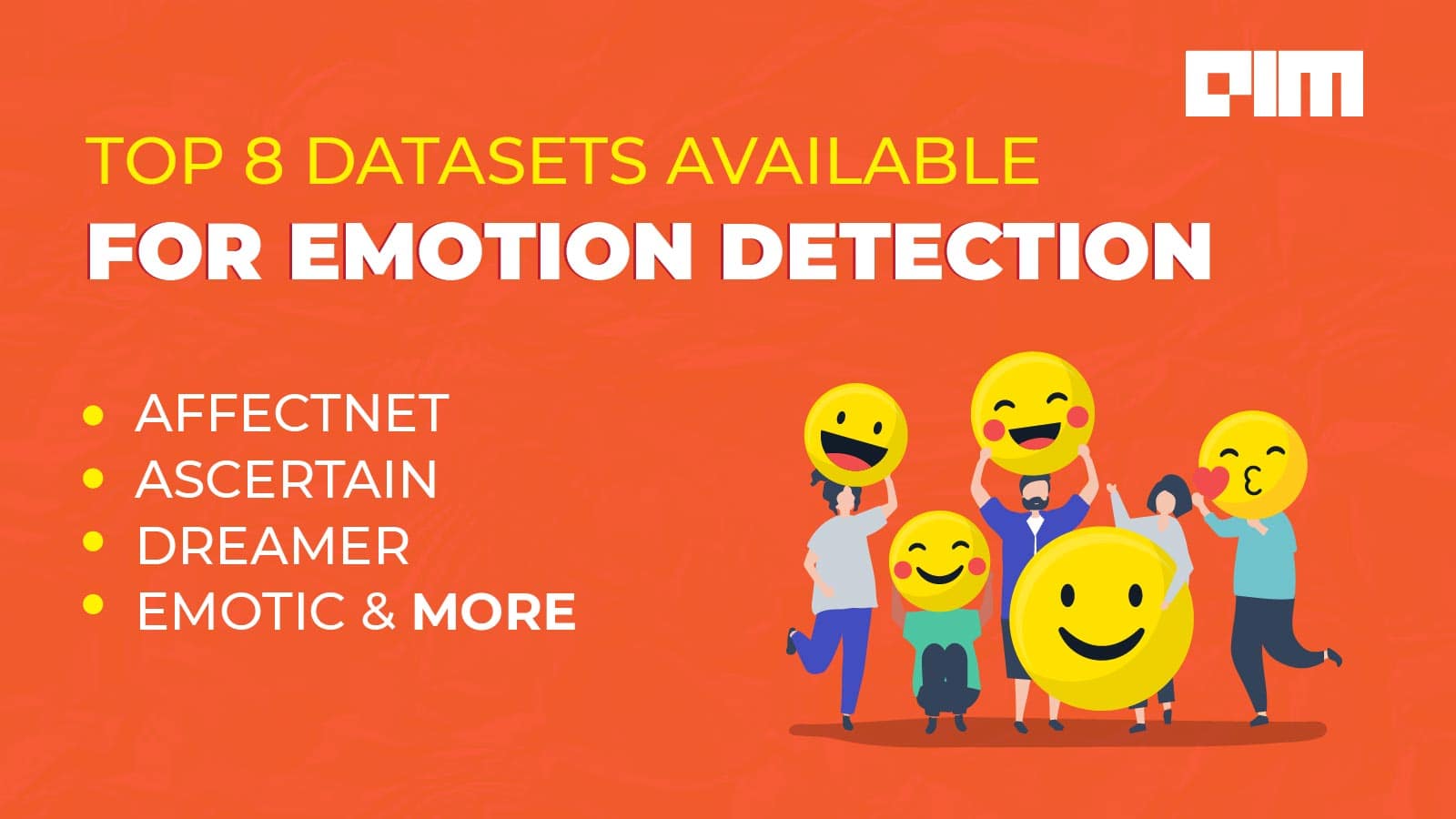 Emotion detection enables machines to detect various emotions. The technique that helps machines and computers to be capable of detecting, expressing and understanding emotions is known as emotional intelligence. In order to understand and detect emotions, the first and foremost requirement for machine learning models is the availability of a dataset.

Below here, we are listing down top eight datasets, in no particular order, that are available for emotion detection.

AffectNet is one of the largest datasets for facial affect in still images which covers both categorical and dimensional models. The dataset is collected by using 1250 emotion-related tags in six different languages, that are English, German, Spanish, Portuguese, Arabic, and Farsi. The dataset contains more than one million images with faces and extracted facial landmark points.

Dreamer is a multi-modal database consisting of electroencephalogram (EEG) and electrocardiogram (ECG) signals recorded during affect elicitation by means of audio-visual stimuli. In this dataset, signals from 23 participants were recorded along with the participants’ self-assessment of their affective state after each stimulus, in terms of valence, arousal, and dominance.

The Extended Cohn-Kanade Dataset (CK+) is a public benchmark dataset for action units and emotion recognition. The dataset comprises a total of 5,876 labelled images of 123 individuals, where the sequences range from neutral to peak expression. Images in the CK+ dataset are all posed with similar backgrounds, mostly grayscale, and 640×490 pixels.

EMOTIC or EMOTIon recognition in Context is a database of images with people in real environments, annotated with their apparent emotions. The EMOTIC dataset combines two different types of emotion representation, that includes a set of 26 discrete categories, and the continuous dimensions valence, arousal, and dominance. The dataset contains 23, 571 images and 34, 320 annotated people. In fact, some of the images were manually collected from the internet using the Google search engine.

The FER-2013 dataset consists of 28,000 labelled images in the training set, 3,500 labelled images in the development set, and 3,500 images in the test set. The dataset was created by gathering the results of a Google image search of each emotion and synonyms of the emotions. Each image in FER-2013 is labelled as one of seven emotions, such as happy, sad, angry, afraid, surprise, disgust, and neutral, with happy being the most prevalent emotion, providing a baseline for random guessing of 24.4%.

K-EmoCon is a multimodal dataset acquired from 32 subjects participating in 16 paired debates on a social issue. The dataset consists of physiological sensor data collected with three off-the-shelf wearable devices, audiovisual footage of participants during the debate, and continuous emotion annotations.