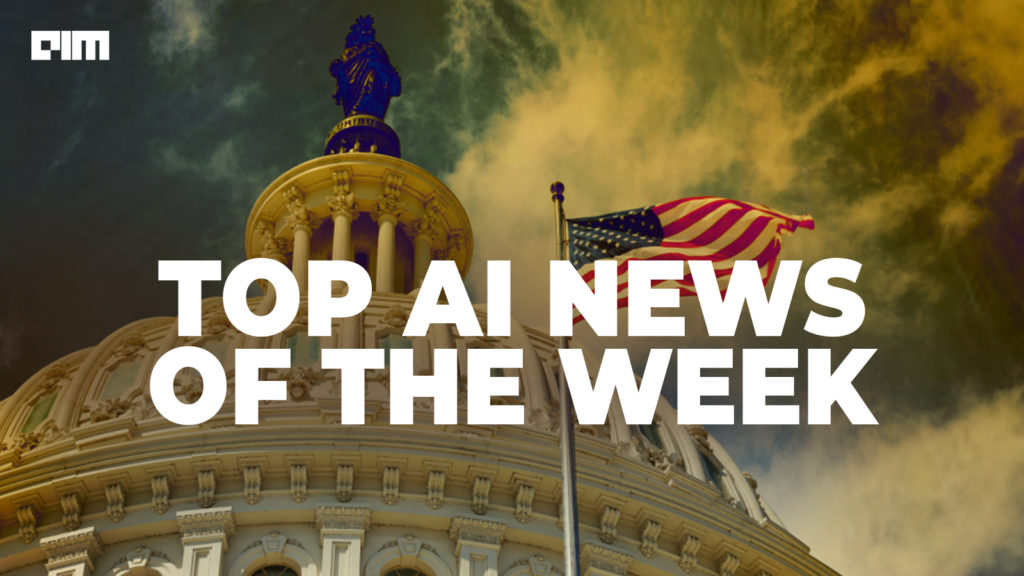 Unlike previous weeks, this time, there are a couple of mega announcements from India as well. There was also a landmark bill by the US that will change the future of AI. Know more about top happenings from this week.

Reliance Industries Limited and Jio Platforms announced that Intel Capital will invest ₹ 1,894.50 crores ($250 million) in Jio Platforms at an equity value of ₹ 4.91 lakh crore and an enterprise value of ₹ 5.16 lakh crore. Intel Capital joins the list of marquee firms that have recently invested in Jio Platforms, taking the total investment amount to ₹ 117,588.45 crores. Facebook earlier announced its plans to invest in Jio, and now with Intel, Jio has bagged another major US collaboration.

“We are excited to work together with Intel to advance India’s capabilities in cutting-edge technologies that will empower all sectors of our economy and improve the quality of life of 1.3 billion Indians.”

Intel Capital is known for its investments in disruptive technology areas like cloud computing, artificial intelligence and 5G, and this investment clearly tells that they consider Jio to be a disruptive force of the future. Read the press release here.

The Indian Institute of Technology Madras (IIT Madras) announced the launch of India’s first online B.Sc. degree in Programming and Data Science. The programme is open to anyone who has passed Class XII, with English and Maths at the Class X level and enrolled in any on-campus UG course.

The students can access 4 weeks of the course content that consists of Mathematics, English, Statistics and Computational Thinking. The students will have to leverage the course lectures online to submit online assignments. This will be followed by an in-person qualifier exam at the end of 4 weeks. The interested candidates will have to pay a nominal fee of Rs. 3,000 for the qualifier exam. Read more here.

The policymakers of the US have introduced a new bill that will ensure deep learning is affordable for all.

The National AI Research Resource Task Force Act was introduced in the House by Representatives Anna G. Eshoo (D-CA) and her colleagues. This bill was met with unanimous support from the top universities and companies, which are engaged in artificial intelligence (AI) research. Some of the well-known supporters include Stanford University, Princeton University, UCLA, Carnegie Mellon University, Johns Hopkins University, OpenAI, Mozilla, Google, Amazon Web Services, Microsoft, IBM and NVIDIA amongst others. Read more here.

Popular Image Dataset Is No More

“It has been taken offline, and it will not be put back online. We ask the community to refrain from using it in future.”

MIT has withdrawn the 80 million images large dataset — Tiny Images for containing some derogatory terms as categories and offensive images. Created in 2006, the dataset contains 53,464 different nouns, which are directly copied from Wordnet. Those terms were then used to automatically download images of the corresponding noun from Internet search engines (using the available filters) to collect the 80 million images (at tiny 32×32 resolution, excluding the original high-res versions).

In a statement released by MIT, it said the dataset is too large (80 million images), and the images are so small (32 x 32 pixels) that it can be difficult for people to visually recognize its content. Therefore, manual inspection, even if feasible, will not guarantee that offensive images can be completely removed. Therefore, they have decided to formally withdraw the dataset.

This decision comes amidst the ongoing debate about the role of bias in the ML community ever since the release of the depixelating image model. Read more here.

Amazon CodeGuru is a developer tool powered by machine learning that provides intelligent recommendations for improving code quality and identifying applications’ most expensive lines of code. Integrate Amazon CodeGuru into your existing software development workflow for experiencing built-in code reviews to detect and optimize the expensive lines of code to reduce costs.

ACM Urges The US To Stop Using Facial Recognition Tech

According to a technology news portal, the Association for Computing Machinery (ACM) tech policy group has asked lawmakers to immediately suspend use of facial recognition, citing documented ethnic, racial, and gender bias. According to the letter released by ACM, it stated that the U.S. Technology Policy Committee (USPTC) had assessed the present state of facial recognition (FR) technology as applied by the government and the private sector.

“FR technology is not sufficiently mature and reliable to be safely and fairly utilized.”

The letter urged for an immediate suspension of the current and future private and governmental use of FR technologies in all circumstances known or reasonably foreseeable to be prejudicial to established human and legal rights. Read more here.