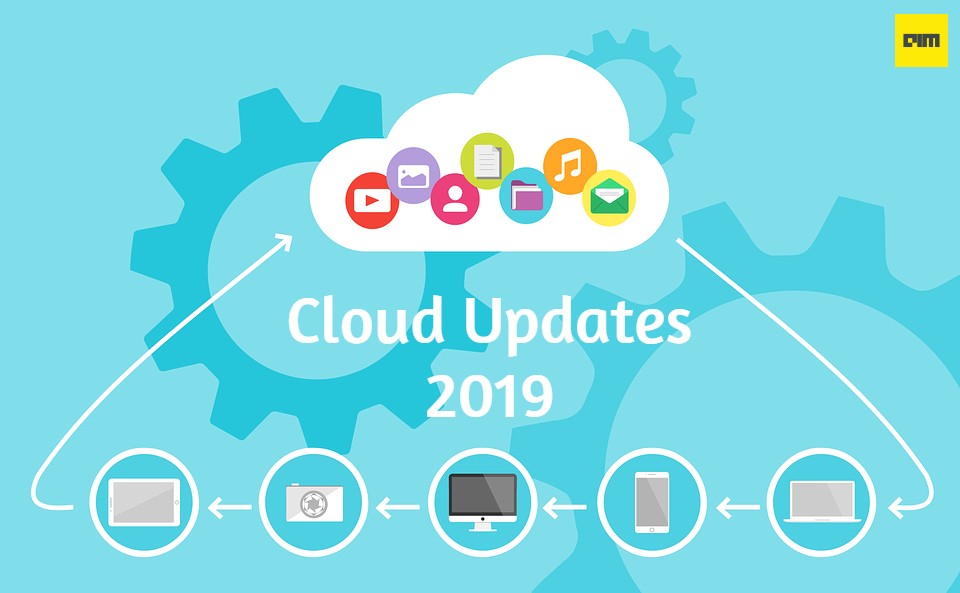 Cloud technology and cloud computing has been helping enterprises streamline their businesses for a while now. Whether it be data management, data storage or data processing, everything can be swiftly handled nowadays, thanks to the cloud. Hybrid cloud engagements are also becoming more popular over the last few years for faster and better results in applications.

In this article, we are listing down 5 companies who announced significant updates on the cloud services in 2019.

This year Amazon brought a number of updates into its cloud platform. Recently, at the AWS re:Invent, the developers at Amazon announced a number of updates to the AWS. Most of the updates this year were into the enhancement of analytics and machine learning services such as contact lens, code guru, fraud detector, Kendra, deepcomposer and much more.

The year 2019 saw the sales for AWS rising to $7.7 billion from $5.44 billion in 2018, beating the $7.69 billion average analyst estimate. In total, this year AWS announced updates on 77 products, features and services which include database, security, identity and compliance, machine learning, networking and content delivery, storage and others.

Google Cloud Platform (GCP) has been striving hard to build a simple, serverless data analytics platform that offers any user the ability to perform real-time and predictive analytics on any data without breaking the bank. This year the cloud platform launched more than 100 new capabilities for smart analytics. The tech giant joined hands with a number of firms this year in order to gear up its security integrations in its cloud.

Anthos was also one of the main releases at the conference. Anthos is basically a rebranded version of Google Cloud. It is a modern application management platform that provides a consistent development and operations experience for cloud and on-prem environments.

GCP joined hands with Teradata to update BigQuery UI for faster data management, updated migration of data warehouse. There were three major areas of data warehousing, they are seamless modernisation, ease of use and intelligent insights which have been mainly focussed. Besides this, there are other updates such as new geo features, new Dataproc security options, updates on cloud storage connector for Hadoop, automatic re-clustering, Datproc on Kubernetes, quantum metric, streaming SQL in dataflow, cloud data fusion, updates for easier transformations of BQML and much more.

The IBM Cloud platform scales and supports both small development teams and organisations and large enterprise businesses globally. The platform is composed of multiple components which work together to provide a consistent and dependable cloud experience such as a robust console, identity and access management console, cloud offering and much more.

This year, there are a number of updates which have been released for a better experience in this platform. The updates include disabling public access to resources, delete any resource group that doesn’t contain any resources, apply promo codes to your account and services, download access reports for specific resources, centrally manage billing and usage for multiple accounts by creating an IBM Cloud enterprise, custom dashboard, export usage data with associated tags and much more.

Recently, the big blue launched open technology to speed response to cyber threats across clouds known as Cloud Pak for Security. This platform is extensible and it can search and translate security data from a variety of sources, bringing together critical security insights from across a company’s multi-cloud IT environment. The capabilities of Cloud Pak for Security include connecting security openly, gain security insights without moving data and respond to security incidents with automation.

In an interview with the National Technology Officer & Head of Strategy at Microsoft India, Dr. Rohini Srivathsa, Srivathsa talked about Microsoft’s vision of empowering developers, organisations and society towards fulfilling the promise of holistic growth. She also claimed that 95 percent of Fortune 500 customers are currently running on the Microsoft Azure Cloud.

At the recent Ignite conference, the tech giant announced a number of updattes on the cloud from which Azure Synapse Analytics was the most popular one. Microsoft Synapse Analytics promises to bridge between data warehouse and data lakes in a single experience and improve the BI and machine learning capabilities.

This platform is basically the next evolution phase of Azure SQL Data Warehouse which integrates Power BI and Azure Machine Learning. Also, this year, tech giant joined hands with Reliance Jio and announced a 10-year commitment which aims to enhance the adoption of leading technologies like data analytics, AI, cognitive services, blockchain, Internet of Things, and edge computing among small and medium enterprises.

This year has indeed been great for VMWare! The publicly traded software company has been recognised as a leader in November 2019 Gartner Magic Quadrant for Hyperconverged Infrastructure. The company has been doing a number of updates on its cloud platform which includes delivering container-ready infrastructure through its new Cloud Native Storage (CNS) to support agile, next-gen application development and enhancements to management for consistent operations across hybrid clouds.

Also, at the recent AWS re:Invent conference, VMWare announced its beta version of VMWare Cloud on AWS Outposts. The key used cases of this version include local cloud use, data center modernisation, and flexible capacity. However, currently, the beta program will be open to a set of customers in the US region.

The giant has also been embracing Kubernetes containers and has been doing updates in its cloud projects. In August, it announced Project Pacific which is a re-architecture of vSphere with Kubernetes as its control plane. Project Pacific looks like a Kubernetes cluster where they can use Kubernetes declarative syntax to manage cloud resources like virtual machines, disks and network It will enable enterprises to accelerate the development and operation of modern apps on VMware vSphere while continuing to take advantage of existing investments in technology, tools, and skill sets.