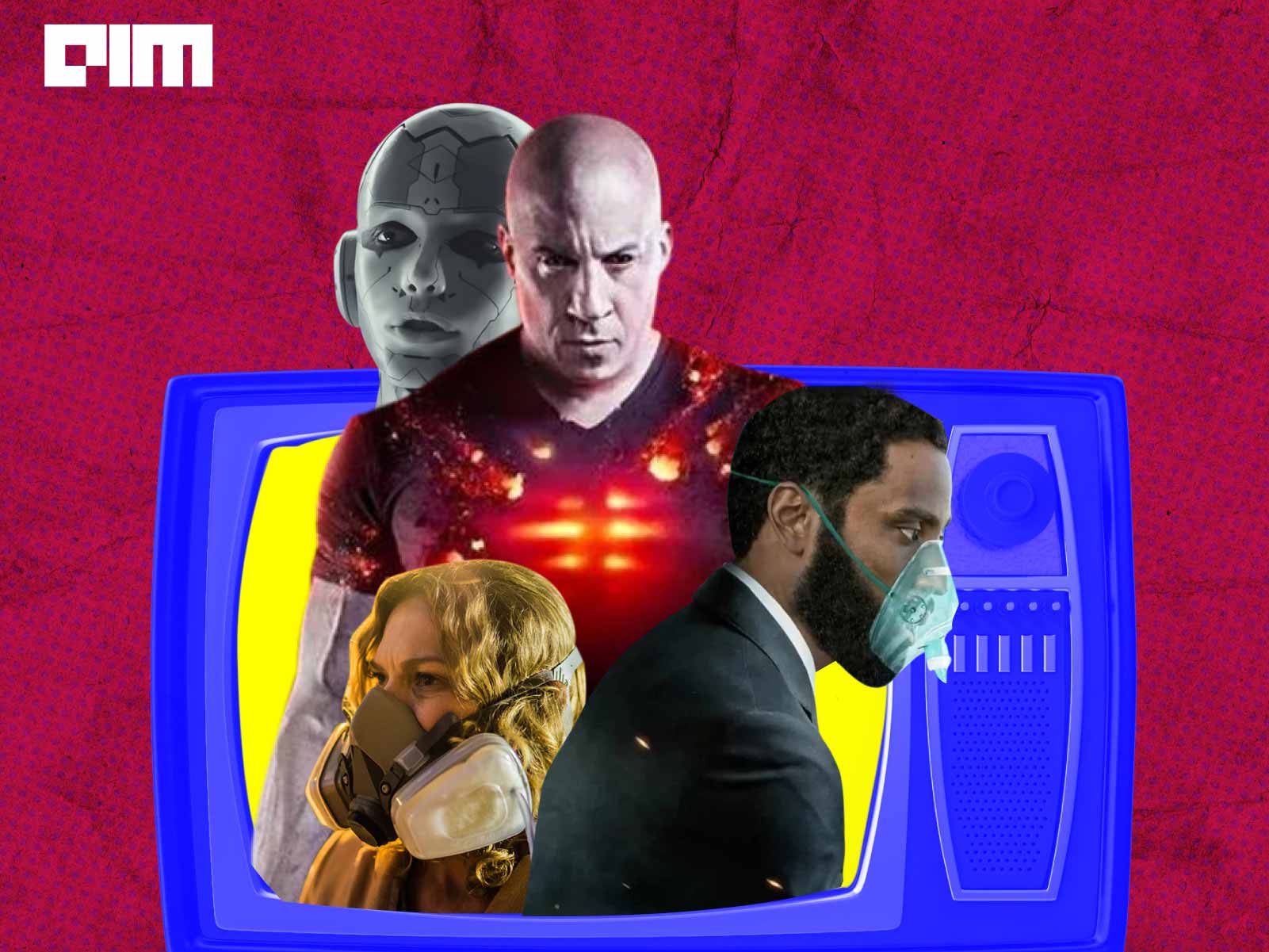 Reel imitates real — this adage has proven to be accurate time and again. As the world progresses to extraordinary advancements in technology such as AI and IoT, movies sincerely try to keep up. This explains the massive popularity of the sci-fi genre, which has found great flavour among movie aficionado. Even as the whole world was down with a pandemic, movies reached their audience across various platforms. This article lists some of the most prominent AI movies that depicted the technology in multiple ways.

Tenet was the most anticipated movie of the year 2020. It also marked the rare distinction of being among the few movies that were screened at cinema theatres this year. The Christopher Nolan-directed movie was touted as his most expensive venture, amounting to $225 million in total cost incurred for the making. This multi-starrer movie features some of the most well-known names including John David Washington, Robert Pattinson, Elizabeth Debicki, Dimple Kapadia, Michael Caine, and Kenneth Branagh. The movie is basically a sci-fi thriller flick where a secret agent, played by Washington, undertakes an international mission to prevent the world’s destruction.

The story explores the concept of inverted entropy that causes a person to move backwards in time. The movie has played around concepts of physics, often leaving audiences dazzled. There are a lot of futuristic devices that have been showcased in the movie, including a dead man’s switch which can trigger world destruction with algorithms.

Starring Emmy awardee Melissa McCarthy in the lead role, Superintelligence is a romantic action-comedy. McCarthy plays the role of a former corporate executive who is not satisfied with her job. One fine day she discovers that she can communicate with her artificial intelligence-based home network system. Incidentally, the AI system assumes James Coden’s voice, lead protagonist’s favourite celebrity.

The AI helps her pay off student loans, pump her bank account up, and fund a billion social cause-based foundation for McCarthy’s character. It even helps her reunite with a former love interest. However, in return, the AI wants her to be the subject of its experiment to learn more about humanity. The movie received moderate reviews, mainly because of its inability to bring forth the risk associated with AI taking control of the world.

As the name suggests, it is a futuristic movie set in 2067. Life from the face earth is wiped out except from one city in Australia which is barely holding up thanks to synthetic products produced by an organisation called Chronicorp. All is well until a new deadly disease starts affecting people, including lead protagonist Ethan Whyte’s wife, called The Sickness.

A signal from 407 years away in the future is received by the Chronicorp scientists asking to specifically send Ethan to prevent the destruction of humanity, whatever is left. Ethan then sets out to time travel with just an AI-hand computer permanently fitted in his hand. The rest of the movie follows the theme of how Ethan saves humankind from complete extinction.

This movie is set in 2038 and revolves around lead character George Almore, a scientist, and his pursuit to build an advanced humanoid robot modelled on his dead wife. He creates three prototypes — JI, J2, and J3. While the first two are more mechanical and boxy in build and have a toddler and an adolescent’s mental capacity, his third creation is closest to a human. The movie goes on to then explore the complexities of a human-AI relationship.

Visually appealing, reviewers say that the movie may remind viewers a bit of Ex‑Machina, Ghost in the Shell, and Cyberpunk. It was received with mostly positive reviews.

This Vin Diesel-starrer is about a vengeful soldier who is out to seek revenge for his wife’s murder, but with a twist. Vin Diesel and wife’s character are both shown murdered; however, the former is resurrected by an intelligence company that injects nanotech/bots in his bloodstream, giving him superhuman strengths.

Based on a Valiant Comics character, the original version of Bloodshot was aired in 1993 when sci-fi crime-fighting cyborg soldier themes were popular.