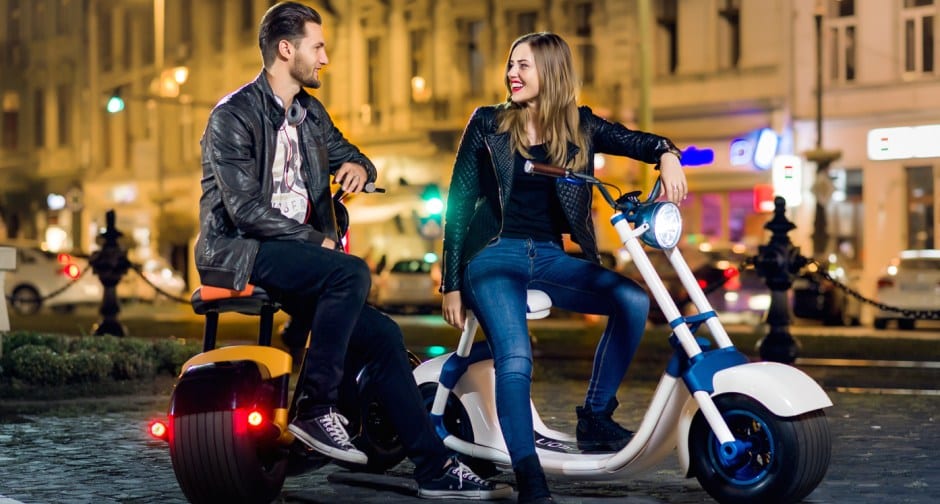 A side project, that was initially aimed at creating cool-looking electric scooters for the founders’ own personal use, is now claiming to build the world’s first intelligent electric scooter, one of its kind in the world.

“When first prototype was ready and we start testing in it on the streets, we realized how many people want it, because a lot of people approached us, we understood there is a demand we can supply”, notes Deepansh Jain, Co-founder, Scooterson, who has earlier had stints at startups with ventures like Shifu. He joined Mihnea de Vries, another founder, after they met at a conference. Latter is a Romanian serial entrepreneur and filmmaker, with 20+ years of experience in tech, marketing and film.

Though the founders were equipped with bringing an amazing product, it was the apprehension of it being counted as just another electric scooter crowding the market that they brought an AI angle to it. Jain expresses “we realized that the the company can’t scale enough to matter and really make a difference in the way we move around the cities”.

He adds, “Then, a question followed, what will happen to the two-wheeled vehicles if they remain dumb in the era of self-driving cars and shared mobility and A.I?” The team realized that it was by solving this quest that they could change the way people move around the cities.

AI- the underlying tool at Scooterson-

“At Scooterson we use AI to create an awesome user experience to maximize energy, efficiency and safety”, says Jain. It’s the intuitive body gesture, using which the scooter was built with no acceleration lever and gear changer. Jain is quick to note that their scooter can understand how fast a person wants to ride and all of it with their patent pending technology.

The team is bringing optimization with AI. “Because it’s always connected, driving data is being collected, on which we apply data science and machine learning to understand riding patterns which help us optimize power management by generating dynamic torque profiles for each user and also will predict the destination and adapt torque to available battery levels to reach that destination”, he says.

He explains another use case with AI, where a user is riding from home to work every day. The daily commute pattern can help in noting the most likely places he/she is likely to pull a brake. Identifying this pattern, they can activate semi-autonomous mode on that path, and the scooter will accelerate and decelerate in the most energy efficient way.

“In simpler words just imagine a vehicle with a brain which learns from user and adapts”, says Jain. “These are just a few examples but there are many other areas for using A.I. especially for optimising costs of the ride-sharing operations. Also we aim to have a fully autonomous product by end of 2019, when we will have enough data to discover patterns and build prediction techniques’, he adds.

Adding a note on the tools in place, he says that there are wide sets of tools which they use to build the technology—both open source and built internally. “For instance, we use rapidminer and knime for data mining. For pattern knowledge extraction initially we will use KEEL (helps in evolution learning)”, he adds.

Few of the features of Rolley, the scooter by Scooterson are—its intuitive, predicts your behaviour using AI, is adaptive, energy efficient, lets the user stay connected via the app, is keyless with smartphone or a watch acting as key, is extremely lightweight and much more.

Enjoying the lack of competition in smart two-wheeler space, the founders believe that they can bring in 15-20% energy efficiency just by optimizing riding profiles. “However this will take time since we have to gather a lot of data from each ride then mine for patterns and find algorithms that will improve the energy efficiency”, says Jain.

Highlight smart features of the bike, he explains dynamic energy management based on predictive routing could be one unique feature as after an understanding of the user’s daily habits, AI can predict the usage and destinations, to use the available battery levels to reach that particular destination.

Jain notes that after they have a critical mass of scooters on the streets uploading telemetry data, they aim to start doing analytics and statistical analysis about behaviour of users, hence allowing them to make a lot of improvements. “Analytics will have a serious role at Scooterson”, he says.

Just a few months down the line, the product has been receiving some great reviews. “We see a great wow factor whilst testing the prototypes on the streets, with many questions about the product. There were a few instances where we were chased in cars and stopped to ask where can they buy the scooter. We also had a great feedback from country distributors and customers who have reserved over 1300 units so far”, Jain explains.

On being quizzed about the future plans of AI at Scooterson, Jain is quick to add that there are virtually endless possibilities of using AI to improve products and operations costs. “After we will gather 12 months of data we are sure that we will find patterns that we are not not even thinking at this time. We are really looking forward to discover more ways for improvement and is the possibility to develop and monetize software products for two-wheelers, besides our current business models”, he adds.

They also have great plans for India, where they are evaluating the possibility to have the first assembly line based in India and leverage the “Make in India” program. “This will also help us to have a special price for Indian market”, he says.

Challenges on the way-

While fetching a lot of interest from VCs across territories like US, Singapore and India, the company has its own sets of challenges to keep up with. Jain says that with AI evolving really fast, keeping up with all the new tools offered in the market can be a challenge.

He adds “For example, Google recently launched machine learning hardware to make A.I. faster and more efficient, so we have to check it out and see how we can use this new service, for our goals. In short you need to keep evolving with the market to make algos more efficient and safer”.

Scooterson is the first company in the word that is offering a subscription based ownership model for two-wheelers, for $99 a month, with maintenance and theft insurance included.

That being said the founders are hopeful that it’s the most relevant time for Scooterson as there is a trend of favourable policy from governments– for instance, plans for lite-car society in Singapore, bans for gas scooters in Europe or China, German government announcing ban for fossil fuel powered vehicles starting in 2025, followed by many other EU countries where government has plans to switch to electric transportation including in China and India. Given the scenario, the company is looking forward to an extremely engaging future.