We build our game engine framework and tools on top of Unity and Unreal. 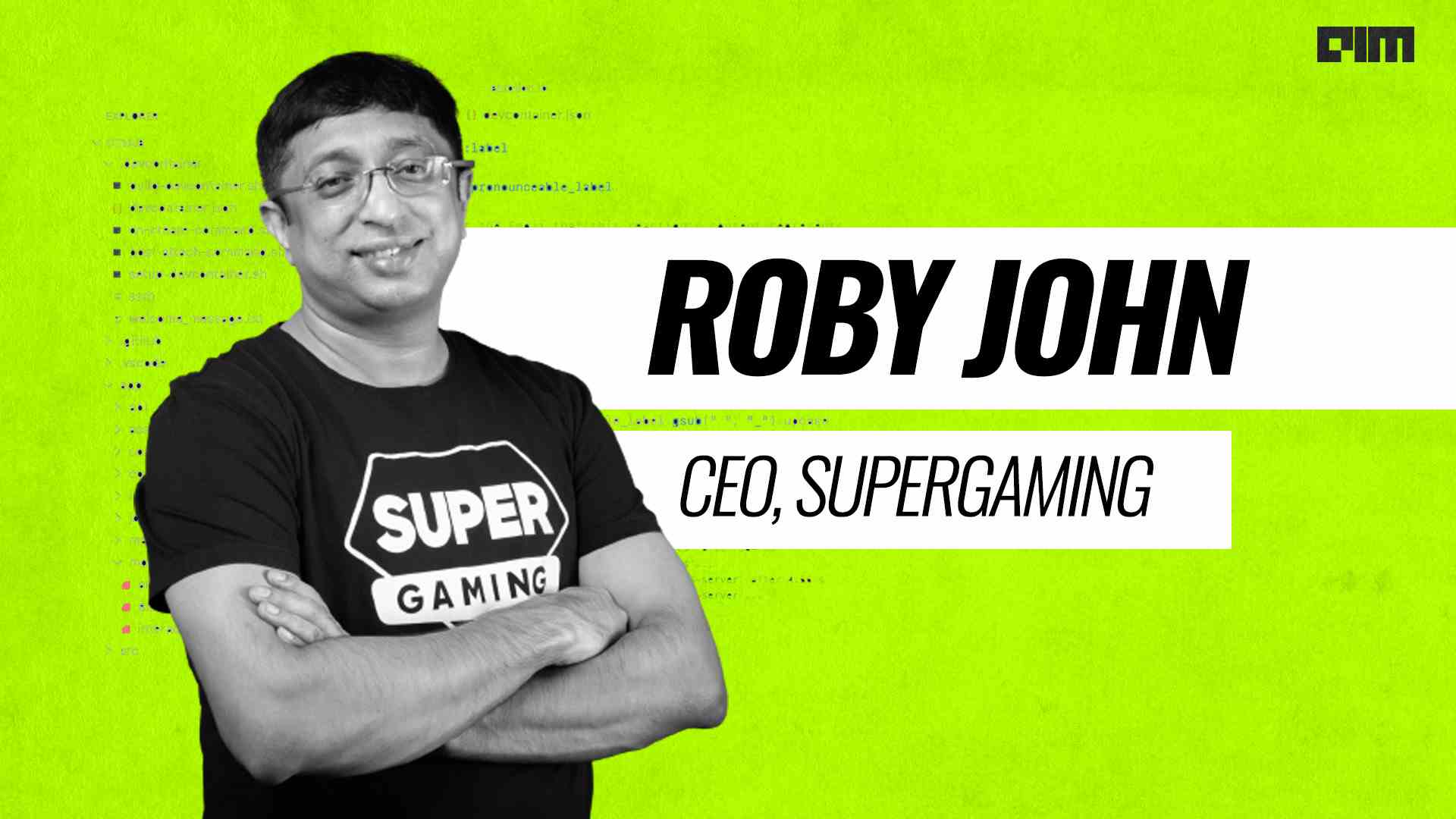 The market value of India’s gaming industry is projected to reach INR 143 billion by 2022 from INR 90 billion in FY2020, and is expected to create 40 thousand new job opportunities. The rising smartphone penetration coupled with cheap mobile data have led to mobile phones being the most preferred device for gaming in India, a Statista report showed.

Analytics India Magazine caught up with Roby John, CEO, SuperGaming, to understand the domestic market better. “I grew up with a Nintendo Entertainment System and I played non-stop. I wear specs today because I kept playing on a PAL TV with terrible contrast. However, I also realised that playing games brought the best in me,” he said.

Roby completed his BTech from the College of Engineering, Pune and later worked at AmberPoint, a Silicon Valley company, for about five years.

In 2009, he founded June and built an app for iOS and got 900 downloads on the first day. With the iPad launch in 2010, his team of five developed educational games under a brand called “TapToLearn”. “In India, if you want someone to write you a code, you have to put a gun to their head. But, writing code that others cannot write was the real jugaad,” he said.

TapToLearn ran from 2011 to 2015 until June moved away from educational games to real free-to-play games. In 2019, Roby launched his game publisher brand, SuperGaming.

AIM: What are your top three games?

Roby: Silly Royale is our take on the social game genre with many modes ranging from hide and seek to Squid Game-inspired fare for mobile. It has 17 million players worldwide, and most of them are kids and teenagers. Thanks to the voice chat feature, this platform can also be used as an adda.

MaskGun, our mobile online multiplayer shooter, has about 60 million players. We recently announced Indus, an indo-futuristic battle royale for PC, consoles, and mobile. Few battle royale games prioritise lore and story, and none tackle Indian culture with a futuristic twist. So, Indus will be a unique experience for players when it releases. Aside from Indus, our first web3 game is deep in development.

AIM: What do you look for in a game developer while hiring?

Roby: When we hire for game developer roles, we look for those with a passion for video games and an innate curiosity. Of course, a great portfolio helps as well. We also look for fun people because they get along with the team.

AIM: How does SuperGaming use AI?

Roby: AI has been an integral part of game development for a long time. I’ll share two examples – all our games have bots that you can play against if you want to practice the game. The bots are sophisticated enough and incorporate player AI and match human level.

AIM: Can you shed some light on your backend processes?

Roby: We build our game engine framework and tools on top of Unity and Unreal, and it is used to build our real-time multiplayer games. We have a custom game backend engine that uses AWS to run the actual game on the cloud. Everything we use is built from scratch in-house and has been the same tech running all our games.

AIM: How do you go about developing a game?

Roby: Our games are built around teams rather well-defined processes. The key people of a team get together and figure out what they want and build the prototype. The greenlighting happens after the prototype’s evaluation.

The first three months are spent finding and building a prototype of the core gameplay. Then, if it passes that filter, it goes to a well-defined vision of the game, then preproduction gates and finally production/soft launches before a release. The process usually takes a year.

Today, thanks to our own experience and engines, we have been able to expedite game development to months and not years to build high quality real-time multiplayer games.

AIM: What’s your thoughts on the exponential growth of the Indian esports industry?

Roby: The Indian esports industry seems vibrant right now. We are seeing international companies interested in the space, such as Krafton and Riot Games, both of which have harnessed their IP to create a self-sustaining ecosystem of professional organisations, players, and content creators.

That said, it seems to be in a precarious position when you consider how many livelihoods are in the hands of a precious few publishers — as well as their whims and fancies. So hopefully, we should see more international and local publishers jump into the fray to bring balance to a situation that’s in favour of players, creators, and organisations.

AIM: What are the challenges the Indian gaming industry faces?

Roby: India has a large talent pool without access to formal game development training. Unlike fields like accounting or engineering, the number of good game colleges in the country is next to nil. When you consider the popularity of video games in this country, it is odd that there are no institutions to support it. No surprise that the creators of some of the nation’s biggest hits have asked the government to take note and assist where they can.

India’s game development talent and a gigantic appetite for content consumption from its community suggest we’re approaching peak awareness. People are more exposed to the games business than they ever have been and deem it a viable career option. And we’re happy to play our small part in all of this.