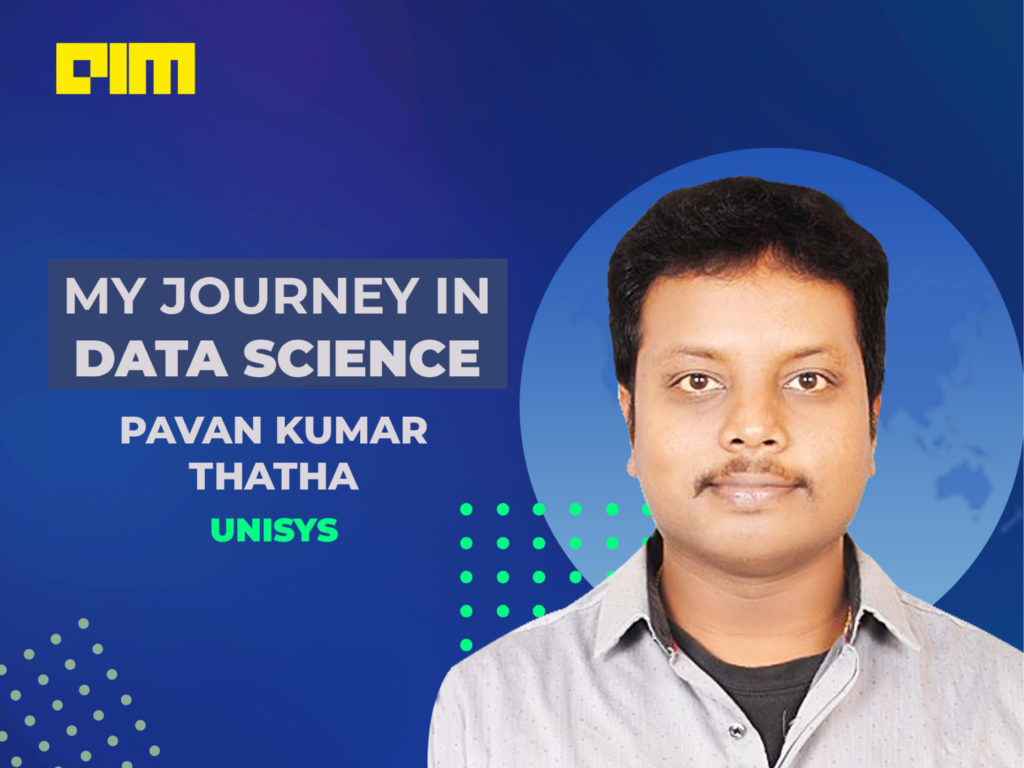 Since data science is one of the highly-paid jobs, professionals from different fields want to switch their careers to data science. However, due to the strenuous nature of the field, people struggle to make that final stride. This is mainly because aspirants mostly focus only on various data science tools and techniques. Instead, they should also be apt in storytelling and other business aspects of the domain to crack the interview. Consequently, there is a need for effectively devising strategies to land a job in the data science landscape.

To help aspirants in understanding such requirements of the data science landscape, every week, we interview prominent data scientists and get inputs from the ones who have successfully made it to the data science space.

For this week’s column — My Journey In Data Science — Analytics India Magazine got in touch with Pavan Kumar Thatha, Emerging Technologies Leader at Unisys. He has over 15+ years of experience in the IT industry with some of the leading companies such as Wipro and Kloud9 as an AI architect and Chief Data Scientist, respectively.

Having completed his bachelors in electronics and communication engineering in 2002, Pavan started his professional career in embedded systems and digital signal processing. In his first ten years, Pavan’s primary day-to-day activities involved system programming, middleware applications, and networking. However, Pavan pinpoints two reasons that lead him to get into the data science landscape in 2014. While working as a system programmer, he was involved in a project that required him to collect data from various sources and come up with statistical analysis. This is where he assimilated the potential of data for solving business problems. Besides, he was also motivated by his colleagues who were working with data to gain insights for the company.

“Back then, there wasn’t much awareness about the data science field, but I was intrigued by the domain and started exploring the space on the internet. Eventually, I found various courses, and that is where my data science journey started,” says Pavan. “I immediately fell in love with data science as it doesn’t demand expertise in any vertical of business. It is about understanding the concept and business models of a company, which is seldom a case with other technologies.”

However, he didn’t directly look for a data analytics or data science job. Instead, he continued with his system application programming role and joined Wipro in 2014. Although he was hired as an architect in the application programming, he convinced his manager to make an internal switch into the analytics department. But, it wasn’t straightforward for him to veer into the data science space.

He devised a plan and asked his manager to allow him to split the time between application programming and data science. Pavan used to spend 80 per cent of the time doing his primary job and another 20 per cent in data analytics. And within the first five to six weeks, he demonstrated his analytics skills with a proof of concept (POC), which caught the attention of the higher officials who then allowed him to make a switch into the data analytics field.

Learning The Facet Of Data Science The Hardway

After gaining an opportunity, Pavan continued his learning and implemented the techniques to gain insight into various types of data. However, to further learn advanced machine learning techniques, he enrolled in a post-graduate business analytics program of Great Lakes Institute of Management in 2016. This empowered him to learn from industry and academia leaders, thereby gaining a wide range of perspectives of the domain.

Pavan, after completing his program in 2017, he was motivated to take another stride and get into data science. But, he struggled to crack interviews. Of the many failed interviews, Pavan explained how an interview at Gartner changed his perspective, which then led him to revamp his preparation strategy. “At Wipro, as a data analyst my role was only to find insights, and when I attended the data science interview at Gartner, I realised that I was not a good storyteller, which was limiting me from explaining the implications of the data analytics outcomes on businesses,” explains Pavan. “That’s when I realised that one cannot become a data scientist without mastering the storytelling skill.”

The setback, in contrast, pumped him to enhance his storytelling skills. He started working on connecting the dots and completing the loop to make effective business decisions. Eventually, he got a job at Kloud9 as a chief data scientist. After a short stint at Kloud9, he then moved to Unisys where he is currently working as Emerging Technologies Leader.

Talking about his worst experience in data science, Pavan said that he demonstrated numerous POC at one of the companies, which would have helped the firms had it been implemented. But, due to the gap in the understanding of the potential by the management, it didn’t get the approval. “At times, it is difficult to convince non-technical people about the use cases and possible benefits of the data science insights. This is exactly what happened with me three times in a company,” adds Pavan. “My models were not taken in the production. Consequently, I consider it the worst experience.”

Pavan currently works with gigabytes and terabytes of data using various tools such as Spark, Databricks and more. Besides, he also hires data scientists for various roles but doesn’t focus on certifications at all. “PhD and Masters doesn’t necessarily provide an edge. Rather, we seek applicants who are self-learned, understand business problems and solve them,” says Pavan. Besides, he also looks for job seekers who are proficient in cloud computing. Pavan believes, today, expertise in cloud computing is essential for data scientists to thrive in the competitive landscape.

For aspirants, Pavan advises that they should focus more on hands-on experience and not just read or watch videos to learn technical skills. To do this, one must actively participate in various hackathons to test their knowledge. However, he pointed out that participation is crucial than winning it. A few people are not enthusiastic about hackathon because they have self-doubts. This stops themselves from taking part in various competitions. Besides, he suggests that one cannot master every technology within data science. Consequently, one should pick one technology like computer vision or NLP and master that while being aware of other technologies within the data science landscape.