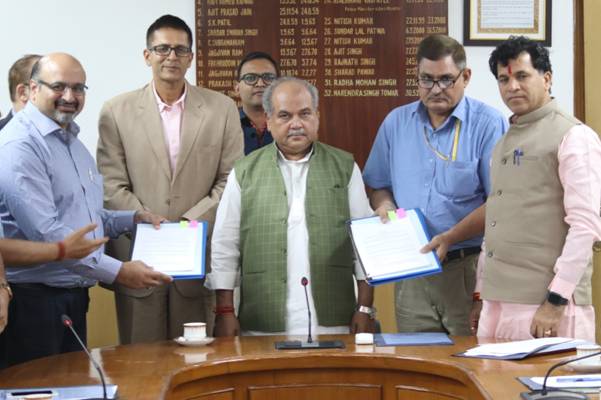 Ministry of Agriculture and Farmers Welfare this week signed a Statement of Intent (SoI) for undertaking a pilot study with IBM India, where the company would generate solution in the field of agriculture through artificial intelligence and weather technology at the farm level to provide weather forecast and soil moisture information on pro bono basis. This information will be used by the farmers to take decisions regarding water and crop management for better production and productivity.

According to a statement released by the Press Information Bureau, this project would be launched in the three districts of Bhopal, Rajkot and Nanded in the States of Madhya Pradesh, Gujarat and Maharashtra respectively.

Speaking at the occasion, Tomar said ‘‘Our nation is foraying further into the digital age in the line of aspiration of Prime Minister Narendra Modi towards achieving the goal of doubling the farmers’ income and it has been the Ministry’s assurance to bring digital technologies to help our farmers to increase their income and transform Indian agriculture’’. The Minister also added that enabling the use of next-generation technologies such as AI and advanced weather data for better insights to make faster and more informed agricultural decisions is a testament to our commitment.

As part of the collaboration, IBM Watson Decision Platform for Agriculture will be leveraged to obtain farm level weather forecast and village level soil moisture in three districts in Central & Western India. This pilot study will be conducted for the Kharif crop season 2019.

Stressing on the term agri-scientists, the BJP-led government had earlier said that they would enable the development of young minds to take advantage of artificial intelligence, machine learning, blockchain and big data analytics for more predictive and profitable precision agriculture.