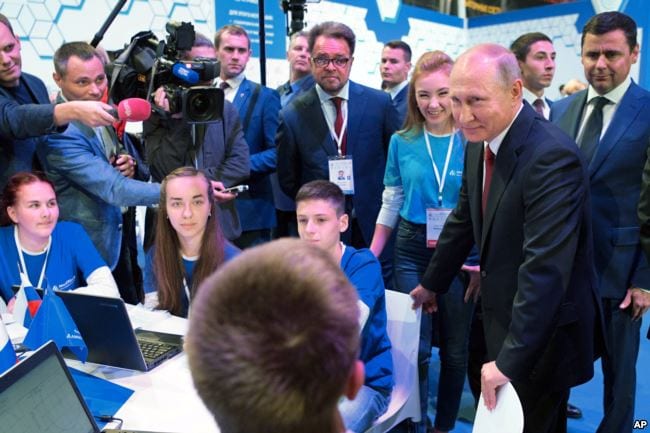 Russian President Vladimir Putin has the answer to who will rule the world in the times to come. According to him, the country, which reaches a breakthrough in developing artificial intelligence will dominate the world.

Putin, speaking to a group of Russian students Friday, called artificial intelligence “not only Russia’s future” but “the future of the whole of mankind.”

“The one who becomes the leader in this sphere will be the ruler of the world,” he said. “There are colossal opportunities and threats that are difficult to predict now.”

The Russian leader predicted that future wars will be fought by drones, and “when one party’s drones are destroyed by drones of another, it will have no other choice but to surrender.”

On the occasion, he also discussed space, medicine and the capacity of the human brain.

“The movement of the eyes can be used to operate various systems, and also there are possibilities to analyse human behaviour in extreme situations, including in space,” Putin added.

The Russian president’s 45-minute open session was reportedly attended by students and teachers from 16,000 schools.

Top officials, both in government and in the private sector, have long been willing to discuss the impact of artificial intelligence and other technological advances.

Russia and China are seen as key competitors in the digital space and have been working on how to apply technologies, such as artificial intelligence and quantum computing, to their war-fighting doctrines.

As per recent reports, China will launch a series of artificial intelligence (AI) projects and increase efforts to cultivate tech talent as part of a soon to announced national AI plan, the China Daily said on Friday.

The country is focusing on AI as it is seen as a tool to boost productivity and empower employees, the paper said. China will roll out a slew of AI research and development projects, allocate more resources to nurturing talent and increase the use of AI in education, healthcare and security among other things, the report said.

However, many experts say the U.S. still maintains an advantage over Russia in artificial intelligence and quantum computing. Still, as Russia, China and other countries seek additional breakthroughs in how to apply such technology, the stakes are high.

Are We Really Moving Towards An AI Arms Race?