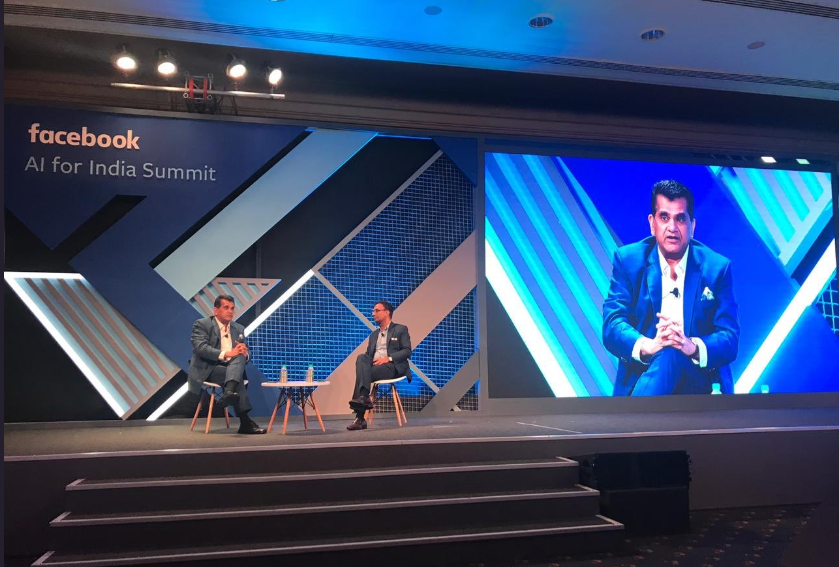 Facebook on March 26 concluded their first ever AI for India Summit in Bengaluru, where the social media giant invited stakeholders from across the spectrum to discuss the best practices of AI for promoting social good.

The day-long conference saw the participation of NITI Aayog, CEO Amitabh Kant and Facebook’s global AI team, among other popular names for an in-depth discussion on driving inclusive growth in the country.

The closed-door meeting was restricted to a key representative from AI communities in India such as policymakers, startups and the developer community and the topic of discussion ranged from the application of AI in healthcare, education, agriculture, and crisis/disaster mitigation.

“The Summit will bring together key representatives from the AI (Artificial Intelligence) community in India such as policymakers, start-ups, and the developer community,” the company said in an earlier press statement.

For the opening remarks, Ajit Mohan, Facebook VP, said that the company has collaborated with SEED, a disaster relief and rehabilitation organisation for during the Kerala Floods.

“We need to use AI to leverage the existing strong community of FB to provide some strategic thinking that is aligned to humanitarian principles of impartiality and independence,” Manu Gupta, Co-founder of SEEDS tweeted.

During the 2018 unprecedented floods in Kerala, which claimed close to 400 lives and submerged majority of the districts, Facebook Live and posts were widely used by the stranded people and rescue-coordination teams for sending distress messages.

Facebook has been taking continuous effort towards bettering it effort in India and has rolled out a number of initiatives to promote best practices of AI in India.

“Facebook is committed to the growth of India, and wants to be an ally to India for developing an expertise in AI,” the press release said.

On October 2018, the social media giant launched a blood donation centres for 217 million users in India. The development helped its users to locate the nearest blood donation camps, events, requests for blood donors and blood banks as well. It also announced that that platform has organisations like National Blood Transfusion Council and  Giants Welfare Foundation to set up 2000 blood donation camps

Delivering the keynote address, Amitabh Kant, highlighted that the focus for developed technological development should be to solve problems in domains like education, nutrition at a larger scale in India.

“Delighted to participate in Facebook “AI for India” summit & interact with CEO Ajit Mohan. #AI will bring fundamental change and have a profound impact on India. We are in a virtuous cycle of data, products, consumers, growth. Asked FB to use its AI knowledge for social good in India,” Kant Tweeted post the event.

Delighted to participate in Facebook “AI for India”summit & interact with CEO Ajit Mohan.#AI will bring fundamental change and have profound impact on India.
We are in a virtuous cycle of data, products,consumers, growth. Asked FB to use its AI knowledge for social good in India pic.twitter.com/Vm4Mfg6wkn

Facebook in recent times has come under severe criticism for its negligence malpractice through the platform. Recently in the wake of recent New Zealand shooting, Facebook received flacks and many users questioned the inability of its AI system to automatically detect the attack.

Commenting on the event, Facebook said that the algorithms failed to do so has as the training data set lacked enough content to identify the event, “This approach has worked very well for areas such as nudity, terrorist propaganda and also graphic violence where there is a large number of examples we can use to train our systems. However, this particular video did not trigger our automatic detection systems,” the company said in a statement.

It also added that the company will be working towards strengthening their AI systems.

In India, however, the present challenge that it faces is that of misinformation. With the 2019 general election looming closer and with political parties resorting to spreading false news through platforms like Facebook, and its subsidiary, WhatsApp, The Election Commission of India have given warning to all the major political outfits to take stern measures to tackle the issue.

While WhatsApp has taken measures like limiting forward message, Facebook has laid stringent rules regarding placing of political add in their add.