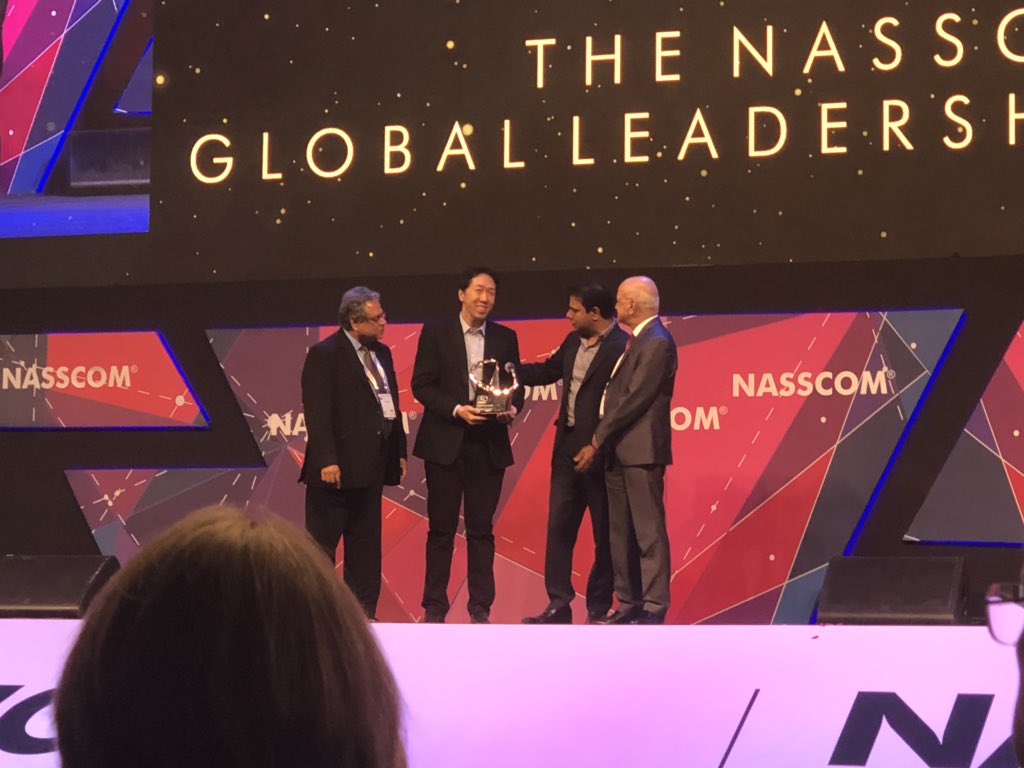 As India lays down a framework for its sweeping vision for AI-led innovation, the Government’s think-tank Niti Aayog has swung into full action to accelerate development by partnering with international experts to lend expertise on drawing an AI blueprint for India. The current visit of former Google Brain and Baidu chief Andrew Ng at the ongoing Nasscom India Leadership Forum and the 22nd edition of the World Congress on Information Technology is a sign that Niti Aayog wants to deliver good on their vision of an AI-led economy. 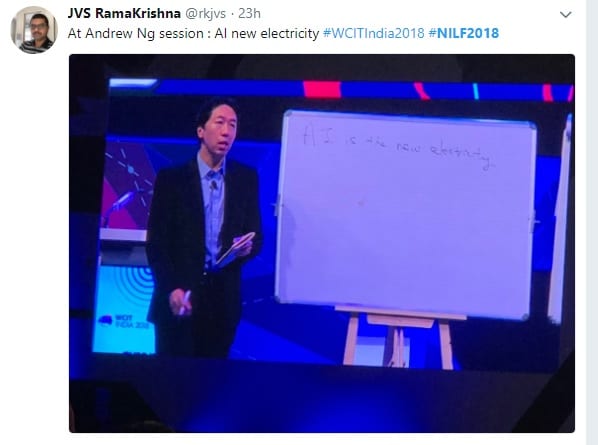 a)  Global investors are keen to step up their investment in India by setting up dedicated AI centres. Shantanu Narayen led Adobe announced setting up an advanced AI lab in India in Hyderabad, the city was chosen because of its talent abundance and the pro-business stance of minister KT Rama Rao.

b) Partnerships and investments in AI startups abound: From leading chipmaker Intel to Google, cloud giant Microsoft and e-commerce leader Flipkart AI has become the backbone of development. In line with global trends, AI startups in India have also witnessed exponential growth and in 2016 India ranked third among G20 countries measured by the number of AI startups, reveals an Accenture report. However, the size of funding received is substantially smaller than in the United States and China, reflecting the limited success of India’s AI startups in achieving scale so far.

c)  Significant investment in research: Just like Canada and China, India is now following a similar growth plan to accelerate development by investing in R&D. The Union Budget 2018 saw an increased spending on core AI research and steps are underway to facilitate ecosystem collaboration for an AI-led innovation and create opportunities for Indian startups. Recently, the Government set up India’s first AI research institute in Mumbai, Wadhwani AI launched by PM Narendra Modi on February 18. The nonprofit research institute will work to develop AI-based solutions in domains such as health, agriculture, education, and infrastructure.

d)  States like Telangana, Andhra Pradesh and Karnataka will transform into an AI Hub: On the sidelines of the NILF WCIT 2018 forum, the Telangana government and NASSCOM announced setting up a Center of Excellence for Data Science and Artificial Intelligence. Built on a public-private partnership model, the centre would create a robust Data Science and AI ecosystem for the various stakeholders to thrive, by providing support, mentorship, and other capabilities.

What does India stand to gain from Andrew Ng-Government partnership? 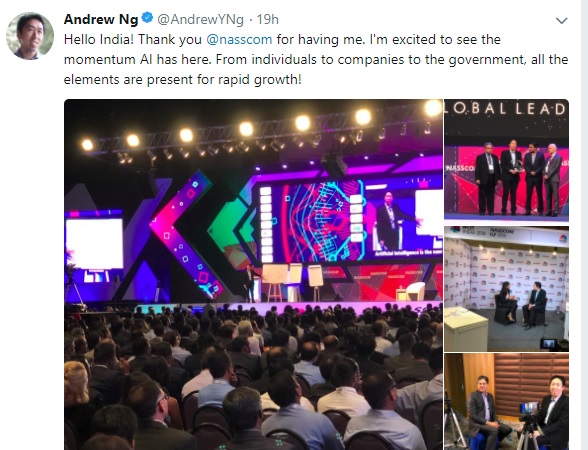 As the Indian Government plans to reboot itself for an algorithm economy, Andrew Ng’s visit to India holds a lot of significance. Besides lending credence to the Government’s efforts, the visit underscores India’s long-term vision and commitment to the action plan. As per an ET report, the prominent scientist would be briefing Cabinet Ministers on how to build an AI ecosystem in India and even address technical and ethical issues.

Ng had been at the forefront of AI evangelism with his Coursera courseware and now his AI fund is all set to build startups from the ground up – through this he wishes to replicate the model. Besides lauding the Government’s “thoughtful plan”, Ng also mentioned that India is still in early stage of AI development and has a chance to capture a large piece of the story and even race ahead.

Here’s how Andrew Ng can make an impact for India:

Prepare the next generation in STEM expertise: If one thing is clear is Ng’s heft and expertise in building a new, multi-disciplinary workforce with STEM skills.  The popularity of his course is only soaring in India – out of the 1.92 lakh enrolments that registered worldwide for the recently launched deep learning course, 25,000 participants were from India. Meanwhile, Coursera’s most popular offering — machine learning saw a whopping 3 lakh participants from India. Interestingly, reports indicate that the Government is planning for a refresher on AI from Andrew Ng.

Navigate the challenges by setting guiding principles on AI: While the economic impetus is being driven by aggressive investment by global IT major and Chinese players, India still have to navigate the choppy waters of AI regulation. In this space, Canada, US, UK, Singapore and Europe are the frontrunners with policies and frameworks to develop regulation. On the other hand, India is still at the roadmap phase, however, the country would be well-advised on the twin goals –of rapid adoption, regulation and setting the guiding principles on “responsible AI” by Ng. Ng is the right candidate to advise Indian government on how to balance AI growth with ethical consideration.

Broaden access to data with Data Bank: While India has already increased its funding on the R&D front, there is also a rekindled interest in the academia around ML/AI and areas such as NLP, Information Retrieval. However, there is one area where India lags behind hugely – data consolidation. Much of China’s success can be attributed to its vast data bank, India has only now begun to give shape to its data consolidation strategy. The Union Budget 2018 saw the announcement of Niti Aayog launching a National Data and Analytics Portal to facilitate training and dataset sharing between different organisations for AI-related applications. Ng would advise the Government on how to effectively leverage AI resources to create opportunities for a) big and small players; b) use it for economic and social governance; c) improve public safety and areas such as healthcare. India would also be well-advised on how to develop a National AI plan that involves multi-stakeholder partnership in key sectors such as finance, healthcare et al.