How China Is Keeping Unemployment Under Control With Cobots 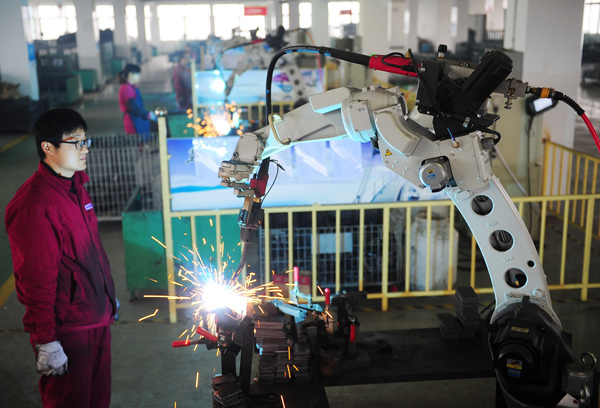 There is no counter-argument to the statement that China is currently at the helm of artificial intelligence-powered development in the world. The country continues to aggressively push for AI development and the range of AI-based solutions that the Chinese Technology provider roll out each year is even more mind-boggling.

Interestingly, one of the emerging developments in the country which is touted to shape the future of automation in the factory floor is “cobots” or collaborative robots, which are designed to work alongside humans, instead of replacing them. Cobots are considered to be a breakaway from traditional autonomous robots which are designed to perform a single task and are seen as a replacement for humans.

While the biggest advantage of the cobot is its ability to learn from humans while working alongside them through demonstration and reinforcement learning, it can also multitask through constant learning. Thus, addressing the larger fear of job loss at the advent of automation.

Owing to the presence of its thriving industrial manufacturing units, the technology has proven to be more productive and the country hopes the increased development in the field will put China in the global robotics map. Further, by pushing for increased adoption of the technology, the government hopes to secure the jobs of scores of factory floor workers, who would have otherwise been rendered jobless in the wake of increased automation.

“Advances in machine learning techniques, cost reductions in technology and cost increases in human labour are now making collaborative robots more economically viable for smaller and midsize businesses,” Lionel P. Robert Jr, associate professor at the School of Information at the University of Michigan said to an online portal.

With the market ripe with opportunity in the field, foreign players are entering the Chinese market in an attempt to make it big. In 2018, ABB, a leading robotics company announced its plan to build an advanced robotics factory in the Chinese city of Shanghai. The company has made an investment of US$150 million where its focus is to combine digital technologies to create state-of-the-art collaborative robots.

“There’s a large shift away from looking at factory size and CAPEX investments as the way to meet future demand. The concept behind our new factory is to make the smartest and most flexible use of every meter of production. That comes from combining agile automation solutions with the great capabilities of our people,” Per Vegard Nerseth, Managing Director of ABB’s Robotics business in a press statement.

Who are the other key players in the field

Aubo Robotics: Is a Beijing-based company, whose four collaborative robots are known as a Cobot. It is designed to work closely within a human work-space without safety equipment, depending on risk assessment. AUBO-series are a six-axis, 3, 5, 7, and 10 Kg payload with 625 to 1350 mm reach lightweight industrial robots made for human-centric agile manufacturing and are user-friendly, flexible, low cost and very easy to move, re-deploy and can be plugged into a regular 110 – 230 VAC wall socket to run.

Hanwha: The company’s HCR-5 is a robot designed to enhance job and productivity in the industry floor. It is flexible arms can be placed where humans cannot access. Its features and capabilities allow it to adapt to different manufacturing processes without changing the existing production line and can handle dangerous, monotonous, or repetitive tasks.

Doosan: Though it entered the collaborative robotics market much later, the company has launched several solutions in the field. Its cobots have a load capacity of 6 to 15 kilograms and a working radius of 0.9 to 1.7 meters. It requires a lower set-up and investment cost than industrial robots. Cobots can work alongside human operators without safety fences thanks to highly sensitive torque sensors.