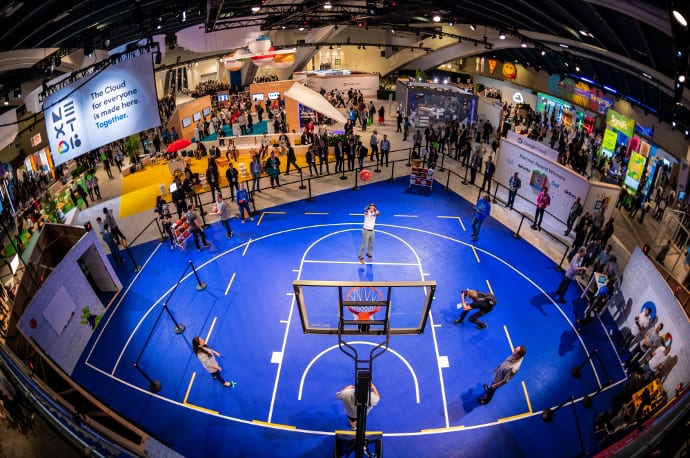 If there is one big takeaway from the recently-concluded Google Cloud Next 2018 conference, is how the tech behemoth wants to position itself as a strong contender in the hybrid cloud business dominated by Amazon Web Services and Microsoft. This was evident in Google’s embrace of private, hybrid, edge and multi-cloud computing. Another key announcement was about the company expanding Cloud AutoML — the machine learning platform it announced at Google I/O last year — into new areas like Vision, Natural Language and AutoML Translation. This comes at a time when AWS cloud revenue increases 48.9 percent in the second quarter. As the cloud market moves into various cloud architectures, companies are getting more competitive in the face of continuous change and introducing additional artificial intelligence products to draw in more customers.

To help enterprises kickstart their AI projects easily, Google introduced Cloud AutoML beta which enables developers to train high-quality custom ML models with minimum effort and ML expertise. Cloud AutoML is a suite of ML products that enables developers with limited expertise to train high-quality models that are core to their business needs, by leveraging Google’s state-of-the-art transfer learning, and Neural Architecture Search technology. According to Google, AutoML puts in more than 10 years of research into the hands of developers and provides a simple GUI to users to build custom machine learning models by training, evaluating and deploying models based on data.

So far, Google AutoML’s tagline has been that it helps democratise deep learning and Google’s vision has been, as put succinctly in a forum:

Data in > architecture built > model out

Given how deep learning is a computationally-intensive field, Google has lowered the entry barrier with AutoML for researchers who can now get groundbreaking results with their state-of-the-art-tools, plus bring down computation costs.

Touting AutoML — Another Marketing Machine For The Future

However, there is another side to this argument where it seems like Google is using AutoML as a talking point to sell GCP. Dr Fei Fie Li, Google’s Chief AI Scientist, says:

“Currently, there are only thousands of deep learning researchers and a million data scientists across the world who can build advanced machine learning models. With Cloud AutoML, we want to help less-skilled developers build these models”.

Besides, Google has always maintained that designing neural nets is extremely time intensive and requires an expertise that limits its use to a smaller community of scientists and engineers. That’s where AutoML can lower the entry barrier with Cloud APIs that can help build powerful custom machine models and deploy these models trained directly on Google Cloud. Cloud AutoML is already deployed by Disney and Zoological Society of London. According to Mike White, CTO, SVP, Disney Consumer Products and Interactive Media, Cloud AutoML’s technology is helping us build vision models to annotate our products with Disney characters, product categories, and colours.

Is AutoML The Best Way To Mainstream DL?

It is in Google’s vested interest to tout that automated ML can pave the way for a superior approach. While Google has put in significant research in automating tasks such as data preprocessing, ML modelling, algorithm selection and even model benchmarking, experts point out there are research papers like Jeff Dean co-authored Efficient Neural Architecture Search (ENAS) that propose a fast and inexpensive approach for automatic model design. In addition to this, there is Differentiable Architecture Search (DARTS) which addressed the scalability challenge and is faster than state-of-the-art techniques. For example, experts claim DARTS is faster than Google’s NASNet, the computer vision algorithm that achieved an 82.7 percent accuracy on the validation set. Since launching AutoML, Google researchers have been able to build and manage a computer vision algorithm called NASNet. The Google blog mentions that NASNet performs 1.2 percent better than all previously published results and is on par with the best unpublished result reported on Arxiv.org.

As part of its aggressive push for Google Cloud Platform, Google Cloud AutoML Vision, Natural Language and Translation available in public beta delivers immediate results to businesses who lack key resources or knowledge of DL. Google has constantly pegged Neural Architecture Search as the key to make ML accessible to users and Cloud AutoML. However, a critical element for this is labelled data. Now, we all know the term AutoML — automated machine learning is a way to select models and optimise hyper-parameters.

A Fast.ai blog suggests that even though Google mainstreamed the term AutoML with its 2017 research paper, there are other superior techniques that use fewer GPU hours. Also, the Neural Architecture Search approach pegged by Google and defined as “neural net to design neural net” is reinforcement learning that allows discovering new neural net architectures. In a way, it tore through Google’s AutoML that suggested the best replacement for ML expertise is data and 100 times the computation power.