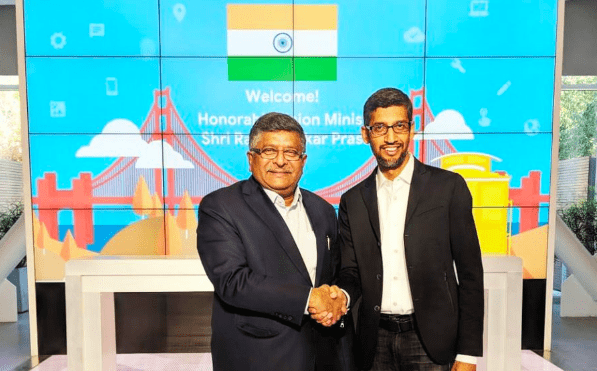 Prasad, who has been championing the use of artificial intelligence and machine-to-machine communication in sectors like healthcare and education, tweeted, “Held a very meaningful meeting with the Google team at their California headquarters. Sought greater involvement of Google in digital inclusion programs of India including Digital Village. Asked them to work for creating more awareness among India’s farmers about weather and scientific farming.”

During the visit to the Google Campus, Prasad reportedly met senior team members and was briefed about Google’s plans in India. They also talked about enabling access, Indic language computing, AI solutions for social good and capacity building of startups and SMEs.

He had earlier said that India had the world’s third-largest startup community after the US and the UK, and that his ministry was working in mission mode to make India’s digital sector stronger. “We would like India to become a centre of small product cyber security and we must look at how IT can help India become a big centre of data analysis,” Prasad had said.

Through a series of events and speeches from earlier this year, Prime Minister Narendra Modi is seen to have been deliberately showcasing India as well as his government as technologically forward. Industry insiders are happy to see that the Modi-led NDA government is working towards supporting a tech-driven future.

Earlier this week, at their annual flagship conference Google For India 2018, the search engine giant announced the launch of Navlekha, a platform built to help Indian language publishers get their content on the internet. The company also announced that Google’s search feed will now display favourite news from both English and Hindi sources, using AI that learns which types of stories the users like best.

Google also made a slew of announcements tailor-made for India. Apart from crisis response and SOS alerts, Google also hinted that the company would use AI and machine learning to not only predict natural disasters but also address healthcare issues in India.

The company explained that since around 40 million new users come online in India every year, both from rural and urban areas, it has greatly transformed the Indian economy and culture, from the rise of local startups to the growing use of e-commerce, digital payments, ride sharing, and online videos, among others.