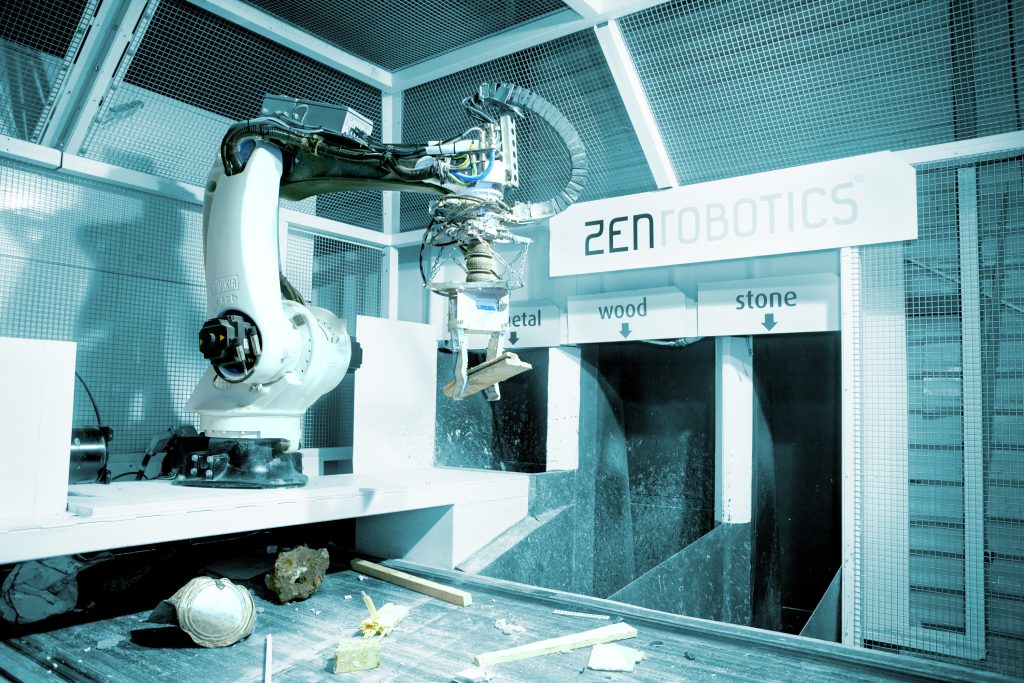 Remember the plot of the popular American dystopian comic science fiction, WALL-E? This movie plotted in the year 2805 saw the abandoned earthed contaminated with garbage and a robot trash compactor left behind to clean up the mess. This article too talks about a lot of garbage and robots, except it is not the future but the current scenario.

With a growing popularity of artificial intelligence and robotics, it is not surprising to see these tech venturing into waste management and garbage handling. It all started with a 2007 founded company, ZenRobotics, which specialises in AI controlled robotic systems. Its robotic waste sorting is the first robotic system that accurately separates solid wastes of different kinds. A combination of their smart software and standard industrial robot, various sensors continuously monitor the waste stream. This very popular and smart ZenRobotics Brain analyses the sensor data in real-time.

Another popular robot in is Wall-B by Sadako Technologies founded in 2012, which is currently in the fine tuning stage and plans to become fully functional by 2016. Based on the state of art computer vision and advanced robotics, it works in sorting recyclable material to improve the recovery rate of the plant in a cost-effective way. It essentially picks up different kinds of plastics moving down the processing line and can tackle between 100 and 500 tons annually.

BioHiTech is another company integrating artificial intelligence into waste management. With an aim to find alternative process that could aid cost cutting they began with making smart digesters with the very recently launched BioHiTech Alto, which uses AI to take the digesters altogether onto a new level. It is the first chatbot in the waste industry and relies on big data to offer a sustainable future.

Another recent advent in the field is the pilot collaboration of Carton Council with AMP Robotics and Alpine Waste & Recycling to bring in a robot ‘Clarke’ into waste recycling. Still under making, it has significantly improved its recycling skills during its experimentation trials and can recycle 60 cartons per minute with a perfect accuracy. With its super human speeds, it intends to divert material for re-processing which otherwise would have piled up in a landfill.

There are many more companies such as Bin-e which is an intelligent waste management system that segregates and compresses the waste, Max-AI™ technology by National Recovery Technologies (NRT), which is an artificial intelligence based product that identifies recyclable products and other items for recovery, and several others.

While India has been grappling with waste management issues, there are not many companies in this space that are utilizing artificial intelligence or robotics. With a continuously towering waste heaps, the dumps at many places are a reason of major outcry. Though there are many companies who are working towards dealing the waste, there aren’t many instances of robotics or AI being at place.

Omnipresent Robot Tech is one such leading providers, which has been instrumental in cleaning and restoring Ganga river. The unmanned water surface vehicle Ro-Boat can detect, collect and eliminate all kind of trash including chemical effluents and other wastes that float on the surface of water. This device equipped with fog lights and a pan-tilt zoom camera, can operate for 24 hours and has been identified as a possible technological intervention of cleaning the river.

The Delhi based company’s Ro-boat has been touted a potential technology for cleaning garbage and dirt from river or water bodies.

In few other non industrial approaches, a group of students from Gurgaon won the second position at the 13th World Robotics Olympiad for designing a robot that can collect recyclable waste from homes. With a theme of ‘Rap the Scrap’, this edition of World Robot Olympiad was conducted in India. This robot, by team High Voltage (Jainil Ajmera, Prakhar Mittal and Abhimanyu Deb Singh between the ages of 14 and 15), identifies and segregates different kinds of waste and transfers it into the garbage bin, making recycling much easier.

In a similar effort at World Robotics Olympiad, few students offered hospital-waste management solution which allows segregation, transportation and treatment of different types of waste emerging from the hospital. The team used eight robots to segregate different types of hospital waste at source, its transportation and treatment at the last stage.

India evidently lags behind other countries when it comes to an automated waste management system and while it is stepping its foot ahead in all the major industries with artificial intelligence, machine learning and AI, it would be interesting to see many startups cropping in garbage handling too.