This time it’s different for Indian IT

Unlike in the 2000s, Indian tier-I IT services firms are strategic partners and not glorified staffing providers. 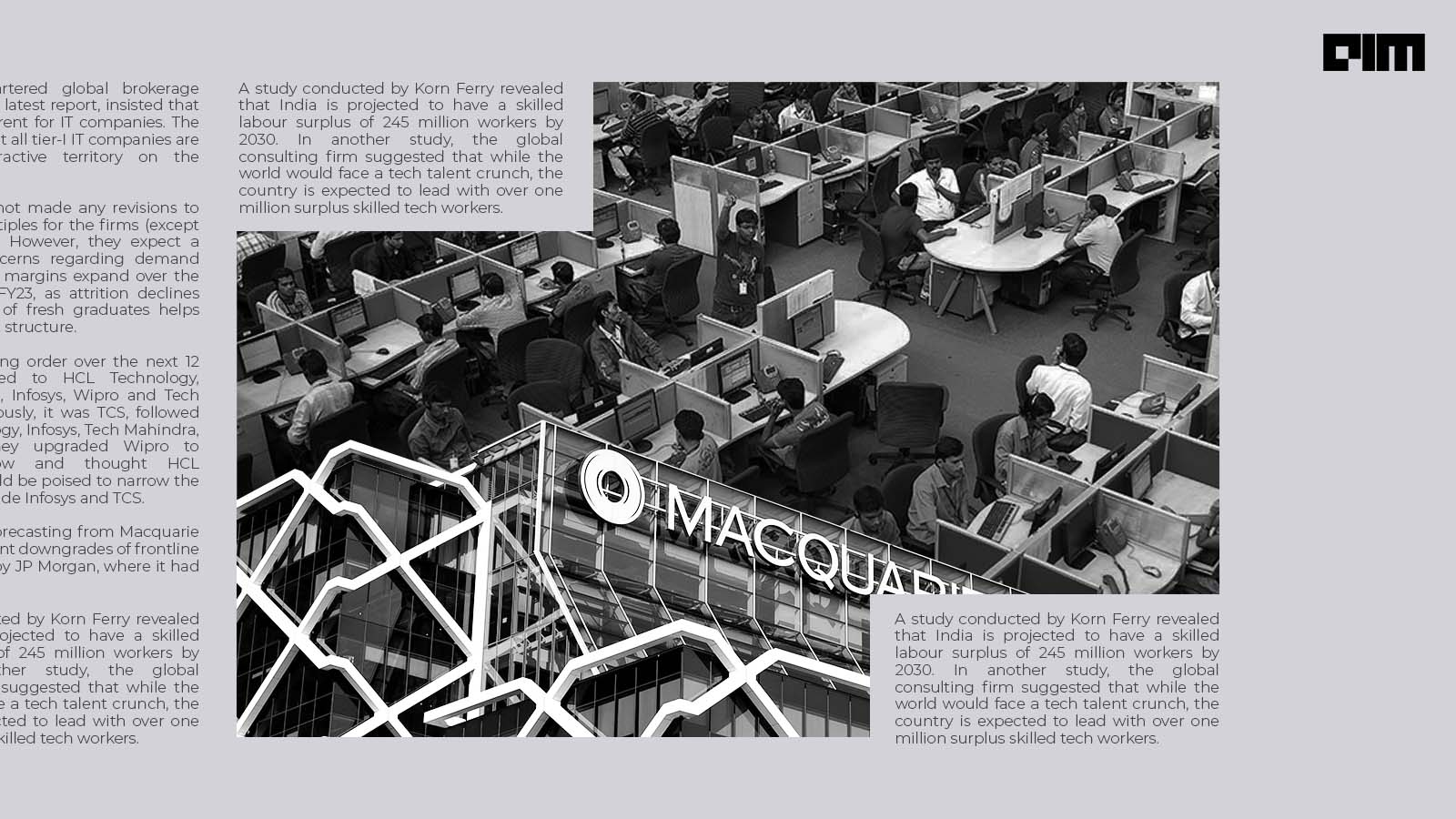 Sydney-headquartered global brokerage firm Macquarie, in its latest report, said it’s different this time for the IT companies, compared to previous recessions. The firm believes the India tier-I is an attractive territory.

Macquarie has upgraded Wipro to ‘outperform’ from ‘neutral’ and said that TCS and HCL Technologies would remain their top picks. However, given the sharper correction in HCL Technologies and the improved outlook for IMS, the brokerage has changed the pecking order to HCLT>TCS>Infosys>Wipro>TechM from TCS>HCLT>Infosys> Tech Mahindra>Wipro.

“We revised earnings across the board with updates following FY22 Q4 results and updated USD-INR assumptions at 77.6,” said Ravi Menon, an analyst at Macquarie Capital.

This time it is different. But, why?

“When India Tier-1 were much smaller players and acting as providers of skills and not solutions, the impact on them was more severe,” said Macquarie.

Post-global financial crisis, India Tier-I grew to became strategic partners and are not likely to be as impacted by minor cuts in IT budgets that are likely to fall first on smaller firms that are staff augmentation providers.

Further, Macquarie said they might also be beneficiaries of vendor consolidation deals. “We do not expect ‘knee-jerk reactions’ from any firms as the baseline expectation is that if there is a US recession, it will be mild,” said the Macquarie report.

Macquarie believes even firms that did phenomenally well during the pandemic, and are facing revenue and margin headwinds now, are not expected to slash technology budgets. However, they might reduce travel costs, limit the extensions granted to highly experimental projects, and are likely to shrink budgets by ~1 per cent.

The optimistic forecasting from Macquarie comes after recent downgrades of frontline IT stocks from JP Morgan. It downgraded TCS, HCL, Wipro and L&T to ‘underweight’ from ‘neutral’ and slashed its target price by 15-21 per cent over margin, revenue concerns, surging inflation, and supply chain issues in the wake of the Russia-Ukraine war.

Here’s a quick overview of the Indian IT sector by Macquarie and JP Morgan:

Macquarie said that, unlike in the 2000s, Indian Tier-I IT services firms are strategic partners and not glorified staffing providers who will be the first to bear the brunt of cuts.

Macquarie said BFSI is the biggest vertical for most Indian Tier-1, and demand seems resilient, citing JP Morgan that has upped CY2022 tech spending by 12.8 percent. “We think firms that choose to cut back will be risking long-term competitiveness,” said Macquarie.

Macquarie said that technology investments are like a nuclear arms race, and where one bank leads, others must follow.

As per Macquarie’s Asia technology team, the server demand is not slowing. It said that ‘server/networking tracker: remains positive on datacenter server growth’ as of May 2022.

The firm’s channel checks indicate no change in demand, barring slight declines in specific segments. The company said no material changes were done to the demand environment for India Tier-I and any cost savings attempts are likely to lead to vendor consolidation, favouring larger firms.

But how did they come to this conclusion? Typically, the brokerage goes to different users to check if the IT companies’ demand has changed. If the users (say a production or manufacturing company) say that they have stopped using them, they will reduce volume.

Macquarie said even retailers who have reported slowing sales or are warning of margin pressures continue to spend higher on CAPEX.

For example, Target has raised its CAPEX guidance for CY22 to the higher end of its earlier guidance of USD 4-5 billion even though only 55 percent of its sales come offline now and online continues to grow faster than offline. Meanwhile, other retailers such as Macy’s are seeing improved results temporarily as customers switch to higher prices and higher-margin products such as office wear and clothes for special occasions.

Menon said the drivers for digital transformation are linked to business strategy, and the technology changes are expected to deliver either higher revenue or lower costs or both. He said there is a strong business case to continue spending, as years of investments to stay ahead of peers can be undone by a short-sighted cost-cutting measure.

Macquarie said the demand they saw over CY21 is not just pent-up demand but an indication of the biggest technology refresh in Enterprise technology landscapes since the adoption of  web technologies and ERP in the 2000s.

In other words, the 2021 higher P/E and IT valuations were not because of the 2020s lows. Instead, it was due to higher adoption. Life-time-value (LTV) of SaaS and tech in a B2B setting is at least ten years, and there is no reason for the industry to worry now.

Menon said while there is some correlation between S&P 500 revenues and tech spending, people should not expect a like-to-like move as this ignores cost deflation in hardware and cost deflation in the 2000s from embracing offshore execution.

Opportunities in the time of crisis

Macquarie believes that just because the economy does badly doesn’t mean the recession seeps into IT. On the bright side, the demand is likely to continue for IT with digital transformation happening across industries.

Macquarie said unlike the INR depreciation in 2014/15, INR depreciation benefits will be partly retained by vendors this time, given this is still a supply-constrained market and likely to remain so.

Is the IT sector recession-proof?

Compared to the rest of the world, the Indian IT sector has always had higher resistance to recession and survived the 2008 financial crisis, the dot-com bubble, and the pandemic unscathed. The majority of the leading IT companies grew significantly during these critical times thanks to their strong fundamentals and surplus cash reserves. For instance, Infosys clocked 19.7 percent revenue growth during the pandemic (2021-22).

Even if the US recession hits the Indian shores, this will work in the IT sector’s favour because most of them are likely to redirect their outsourcing work/projects to countries like India, the Philippines, because of the cost benefits and tech talent available in these countries.

A study conducted by Korn Ferry showed India is projected to have a skilled labour surplus of 245 million workers by 2030. The firm said, while the world would face a tech talent crunch, India is expected to lead with over one million surplus skilled tech workers.