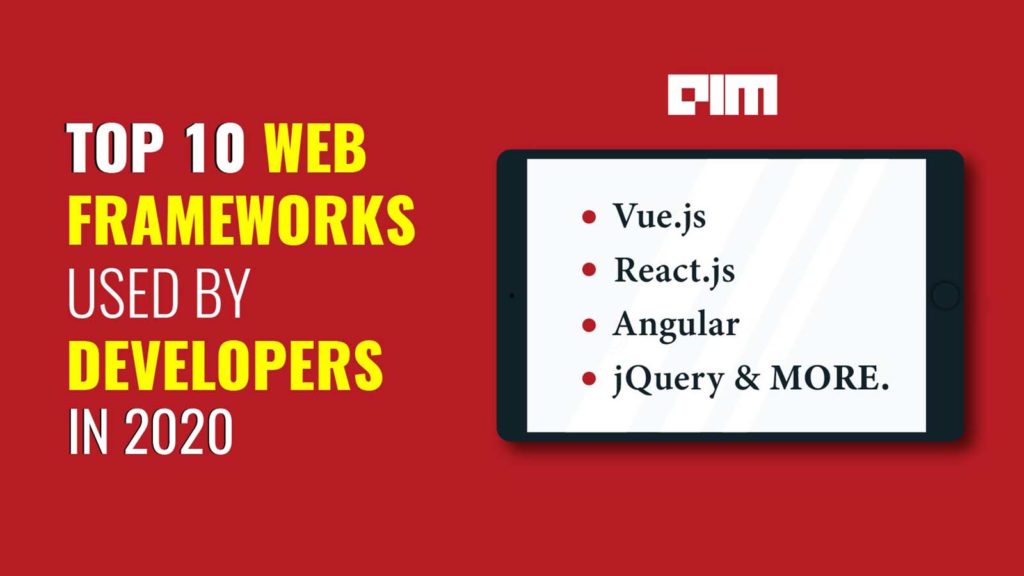 Web frameworks are a crucial part of software development that enable developers to build and create unique features for their web applications. It helps a developer to create applications in a faster and efficient manner.

Recently, the Stack Overflow Developer Survey 2020 surveyed nearly 65,000 developers, where they voted their go-to tools and libraries. Here, we list down the top 10 web frameworks from the survey that are most used by developers around the globe in 2020.

In this article, we list down the top 10 web frameworks used by developers in 2020.

(The frameworks are listed according to their Stars in GitHub).

About: Vue.js is a popular JavaScript framework which achieved the 7th position at the Stack Overflow Developer Survey 2020 as the most used web framework. The framework is used for building user interfaces. The core library is easy to pick up and integrate with other libraries, including existing projects.

Vue.js provides reactive as well as composable view components. It carries tasks including routing and global state management handled by the companion libraries. In this framework, the dependencies of a component are automatically tracked during its rendering process.

About: The survey stated, “When focusing purely on web frameworks, we see that jQuery is still king, but is slowly losing ground to React.js and Angular year over year.”

React is a popular JavaScript library for building user interfaces. It is a declarative, dynamic, and flexible JavaScript library that lets you compose complex UIs from small and isolated pieces of code called “components”. The library scored 2nd position at the StackOverflow Developers Survey this year.

React creates interactive UIs and designs simple views for each state in an application. It builds encapsulated components, which manage their own state and then composes them to make complex UIs. A developer can develop new features in React without rewriting the existing code.

About: Angular is a TypeScript-based open-source web application framework which can be used for building mobile and desktop web applications using TypeScript or JavaScript and other programming languages. This year, Angular scored the 3rd position at StackOverflow Developers Survey.

About: AngularJS is a popular structural framework for dynamic web applications. The framework lets you write client-side web applications and use good old HTML (or HAML, Jade/Pug and friends!) as your template language. AngularJS is basically a toolset for building the framework most suited to application development and is fully extensible as well as works well with other libraries. Angular.js secured the 9th position at Stack Overflow Developer Survey 2020.

About: jQuery is a fast, small, and feature-rich JavaScript library. According to the StackOverflow Developers Survey 2020, jQuery achieved the 1st position as the most used web frameworks among developers.

The survey stated, “When focusing purely on web frameworks, we see that jQuery is still king, but is slowly losing ground to React.js and Angular year over year.”

Some of its features are that it supports both HTML and DOM document traversal and manipulation. The framework simplifies Azax with an easy-to-use API that works across a multitude of browsers. It is a feature-rich web framework that is included in a single .js file.

About: Express is a flexible Node.js web application framework which provides a robust set of features for the web as well as mobile applications. This popular web framework, written in JavaScript, is hosted within the Node.js runtime environment. Express secured the 5th position at StackOverflow Developer Survey 2020.

Express provides mechanisms to write handlers for requests with different HTTP verbs at different URL paths. It also set common web application settings like the port to use for connecting, and the location of templates that can be used for rendering the response, among others.

About: The Spring Framework is a popular open-source application framework that can easily make Java EE development. Spring consists of a container, a framework for managing components including a set of snap-in services for web user interfaces, transactions, as well as persistence.

This year, this framework scored the 8th position at StackOverflow Developers Survey. The web framework provides comprehensive programming as well as a configuration model for modern Java-based enterprise applications on any kind of deployment platform.

About: ASP.NET Core is the open-source version of ASP.NET, that runs on Windows, Linux, macOS, and Docker. The performance of ASP.NET Core is higher than other popular web frameworks in the independent TechEmpower benchmarks.

ASP.NET Core is designed to allow runtime components, APIs, compilers and languages while providing a stable and supported platform to keep apps running. According to the StackOverflow Developers Survey 2020, ASP.NET Core achieved the 6th position as the most used web frameworks among developers.

About: Created by Microsoft, ASP.NET is an open-source, cross-platform framework for building web apps and services with .NET and C#. ASP.NET extends the .NET platform with tools and libraries specifically for building web apps, such as a base framework for processing web requests in C# or F#, web-page templating syntax, and other such. This year, ASP.NET scored the 4th position at StackOverflow Developers Survey.

The list does not end here, beside the above-mentioned frameworks from the survey, there are also a few popular web frameworks which are worthy to be mentioned in this article. They are-

About: Laravel is a web application framework with an expressive, elegant syntax. Laravel is a PHP framework, which aims to make the development process easy without sacrificing application functionality. The features of Laravel include fast routing engine, powerful dependency injection container, multiple back-ends for session and cache storage, database-agnostic schema migrations, real-time event broadcasting and much more.

About: Flask is a lightweight WSGI web application framework written in Python language. It is designed to make getting started quick and easy, with the ability to scale up to complex applications. The framework offers suggestions on dependencies or project layout and the developer is free to choose the tools and libraries they want to use while using the framework.

About: Ruby on Rails is a web-application framework written in Ruby language. The framework includes everything needed to create database-backed web applications according to the Model-View-Controller (MVC) pattern. The framework abstracts and simplifies common repetitive tasks to help the developers in building websites and applications.